The latest news in the world of video games at Attack of the Fanboy
September 11th, 2010 by William Schwartz 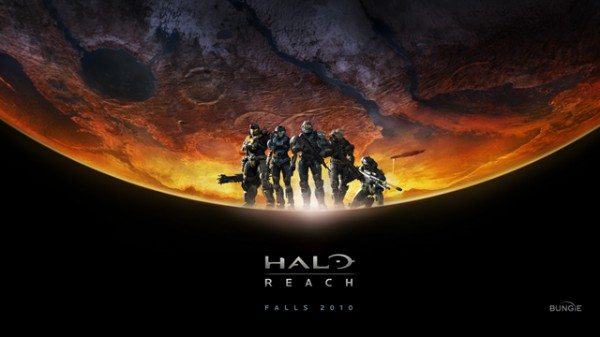 From the beginning, you know the end.  In Halo: Reach, players experience the fateful moments that forged the Halo legend.  It’s the story of Noble Team, a squad of heroic Spartan soldiers, and their final stand on planet Reach, humanity’s last line of defense between the terrifying Covenant and Earth.  This darker story is echoed by grittier visuals amid a backdrop of massive, awe-inspiring environments.  Characters, enemies, and environments are rendered in amazing detail by an all-new engine designed to deliver epic-scale encounters against the cunning and ruthless Covenant.  Halo: Reach was created by developer Bungie Studios, in it’s last installment of the heralded series. [Microsoft]

All things considered Halo: Reach has a ton of good things going for it.  Whether you are a fan of the series or new to the Halo universe, Halo: Reach is certainly not going to dissappoint you if only for the sheer wealth of things to do and try.  Though it’s not only content that is king on the single DVD, it’s the level of polish and thought that is seen throughout the game.  It’s what young developers out there should try to achieve,  and it’s what makes Bungie one of the best video game developers in the business.  Take a slick user interface add great music and then pack in ton of game for both the single player and multiplayer components and you too can sell 12 million copies.

As the Halo series has progressed I felt that Halo 3 lost a little of the magic, and I always felt Bungie got back on track with ODST.  Giving gamers something fresh and different besides the traditional Halo motif that they were used to.  For the first time Bungie called on the player to have an emotional investment in the characters by setting the mood and the atmosphere in such a way that gave you the feeling that you were on against all odds mission.  Bungie took the ball and ran with this in Reach, and it makes for a pretty epic story.  In an attempt to keep this spoiler free I’m not going to discuss any of the story.

From two playthroughs one on normal difficulty, and one on the brutally challenging legendary setting, it’s not very difficult to make the conclusion that this is the definitive Halo campaign.  I personally think it’s the one fans have been waiting for since Halo 2, and it has all of the qualities and so much more that started the phenomenon that is the Halo series.  The scale of the battles stay true to the roots of the game, but are beefed up by the new engine that Bungie has created.  The enemy A.I. in Reach feels smarter than in previous games, and one thing that is easily identifiable is that every level feels like a living breathing battlefield.  The game had better cutscenes than I can remember from previous games, or maybe it was the story in general, but the game had that summer blockbuster appeal.  Perhaps it was the amazing locales that were constructed to form planet Reach, or maybe it was menacing new looks of the Covenant, but there was no disconnect from the story and what was going on in real time.  The player feels constantly connected in the struggle to try and save the planet and it is a great campaign that should get multiple playthroughs considering its CO-OP capabilities.

As far as how the game controls, everything feels tight, there’s no sloppy gunplay or controls to be found anywhere.  Every single weapon on both sides of the fence, whether Spartans or Elite has been tuned to near perfection.  There’s little variance in gameplay whether playing through the campaign, firefight, or the insanely polished multiplayer.  The unsung hero of Halo 3: ODST was firefight.  While the game included the mythic map pack to further the Halo 3 multiplayer experience, Firefight was the icing on the cake of the expansion pack that was ODST.  Being the fan favorite that it was, it has made it’s way to Reach, and this time it has a slew of customizable options and a matchmaking system.  Want to turn off your ability to be injured, and start with unlimited rockets or gravity hammer while facing legendary skilled opposition? You can do that.  You can do just about anything, and it’s an absolute blast.

This is going to be very hard for some people to comprehend, but even in a video game landscape where Call of Duty rules the multiplayer roost, Halo: Reach might be the greatest multiplayer experience on any console bar none.  By experience I’m talking about the whole package.  Hopping into matchmaking you will have options of playing in three playlists.  Competitive, Cooperative, and Arena.  The Competitve Playlist will be where most Halo: Reach players spend the majority of their time as it includes: Rumble Pit, Team Slayer, Team Objective, Multi-Team, Big Team Battle, and Invasion gametypes.  Each of these sub lobbies also contain multiple gametypes, weapon loadouts, vehicles, etc. etc.  The Cooperative Playlist allows you to join other gamers via Xbox Live Gold and tackle Firefight as well as new Score Attack Mode.  The arena now replaces the older and more traditional Halo ranking system.  You will now be assigned a league and season ranking separating the uber elite Halo hardcore from the gamers that take a more casual approach to their Halo careers.  Personally, it’s a welcome change because nothing makes me stop playing a game quicker than getting consistently matched up with players that are kicking my ass.  I think Bungie recognized some of the fundamental flaws in the system of rank in Halo and in exchange for the changes made Halo: Reach can be as challenging or fun as you make it.

All in all, Halo Reach is a great experience.  But here’s what I loved and hated about Halo Reach.

It’s kind of hard not to be a Bungie Fanboy.  They give you so many reasons to love them.  Halo Reach is literally a 8gb DVD that is bursting at the seams with content.  Each and everytime you fire up Halo Reach you can do something entirely different.  With a seemingly endless variety of maps and gameplay options that will satisfy Xbox Live gamers for years to come.  Halo: Reach will likely be alive and kicking long after the next generation of consoles hit store shelves.  What is equally amazing about this title that I think may have lacked a little in previous Halo titles is the parity of the game modes.  The campaign was done extremely well and is just as enticing to sit down and play as Firefight or Multiplayer Matchmaking.

Implementing the new rewards system that allows you to earn points and customizable traits for your character is truly addicting.  When you couple the gameplay of Reach with the new features it’s a game that begs you to come back and play another round.  That is of course if your friends aren’t already doing that.

Change is a hard thing, it’s just human nature.  Bungie changed Halo: Reach enough to give it legs to stand on it’s own but left intact the core greatness that has made the Halo series so popular.  Many times when sequels are made that incorporate the latest fads in the video game world things can come off as unpolished and maybe a little less thought out than they should have been.  Armor abilities and Assassinations come to mind for me here.  It all comes off so well that after you play Reach it’s a little silly to even consider playing it’s previous incarnations.  What I personally liked about the changes are that they felt natural, it all fits into the ebb and flow of the game, not tacked on for good measure.  Armor abilities add a whole new dimension to the standard FPS that the series has brought since its inception.

As good as the new leveling system is and as intriuging as the new credits system is, the simple fact that the credits you earn can only be used towards cosmetic upgrades to your character is a bit of a letdown.  Don’t get me wrong here, I love the direction that Bungie took with Reach’s online leveling system but I would have loved to see things that were hard to earn that could actually help you out in game.  Playing dress up only holds my interest for so long, and I would have loved to see some perks that could be earned.

The DMR and the Covenant Needle Rifle are extremely prevalent in nearly every match.  After about 35 matchmaking , I have 379 kills of those kills 105 were with the DMR and another 90 are with the Needle Rifle.  Add in the fact that I have 42 with frags and another 65 by melee and the trend I am seeing is that I almost always have those two weapons in my hands.  Both of these weapons are welcome additions to the game and they are excellently balanced and pretty fun to use, but there are so many other great weapons at the disposal.  Hopefully they are integrated into matchmaking…Rocketball anyone?

It’s fairly sad to say but I unfortunately haven’t stumbled across anything that I hate that Bungie has integrated into the game.  Kids singing, Halo Reach has it already.  People are probably too good for their own good already..Check.  A steep learning curve until you make to the top of the leaderboards…yeah that’s there too.  As far as what has been programmed into the game, Bungie has polished this game and it shows.

If we did ratings it would be a 10, or a 100, or an A+, whatever ratings language you speak Halo Reach is at or near the top of that scale when you look at the game as a whole. As far as what we thought, we loved it. Well, we love it and it might not find it’s way back into it’s case for some time.  Halo Reach is the next big thing for gamers in 2010 and this game looks and feels like it has the legs to stay relevant well into the twenty teens. Halo Reach will be available for Xbox 360 on September 14th, 2010.