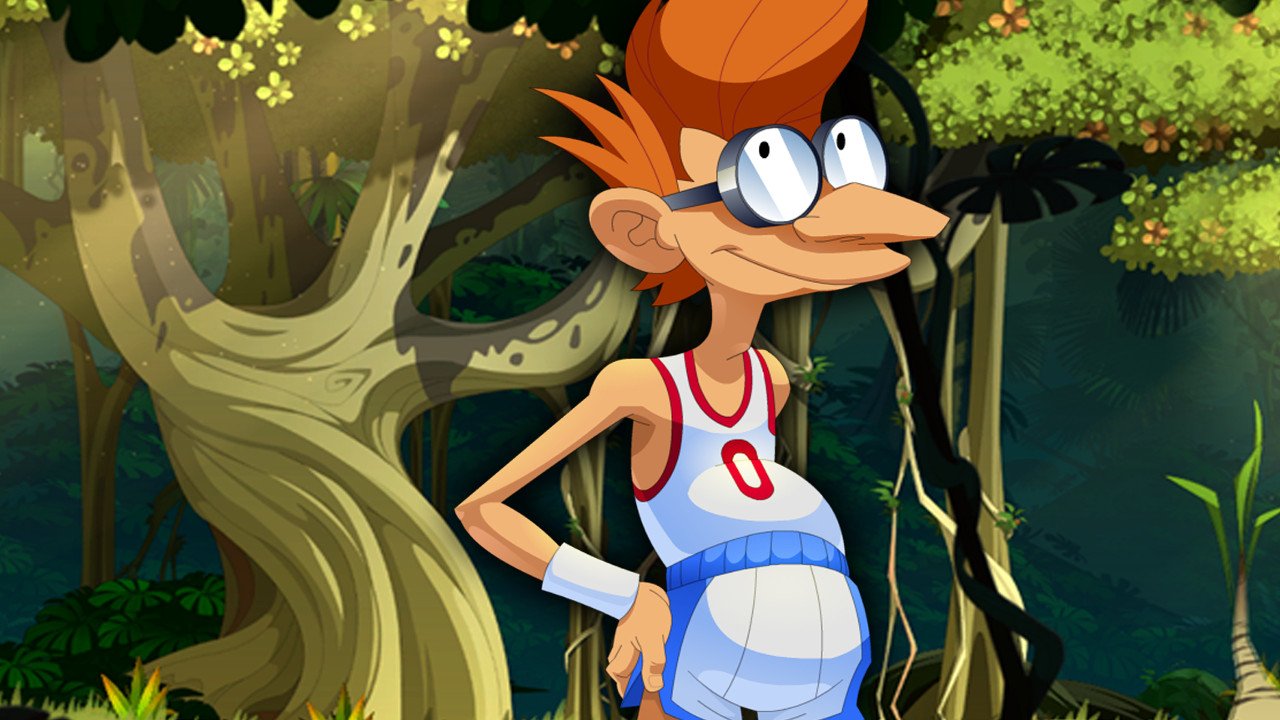 Endless runner games can take one of two very different paths. They can go the simplistic route, offering players very little choice and agency in the gameplay, such as the abysmal Funk of Titans, or they can actually utilize their base mechanics in interesting ways. Harold, the latest game from indie developer Moon Spider Studio, certainly takes the latter route. It has a ton of different mechanics and choices for players to enjoy, and it layers on the complexity as the game progresses. Unfortunately while the developer felt enough confidence in the audience to up the difficulty and complexity, they didn’t give them the choice as to how to tackle the various levels, a major misstep that drags a somewhat enjoyable adventure down into mediocrity.

Harold tells the tale of a guardian angel in training named Gabriel. As Gabriel you will try to help out Harold, a slow, bumbling man who is trying to win a race against much more well equipped runners. Hazards are the name of the game as you try to help Harold avoid the many traps and dangers along the way, while also trying to use them to slow down the competition. 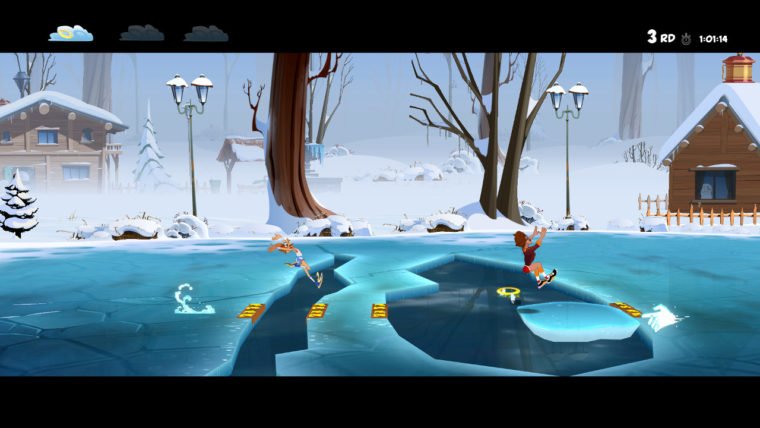 The story of Harold isn’t really anything of great intrigue, simply putting just enough effort into the writing to get the player on their way. The narration that explains all of the action is a different story though. A dull, over-explanatory narrator fills the player in on every thought and action of the people involved. Cutscenes are full to the brim with annoying diatribes about who thought what, when, and why. It’s a small annoyance since the story is far from the center of attention here, but players might find themselves skipping the cutscenes just to avoid it.

The art is yet another total reversal however, as the team has put together a wonderful world filled with color. The animated scenes that are featured between races are pretty fun to watch, as long as the narrator isn’t getting in the way too much. The art and animation is reminiscent of Disney cartoons, in a good way. This art style and animation directly translates into the gameplay, though the scene is pulled back a bit too much to truly appreciate it.

That gameplay is both Harold’s greatest strength, and its greatest weakness. Players don’t really control Harold directly, they can simply make him jump, nudge him along, and manipulate the elements in his path. You can utilize a boost mechanic, but doing so will use up a piece of your health, the only way to refill it is to collect items on the map, or sabotaging your opponents. This creates an interesting risk/reward gameplay element, but since you need to be boosting most of the race, it ends up feeling more frustrating than it should have been. 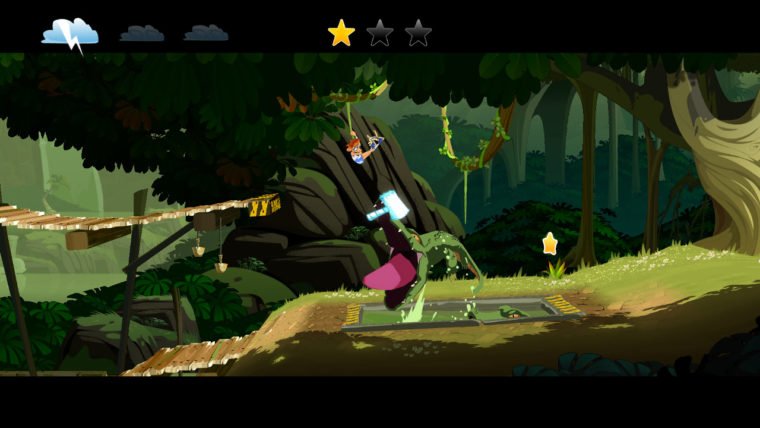 The overall lack of direct control allows for much more pieces for the player to mess with. Move platforms, break down barriers, shift the racetrack to send Harold down a better path. All of these and more are open to the player as the track allows. Along with this you can do the opposite and slow down Harold’s opponents. By cutting ropes, shifting platforms out from underneath them, and causing hazards to trigger at just the right time players are able to hinder their opponent’s progress significantly. When it all works, it works well, offering a lot of things to think about and act on at any one time. However, it can be daunting and leads to Harold having a pretty steep learning curve and a lot of trial and error gameplay.

One way that the developers seem to have tried to avoid this is to force players to play through each level as a practice run before opening up as an actual level. This ends up being an overall detriment though as it slows down game progression significantly. Players are forced to run through each piece of a level, taking breaks to get full introductions to new gameplay elements. Once they have worked their way through the practice stage they can take on the race proper, but at this point most will already be tired of the stage and wanting to move on.

They can’t move on though, not until they complete the race and come in third place or better. Even having gone through the race in a more controlled environment, players will still find themselves making minor mistakes that cost them precious time. Adding in the other racers on top of the already fairly complex stages ends up creating a hectic atmosphere, where players have to keep track of multiple moving objects and the many manipulatable areas of the level. 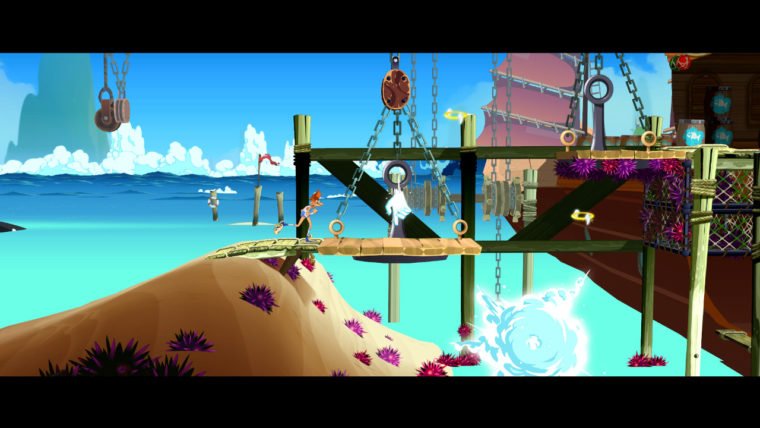 For those seeking a more difficult, or time consuming game, Harold will certainly fit the bill. Some races will definitely require a few playthroughs to get things right, and there are plenty of optional objectives to keep you busy. Despite having run through the levels in practice, there is still some feeling of trial and error, where figuring out the best way to go, while keeping your opponents behind Harold ends up requiring too much of the player. This, combines with the precision required for some of the maneuvers to form a very frustrating formula if you aren’t able to finish the level on your first few tries. If you are easily frustrated, Harold might not be the best game for you.

Harold could have easily ended up as a very different game. Endless runners are usually simple, quick experiences that are best on mobile devices. But thanks to a lot of added gameplay elements and a great looking art and animation style, Harold stands out as worthwhile for those looking for a more difficult game. Unfortunately that difficulty can also become tedious and annoying, and the forced practices, along with some other missteps hold the whole thing back from being enjoyable for everyone. Harold might be worth checking out, but only if you are really needing a more bite-sized and taxing gaming experience.