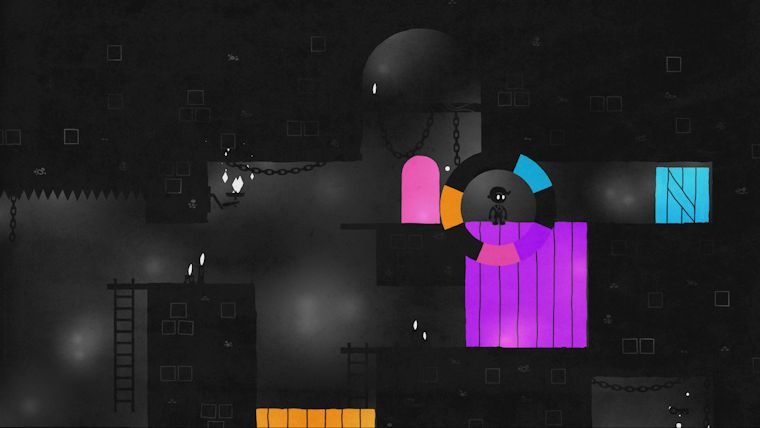 Puzzle platformers are not as common as they used to be, but there are still plenty of them out there for those that really enjoy them. The key to any great game in this genre is to have some sort of unique mechanic that defines the gameplay experience. Fiddlesticks Games is one of the new kids on the block in the development scene and they aim to provide players with just this in the very colorful Hue.

The name Hue is a great indicator of the basis of the game, as everything is based around a color wheel that the player has control of while playing. At the very start of the game, the world is entirely grayscale with black backgrounds. The platforming here is linear and simplistic, as the player is just moving from one screen to the next, which does allow you to get a feel for the minimal controls in the game.

Where the game really changes however is the introduction of the first color to the game, which will then allow you to advance further. While all you could do before is move and jump, now you can change the background color at will. This is done by holding the right analog stick in a certain direction and then moving it towards that color and letting go.

At first, you can only switch between the first color and the original black background, but this all gets much more complicated as more colors are introduced. In total, the color wheel holds eight colors that you will run across throughout the game. A few are just different shades of existing colors, such as a darker blue, but they all are considered completely different in the world of Hue.

The way these colors are used throughout the game are very reminiscent of last year’s Runbow, where changes in background colors affect platforms and other objects that you must utilize to make it to the end of each area. The big difference here though is that you have full control of the colors instead. Rather than having to memorize patterns and make a quick run through areas, the puzzles here allow you to take a little more time and think about them.

Throughout Hue, you’ll come across colored objects that you can move and others that you can move. By using the color wheel to change the color to that object, it will disappear as a result of being the same color as the background and allow you to move through it. For the immovable objects, you can just keep moving on, but often you will have to use this trick to also get on the opposite side of a box so that you can move it closer to a wall.

Boxes play a big part in Hue, as they are very often required to get to higher platforms. They come in all colors, including even a black one that you will have to work around due to black not being a part of the color wheel. You have the ability to push or pull these boxes, with you often having to change colors multiple times to move around a group of boxes into the order necessary to climb up to a higher area. 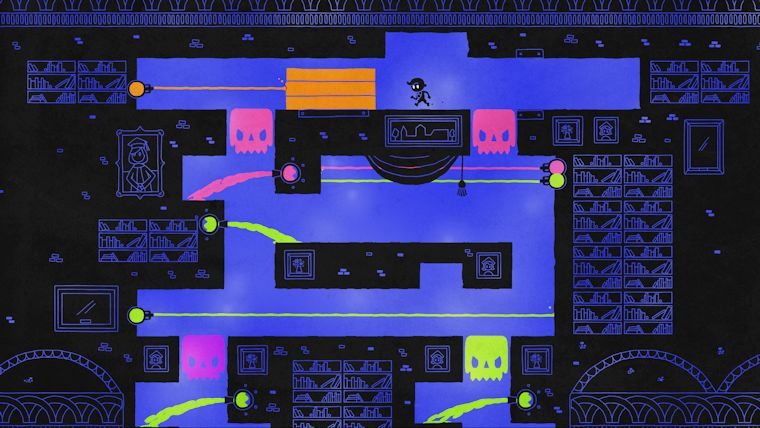 The biggest problem in Hue is that it can get pretty repetitive at times. More colors are consistently introduced until the wheel is filled up, but the overall gameplay remains the same for long periods of time. The good thing is that the game does eventually add other gameplay mechanics that help to not only break up the monotony, but also increase the difficulty level.

Overall experience is well worth the time

The laser sections are a great example of this, as they manage to add in another way to kill you, beyond the usual spiked floors or ceiling, which makes you have to think much more quickly on your feet. Another mechanic introduced feels like it is inspired by Portal, as paint will be shooting in a direction that will change the colors of your boxes. This gets really intensive as you’re going between different paint areas and different boxes, which provides a solid challenge for most anybody.

Hue does have a little bit of a story within the game, but it’s mostly relegated to little bits of exposition here and there that are interjected as you’re running between rooms. This is almost like how the somewhat similar Thomas Was Alone handled story in a puzzle based platformer, but it was featured much more than it is within Hue. The minimal amount of dialogue fits well in Hue though, as players instead get to focus on the hauntingly beautiful piano score during the game. 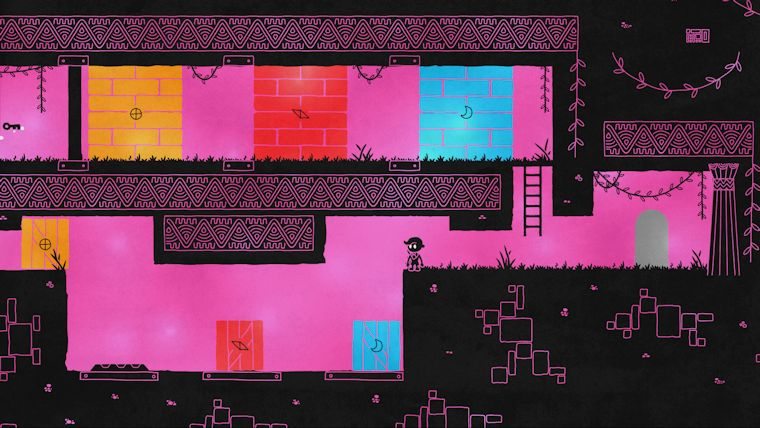 One neat little feature that Hue includes is known as Colourblind, which you can enable in the options. With a game build completely around color and changing them throughout, it would be near impossible for someone that is colorblind to play. However, this setting adds a special symbol to each part of the color wheel and the objects that correspond to them, making it possible to enjoy the puzzle elements of the game without color itself playing a part at all. This is something they absolutely didn’t have to do, but it really is a nice gesture to not leave those with colorblindness out.

Making a game that stands out from the rest of the crowd can be rather difficult, and while Hue definitely draws inspiration from other games, the overall experience is well worth the time. The adventure starts off at a slower pace as the colors are gradually introduced, but as the gameplay picks up the deeper you get into the game with well designed puzzles, all accompanied by a fantastic instrumental score, Hue really shines bright as an example of a puzzle platformer done right.