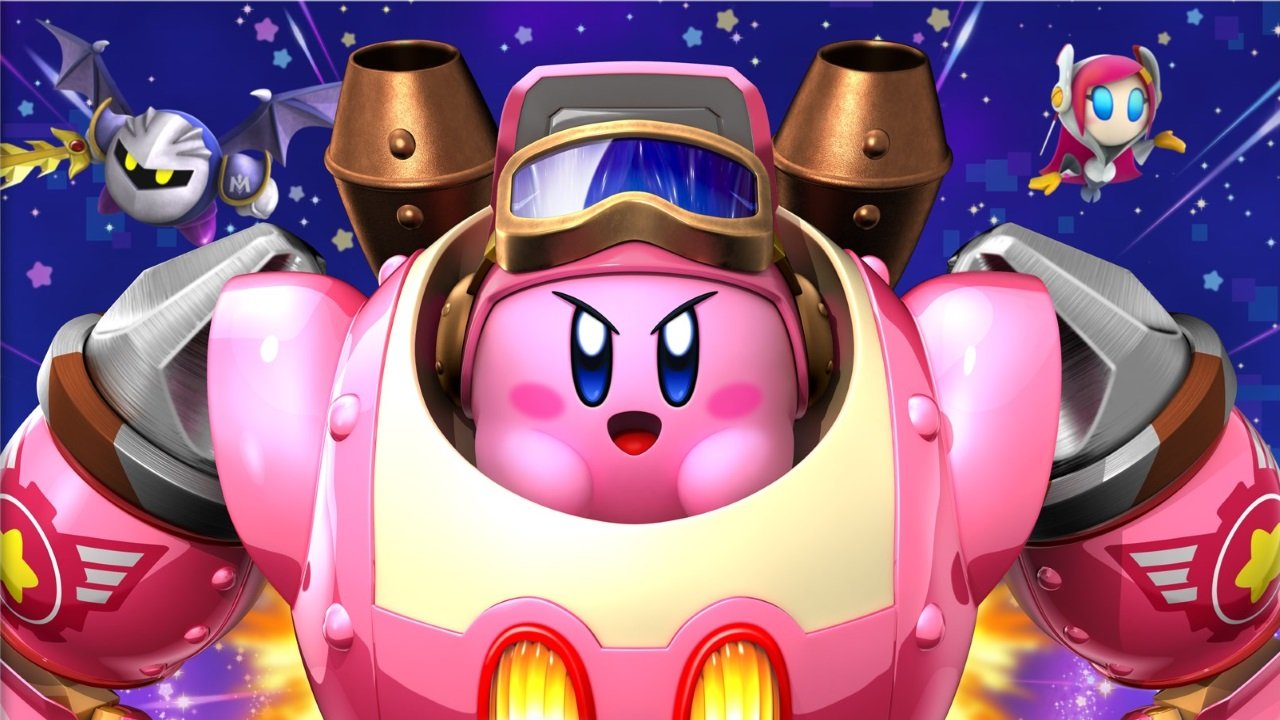 The Nintendo 3DS is fast approaching the end of its life, with rumors of a successor already swirling around the internet. With this sort of shift, it’s no surprise that game releases have slowed, though the overall quality has continued to remain steadily high. Nintendo has been reaching into their catalog of characters and universes, and pushing out some truly fantastic handheld titles. Some of these are full of fresh ideas, breaking through boundaries and innovating heavily. Others are more tried-and-true classics, utilizing a familiar formula to give players something that is sure to please. Kirby: Planet Robobot is firmly in this latter category, refreshing the series a bit, but still just delivering on what fans have come to expect. If you want a nice, action-packed 2D platformer then this is right up your alley.

Kirby: Planet Robobot tells a very simple and straight forward story. Kirby, his friends, and their entire world are under attack, so Kirby sets out on an adventure to stop this mechanized menace. It’s all told quickly, with the quest kicking off within the first few minutes of booting up the game. Some cutscenes add more to the story later on, but overall the plot isn’t anything to really worry about or pay much attention to. 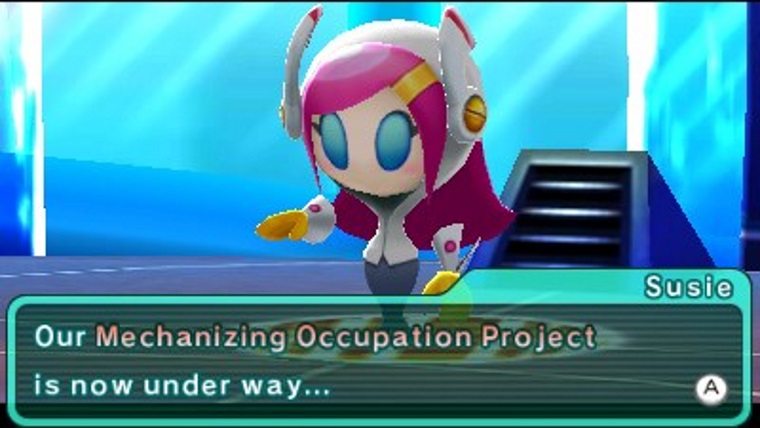 And really, that’s how it should be for a game like this. Kirby: Planet Robobot is classic Kirby from start to finish. While the franchise has become synonymous with quirky innovations, like the use of the 3DS and Wii U touch screens, or the franchise’s foray into yarn style graphics, this game sticks to the basics, with only a few additions to keep things feeling fresh.

Kirby: Planet Robobot is classic Kirby from start to finish

That formula includes series staples like Kirby’s famous copy ability. There are over 20 different powers that Kirby can steal from his enemies, with a few of these being brand new to the franchise. This isn’t as wide a variety as we’ve seen in some games of the past, but that also means there are fewer useless ones. However, that isn’t to say there aren’t some powers that feel useless or underpowered, they just aren’t that common.

Overall the abilities that Kirby can use are a lot of fun, with some standouts being the Indiana Jones style whip, the perpetual favorite electricity, and a fantastic new psychic power. Once you get one of these really good powerups it’s tough to let it go, so you end up spending a great amount of time avoiding damage and snatching your powerup out of the air if you do get hit too hard.

As far as where and how you’ll use these powers, the levels in Kirby: Planet Robobot are fairly middle of the road. There’s not too much that stands out here, though there isn’t anything too detrimental either. The level design is solid, but a little underwhelming if you were looking for something truly inspirational. One of the more enjoyable aspects of these levels is the use of the background areas, which you can warp to via special stars. Sometimes there are things going on on both levels of the playing field that require your attention, and working through these sorts of puzzles can be quite fun. 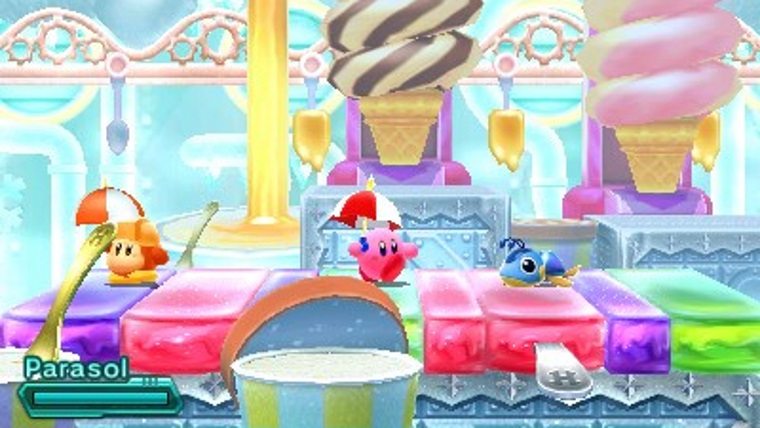 Alternatively, Kirby: Planet Robobot throws a lot of unique levels at you that actually do spice things up significantly. Every once in a while you’ll switch from the standard 2D platformer formula to something quite different, such as an R-Type style shoot ’em-up. These still aren’t completely impressive in the design area, with them being a little basic and very easy to get through, but they change up the formula enough to keep your attention throughout the game.

The much larger change to the overall formula is the new robot suit, which Kirby will find at various times throughout the game. Almost every level has some section, either big or small, where Kirby will jump into the mech suit and start tearing the whole place apart. While the robot’s punches are truly devastating, what makes this gameplay especially fun is when you copy an ability.

All of the standard copyable abilities can be used by the robot as well, and they are really something to see once you begin unleashing them. The action gets pretty intense, though things never get to a very fast pace. Instead it’s more of the calm, slow gameplay that Kirby is known for, just with a lot more explosions, and less worry about dying. 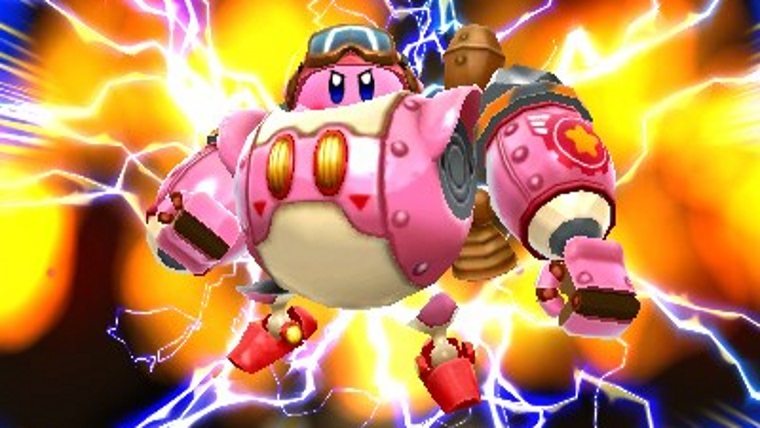 In fact, you won’t worry a whole lot about dying at all in your time with Kirby: Planet Robobot. The game follows the other Kirby tradition of being a fairly easy affair. Nowhere near as simplistic as Kirby: Epic Yarn, but you’ll still very rarely die or even be in danger of it, aside from when you fall into a bottomless pit. But even this is pretty tough to do since Kirby can essentially fly through the level, which always seemed like an odd choice for a platformer.

What helps is that each level has a lot of unlockables and secret items to gather, such as stickers that can be used to decorate your robot. Figuring out the extra challenge of where these items are, and how to get them adds some much needed difficulty and depth to Planet Robobot. Still, Kirby isn’t really meant to be a tough challenge, with it more serving as a relaxing adventure through a colorful world. While finding all of these might be tough, most will pop up just through normal play, making most players probably skip the stress of finding all the rest of the secrets hidden throughout the land.

Thankfully that land is truly colorful. Vibrant landscapes leap off the 3DS screen in all the glory a 240p video can in 2016. The visuals are actually pretty great, though when 3D is on and the mayhem starts getting out of control the framerate can dip a bit. Overall though the performance is great, and the vivid, bright levels will easily impress. And with classic Kirby tunes blasting throughout, fans of the series will really get a kick out of the entire visual and audio suite. 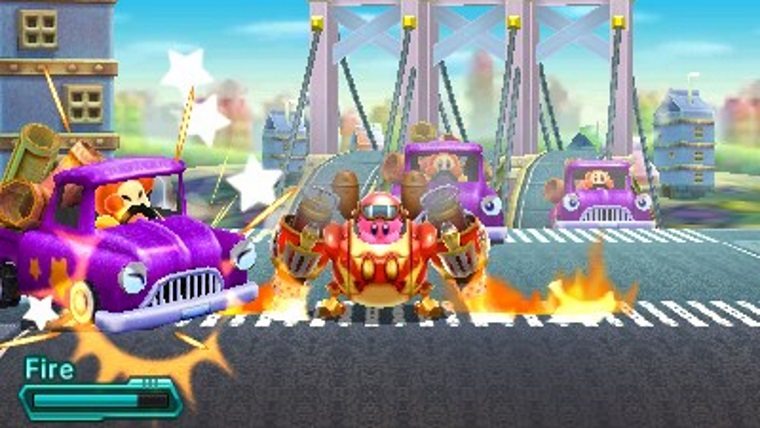 Outside of the main game are a few extra modes, and a few unlockables. It seems that Nintendo and HAL Laboratory just couldn’t resist doing a little bit of innovation, so they tossed in a pair of 3D and RPG styled minigames. The former is a nice diversion, giving you something unique to try out, and a lot of score counters to try to perfect. The latter is actually an intriguing multiplayer mode that tasks you with fighting some very tough bosses. Few players will really dive into these all that much, but they are nice additions nonetheless.

Kirby: Planet Robobot is another classically designed 2D platformer for series fans to gobble up. If you’ve enjoyed any Kirby game in the past, and have been craving some more, then this will be completely worth your time. For those who haven’t tried out the series before, Planet Robobot is a great place to start, presenting players with a lot of the things that made this series so much fun in the first place. Still, it is not a challenging game to say the least, and the overall level design isn’t stellar, unless it’s playing around with the dual landscapes a whole lot, or really pushing the mech suit to its limits. In the end, Kirby: Planet Robobot is another solid 2D platformer, with some nice bonus pieces that make it stand out as a favorite of the genre.

3Ds kirby New Nintendo 3DS Nintendo
You May Like