The latest news in the world of video games at Attack of the Fanboy
June 4th, 2015 by Emily Speight 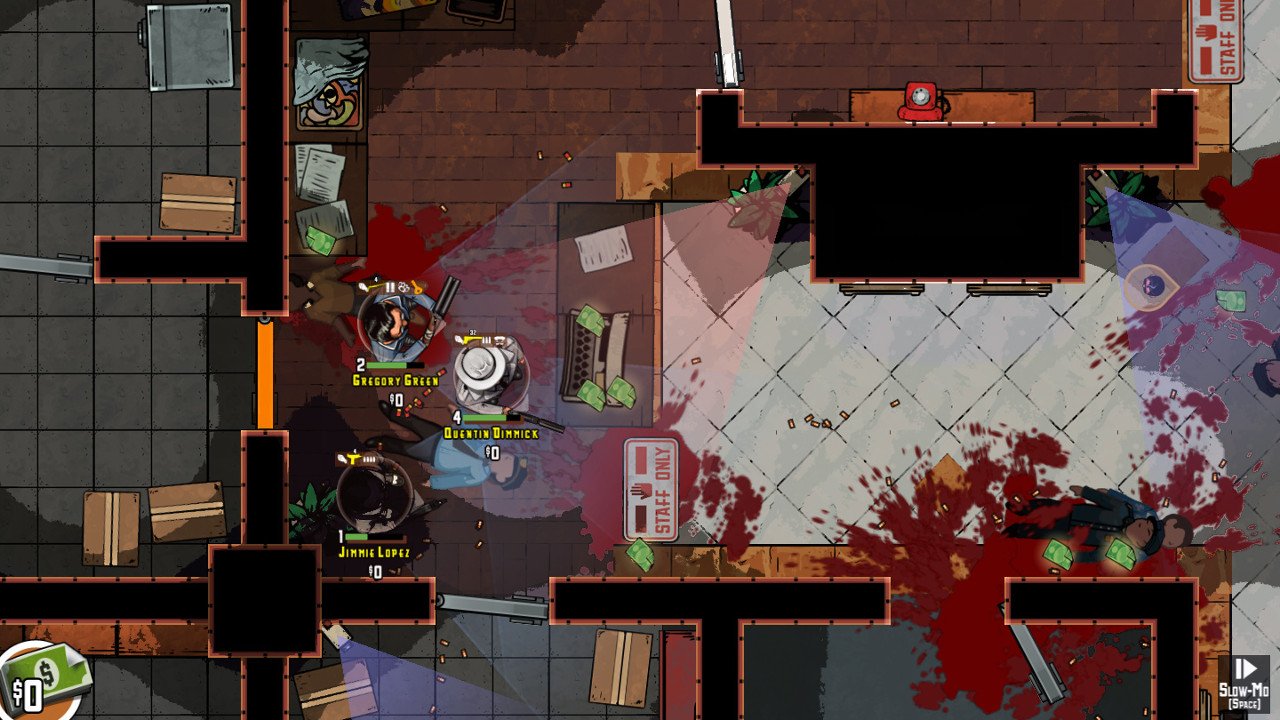 Shark Punch, masterminds behind Playfield, have today launched their first full game, The Masterplan — no, not the Oasis song. The Masterplan has successfully concluded a nine month gestation period in Early Access, and today debuts as a fully-fledged game. Responsible for both its development and publishing, the Helsinki-based team have promised to continue to support the game by adding updates and features.

The Masterplan is a top-down tactical squad-based game that plays out in real time. Players are tasked with pulling off a series of increasingly daring heists throughout a branching story. Initially, the player will only control Joey and his brother Gregory, but it quickly becomes apparent that two goons alone are not enough for the increasing stakes, and that more help is needed. If things get too hectic during a heist, you can press space to enter a slow-mo mode that allows for more planning. Once the police arrive and the gunfire erupts, though, all plans are out and the game becomes a mad, kill-or-be-killed scramble for escape. 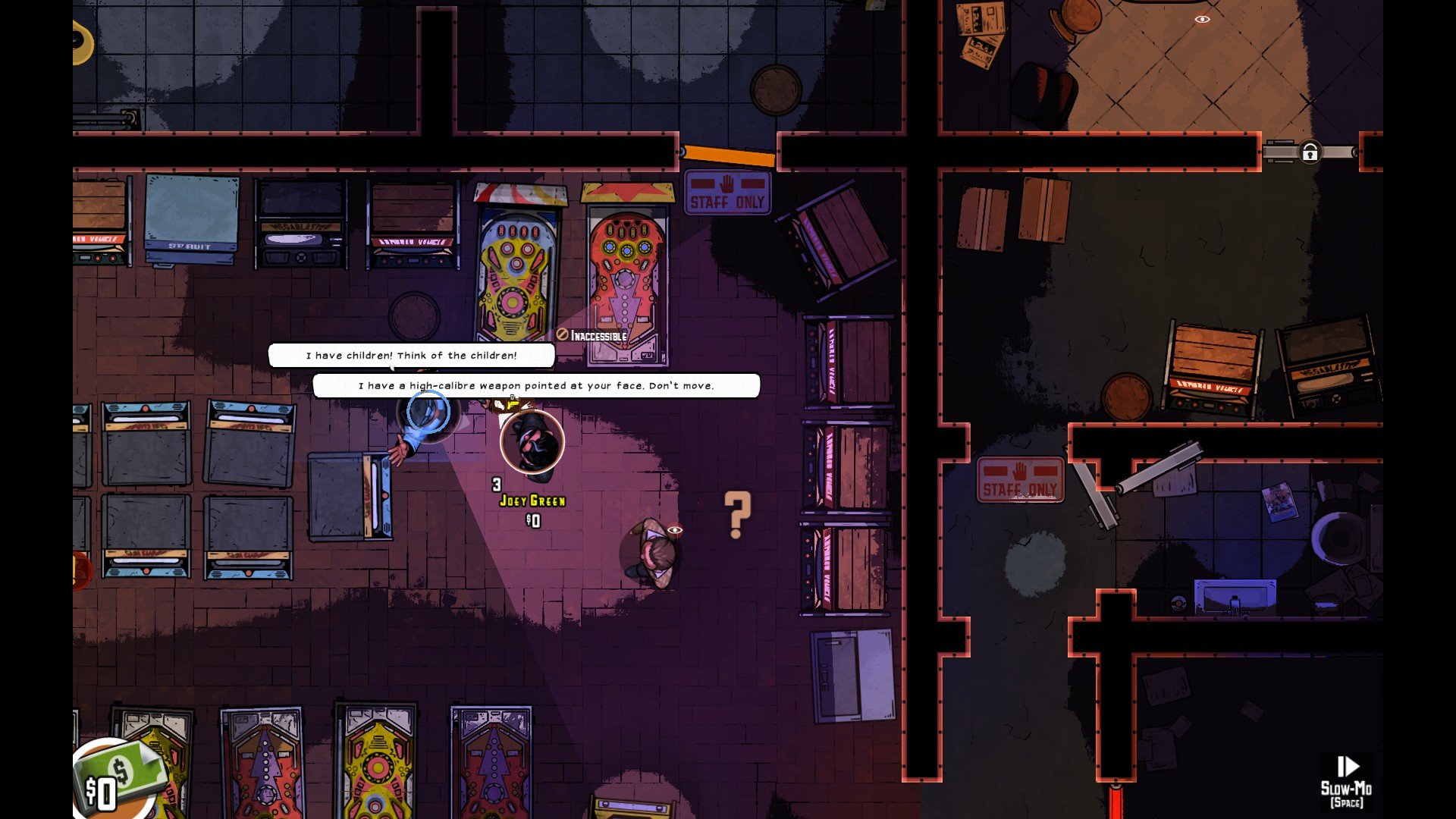 Owing in part to it’s top down nature, The Masterplan’s controls do take some getting used to. The tutorial isn’t substantial enough for this purpose, and tooltips seemed to come and go at odd intervals. Pathfinding when selecting multiple goons can sometimes go painfully awry, leaving them spinning in place like broken compasses. Once you have, er, mastered the controls and learned to closely monitor which goon is selected, however, The Masterplan becomes a satisfying experience. Early heists are smalltime, while later heists continually and appropriately increase both the potential reward and risk.

The Masterplan is set in 1971 and has both the vibe and the soundtrack to match. It simply couldn’t be a seventies game without groove, and Shark Punch have delivered admirably on this front. Have a listen to the Hideout theme below and see if you don’t need a shower afterwards to combat all of that wonderful seventies sleaze.

The hideout is where your goons lay low between missions. It’s dingy, grubby, there’s rats, every last inch of it is gloriously authentic. Weapons and ammunition are purchased through a dealer on the other end of a rotary dial phone, with new goons — they are not crooks, of course — hired from another line. When and what you decide to purchase is largely left up to you, which is thanks to game design that is equal parts excellent and meticulous.

A lot of love has been poured into The Masterplan and the area where this is most apparent is the game’s graphics. All of them have been hand-drawn and the attention to detail is beautiful. This detail has come at the sacrifice of some originality, as many assets are recycled. This mostly isn’t an issue, except when it comes to civilians. It would have been nice to see more variation in their appearance. Battle Brothers, to choose another Early Access game as an example, utilizes a similar style of art. It is drawn in parts or pieces and then combined to generate semi-random character appearances. As mentioned earlier, though, Shark Punch has committed to continued work on the game post-release, so this could be a matter for a future update. 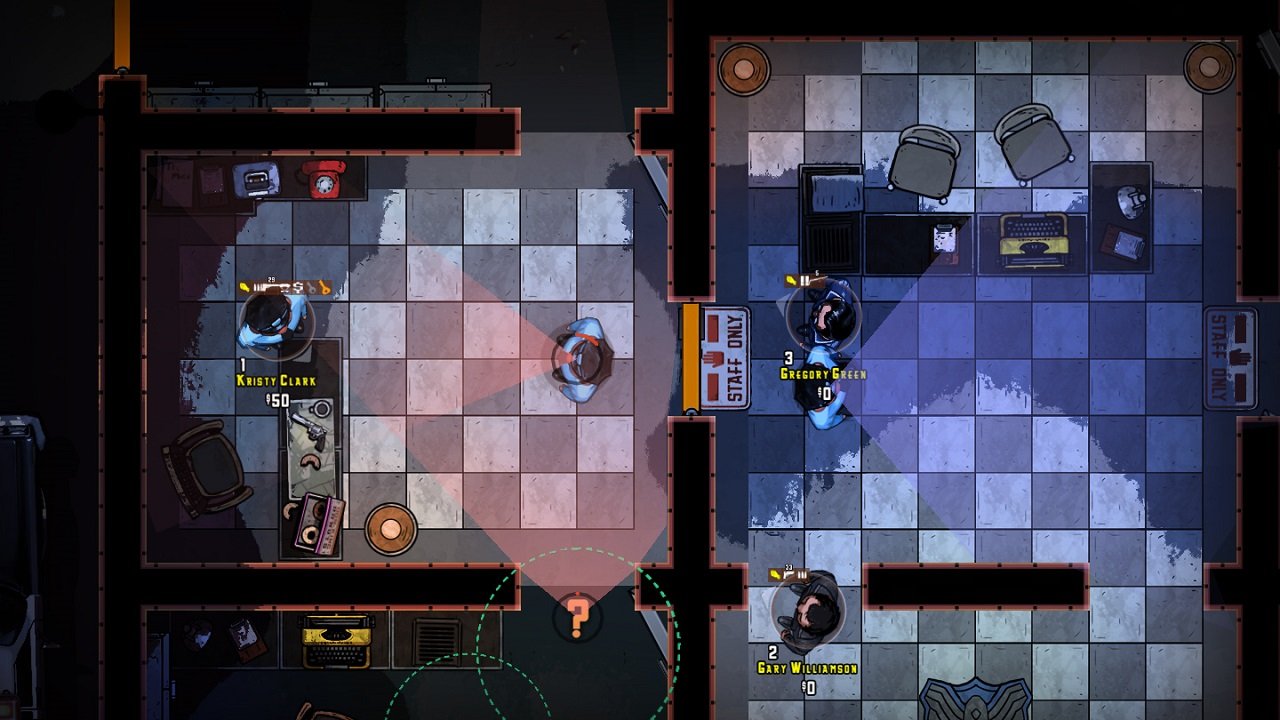 Heists themselves are open-ended, which is the game’s greatest strength. Players are given objectives that act as guidelines but left to complete the mission in their own way. My approach was one of non or minimal violence and laying low. My goon’s weapon of choice? A fake gun. Staking out a diner, I was able to steal a bathroom key. It was considered harmless, left in the open, and therefore an ideal advantage for me. I posted two goons in the bathroom: one with the key, the other with the fake gun. When the owner entered the bathroom, one goon locked the door shut and then subdued the owner, while the other rendered him powerless to resist by continually threatening him with the phony firearm. With the owner unconscious and his pockets picked clean, my goons stepped out and locked the bathroom door, keeping the owner contained and away from prying eyes.

Had I not been feeling so merciful, I could have brought my third man into the diner, armed with a shotgun, and killed the owner outright. I could have armed all three goons and performed a full hold up, directing hostages to serve everything to my men on a platter. Or I could have mixed all three strategies. Inventory among goons is managed simply by dropping and picking other objects up, so items can be exchanged and roles can be swapped on the fly. There is a minimal attempt to differentiate between your goons through use of a three star stat system. Nothing I played required anything but an average Joe and a good plan, however. 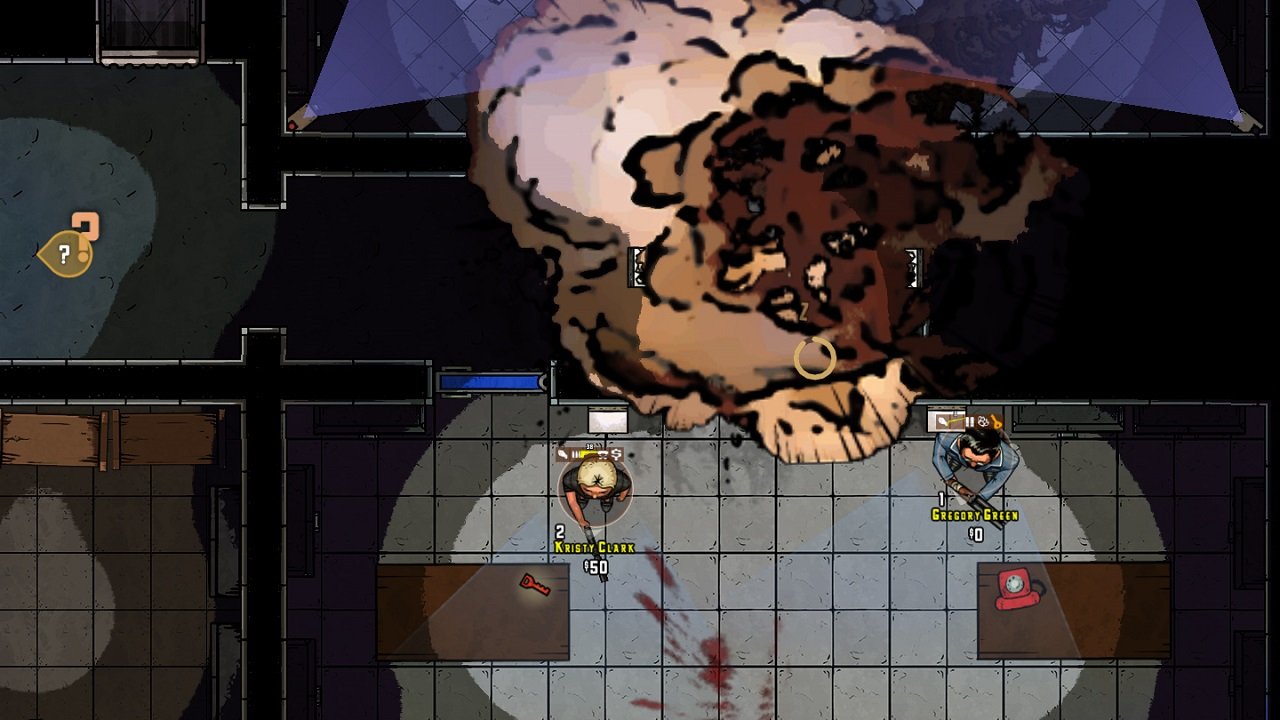 At it’s best, The Masterplan feels like what the Payday series set out to be before focusing more on the first person shooter aspect: tense, fast-paced and open-ended. This open-endedness is occasionally a double-edged sword for The Masterplan, however, leaving you unsure how to proceed, as objectives often lack detail. On escaping a robbery, you are presented with a screen showing how much you looted against the total amount to be stolen. One-off lootables are factored into this, so players can be stuck combing levels for things that are no longer there for a perfect score that has been made unattainable.

The Masterplan is an open-ended heist game that is genuinely fun to play. It has some teething issues, but with continued support from its developers it can only go from strength to strength.