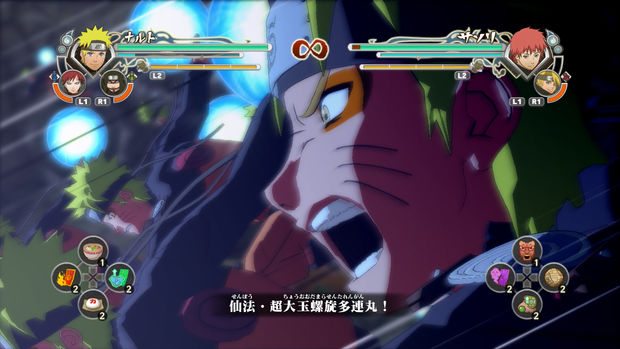 For nearly a decade Cyber Connect 2 has been developing the “Ultimate Ninja” fighting franchise on the PlayStation 2,3 & now Xbox 360. The Naruto Shippuden series stems from the long running animated manga by way of Studio Pierrot in Japan. With a decade of content behind them, Naruto Shippuden Ultimate Ninja Storm Generations looks to capitalize on all of that Naruto goodness, with exclusive content from Studio Pierrot made specifically for the title. The always fun and unique fighter has a ton of content to draw on for “Generations” but the question is: can it live up to the expectations and high bars set for this long running franchise.

Whether you’re a fan of the franchise or just getting started, “Generations” offers a ton of content in the form of its fighters that spans multiple generations within the manga’s timeline. With 70+ to choose from and 15 support characters, the lineup is indeed massive in this rendition of Naruto. Drawing from Ninja Storm 1 and Ninja Storm 2, even the hardest of hardcore Naruto fans may find a new unfamiliar face among the bunch. That said, with such a large lineup, you may also find a bit of redundancy in the characters as well. Multiple versions of Naruto at different courses of his life, as well as the same service for other popular fighters on the roster.

At it’s core, Naruto Shippuden: Ultimate Ninja Storm Generations is still the same 3D fighter. CyberConnect2 uses wide open landscapes as arenas to do battle, and the controls are relatively easy to master. Single button combinations can be altered on the fly with input from the left stick, and like most modern fighting games you’re constantly looking to turn the tide of battle with specials. In Naruto, these specials are called Jutsu which is essentially a special that your character can activate with multiple variations strewn throughout the massive character roster. What you aren’t going to find in Naruto Shippuden is the balance that you do in other fighting games destined for e-sport glory. Naruto is a much more exciting experience visually than it is cerebral. That said, there are probably better alternatives for the competitive fighters out there. If that’s not your bag anyway, Naruto is a hell of a lot of fun to play online and off, and it’s art style stands tall in a crowded genre.

Taking the battle online, players will have the ability to play in Tournaments and Endless Ninja Battles. Online lobbies are pretty standard fare nowadays, but “Generations” will allow you to view other battles in real time from an online lobby. This is important in a game like Naruto that is equally fun to watch as it is to play. You’ll be able to choose from player and ranked matches which will give you different options for each. Player matches are much less competitive, as they do not involve the Battle Points system, but will let you enter into the larger lobbies for “Endless Battles”. Stepping into the Ranked Arena, you’re going to have quite a few more options to explore with Battle Points, Wager Matches, and the Ninja Card system. These Ninja cards which come bundled with “Generations” offer unique buffs for your fighter; boosting offense, defense, jutsu, and others

Offline is probably where long time fans are going to find the most difficult changes to swallow. There’s little exploration in “Generations”, the single player experience while lengthy, is a series of fights that are set apart only by narrated cutscenes. Naruto Shippuden Ultimate Ninja Storm Generations still has a massive story to tell, but personally, I would have liked to have seen more detail placed on the single player aspects of the game outside of the fighting. Where Naruto games in the past have featured impressive quick time events, these slideshows take their place for a bit of an undercutting blow to long time fans. The rewards in the offline modes are many. Playing through each portion of the single player will reward you with characters to take with you into the online playing field.

The complaints are minor in Naruto Shippuden: Ultimate Ninja Storm Generations making this one of the best versions of the fighter. The pick up and play 3D fighter is easy to learn, hard to master, and beautiful throughout. The omission of some features of previous Naruto games left portions of the single player game feeling somewhat dry, but didn’t dampen the fun one bit. For players that are looking for the “Ultimate Ninja Storm” experience, this is probably it.