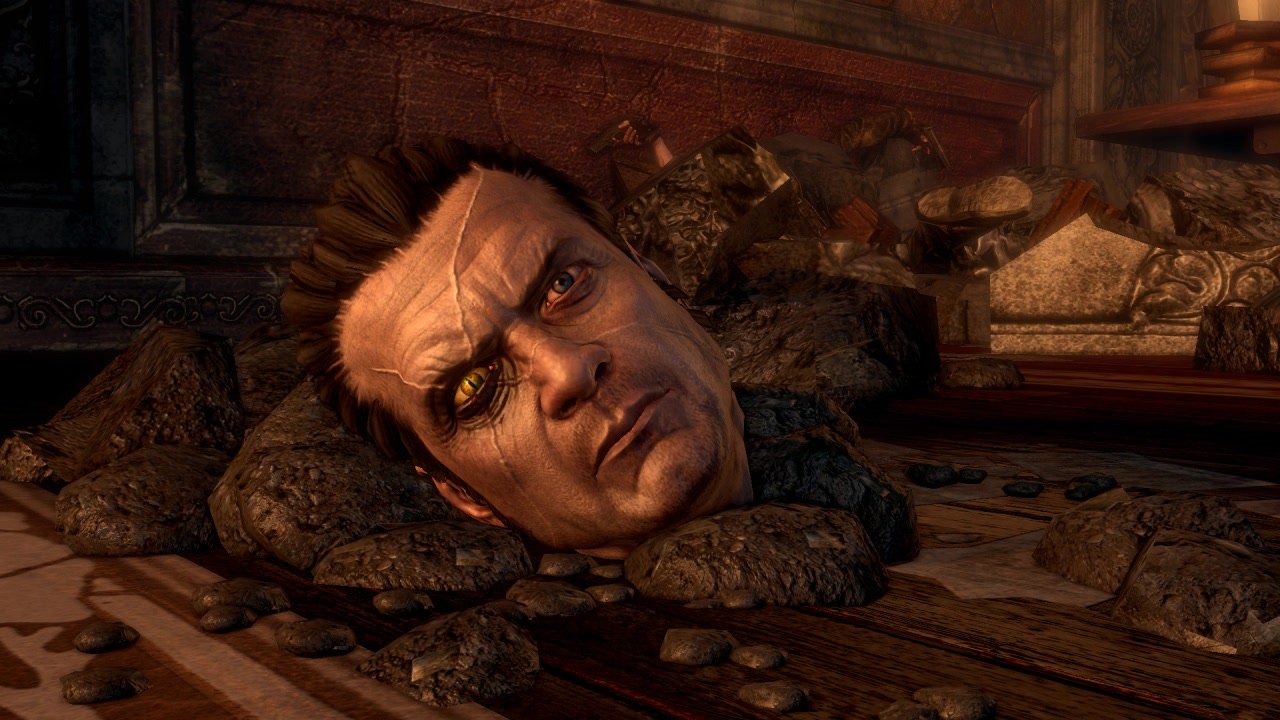 As gamers we all have this propensity to expect new and unique experiences from the developers and publishers that shape the landscape of gaming. Rebellion and Konami looking to capitalize on this very notion offer up NeverDead, a third person shoot-em-up that definitely offers a unique twist on the tried and true genre. It’s major hook, you’re never dead. You play the role of immortal demon hunter Bryce Boltzman, who features a very unique set of combat skills. These include the ability to detach your own limbs, and turn them on your foes. A interesting twist indeed, but is it enough to have just one brilliant idea to carry a gamer through hours of gameplay?

If NeverDead has one thing going for it, it’s the game’s unique twist on player health. Fights with demons often result in the loss of limbs or the complete dismemberment of your character. Exploding into pieces, you’ll need to roll your severed head around the area to collect your limbs to get back into the fight. It’s an interesting gameplay mechanic to say the least. It’s peppered in with very basic point and shoot third person run and gun style gameplay, that’ll have you mowing down enemies to close “demon gates” and clear areas before progressing to the next. It’s pretty standard stuff really and Rebellion rarely strays far from these core elements.

The dismemberment features don’t apply specifically to combat. The designers also use this feature for rudimentary puzzle solving as well. Using an electrical current, Bryce can detach his limbs where you can then navigate to areas by rolling and bouncing his head through obstacles. If it sounds at all weird, it is, but it works relatively well as most of the ideas are very basic.

The game incorporates demons that will try to suck your head up with a vacuum like vortex that adds some consequence to the fighting, but offers you a mini-game as an out in the case that you do get caught off guard by the spore like creatures. Your game can also come to a crashing end if you fail to protect your mortal companion, Arcadia.

You’ll have plenty in your arsenal to do the trick. Using your own body parts is just part of the equation. Enemies have different weakness, and some are immune to your dual-wielding gunfire. For these instances, you’ll have to turn to your blade, which can be used for a disorienting and often times uncontrollable melee attack. Throughout the combat you’ll be frequently dismembered. It’s part of the fun of the game actually. Hopping on one leg while trying to recover your body parts to get you back to full power is a fun novelty to the gameplay…at first.

As it wears off, you’re left with very little substance in NeverDead. A forgettable cast and cliched story take center stage as I struggled to ever really become involved with the characters or plotline of the game. Littered with bad one-liners from the protagonist, and failed attempts at humor, the main character is just not very likeable. Coupled with the lack of polish in the gameplay department, NeverDead fails to really engage the player past that initial moment of explaining the core mechanics of the game.

Boss battles are uneventful execrises in repetition, last far too long, and showcase very little that hasn’t already been seen somewhere along the way. It’s the lack of polish in these other areas of the game that really bring down the core ideas primary mechanics. Instead of expanding on what could have been a cool new way to play a third person shooter, the game continually gets dragged into redundant and boring sequences that ultimately lead to more redundant and boring sequences.

Ultimately the one core idea behind NeverDead just isn’t enough to compensate for the wealth of mediocre and downright poorly executed gameplay mechanics. While you might get a kick out of the interesting new dismemberment features, they’ll likely wear on you for the lack of evolution within the game, past the opening moments. With little by way of story to pull you into the game, NeverDead could leave you feeling somewhat “detached” /s