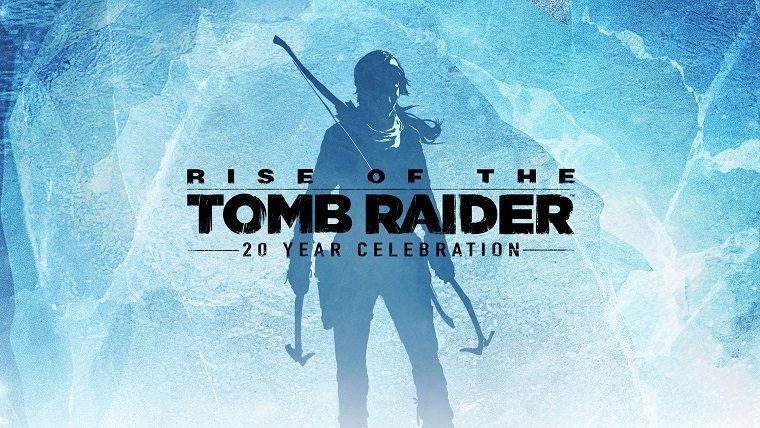 PlayStation 4 gamers were left out in the cold when Rise of the Tomb Raider launched on Xbox One and remained a console exclusive for nearly a year. As the game released to critical acclaim all they could do was sit and watch, and the game’s consistently solid DLC support only made the wait more brutal. However, the game is now available to PlayStation 4 owners in a new package called the 20 Year Celebration, and its wealth of quality content easily makes up for the delay.

Rise of the Tomb Raider: 20 Year Celebration not only comes with the main game, but all of the previously-released DLC and even a brand new one called Croft Manor. The amount of content that is being offered here at the standard $60 price is truly impressive, as it is all well worth digging into. However, the main course is what PlayStation 4 gamers have been waiting the most for, and that is where we’ll begin.

The game picks up one year after the events of the 2013 Tomb Raider reboot, and Lara is struggling to describe what happened to others during the events of that game. Her search for answers results in her diving into her late father’s research, where she then becomes engrossed in his unfinished mission of finding the lost city of Kitezh and the promise of immortality. Those close to her warn her that this research drove her father insane, but that doesn’t stop her and soon we’re on an expedition to Syria to uncover the tomb of the Prophet of Constantinople. Of course, Lara isn’t the only one searching for this tomb, as an evil organization called Trinity is hot on her tail. This results in the game becoming a race between the two parties in a setup that quickly leads to the frigid region of Siberia. 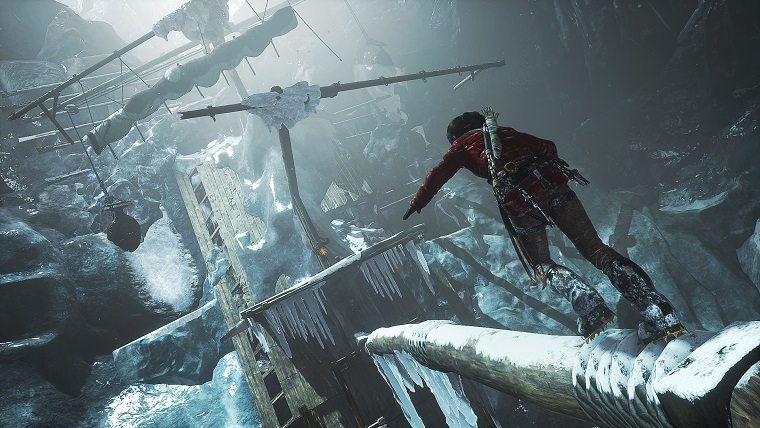 Rise of the Tomb Raider’s plot is a notable step up from the first game, as the stakes are higher and the characters themselves are more intriguing. Lara’s story here is more personal as she desperately wants to honor her father and prove that his research wasn’t meaningless, and the constant struggles she goes through on her journey are intense. However, the bad guys this time around aren’t just cookie-cutter villains, as they are fleshed out to the point where you can actually understand where they’re coming from. There’s an emotional story that is being told here, and the game is paced well enough that it keeps you engaged right to the thrilling conclusion.

The gameplay is able to hold up its end of the bargain, as well, further refining what was offered in the first game and mastering it. While this series regularly draws comparisons to Uncharted, Tomb Raider sets itself apart by putting a far greater emphasis on wilderness survival. Lara has to constantly scrounge around for supplies to craft ammo for her weapons or even upgrade them, while also hunting and fending off wild animals. It’s a system that really works well as it forces you to search every area thoroughly as a means of being prepared for the future challenges. The new snowy mountain setting featured here only enhances this gameplay, with jaw-dropping visuals and brutal weather that serves as an antagonist all on its own.

There are once again a variety of environmental puzzles that Lara has to solve in order to inch her way closer to her goal, which are all well designed and don’t bog down the game’s more action-oriented focus. She’ll be jumping, swinging and racing her way through crumbling structures while simultaneously facing off against the hoards of Trinity lackeys, and the sheer action spectacle that is on display here is mind-blowing. The game never lets up with its set pieces, somehow maintaining the game’s freight train pace for its entirety. 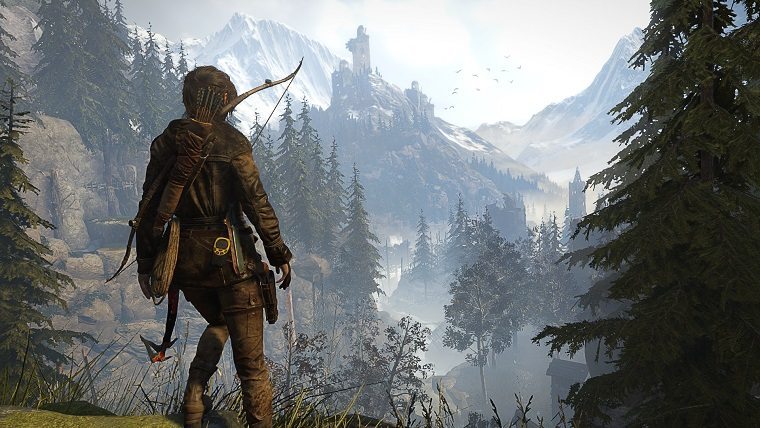 The game’s core mechanics simply work perfectly here. You can go in guns blazing to take out all of the enemies in the area in immensely gratifying shootouts, or you can take the stealth approach and patiently take everyone down for a greater sense of accomplishment. While Lara has a solid arsenal of weapons ranging from pistols, shotguns, assault rifles and bows, it’s how she can use her environment that truly makes the gameplay shine. Sneaking around an enemy base and finding an empty bottle allows you to create a Molotov cocktail on the fly, setting a group of unsuspecting enemies ablaze with the right touch. Likewise, using the environment to her advantage to grab enemies from the shadows of pick them off from a high tree gives assures that you always have multiple ways of dealing with enemies.

Despite the game featuring a straightforward narrative, Crystal Dynamics has indeed addressed the complaints with the first game not having enough tombs to raid. The increased amount of tombs are certainly welcome, but they went much further than that in offering players more things to do outside of the main story. The game’s indigenous people that Lara ends up working with on her mission all have plenty of questing that needs to be done, and the game is generally packed with hidden secrets waiting to be discovered at every turn.

The player progression that feeds from both the main story and side content is also addictive, as there are three skill trees to be upgraded and all of the game’s various weapons have their own upgrade paths, as well. Skill points will be accumulated as you complete missions, take out enemies and discover artifacts, which naturally allow you to make Lara a more powerful fighter with an ever-growing skill set. 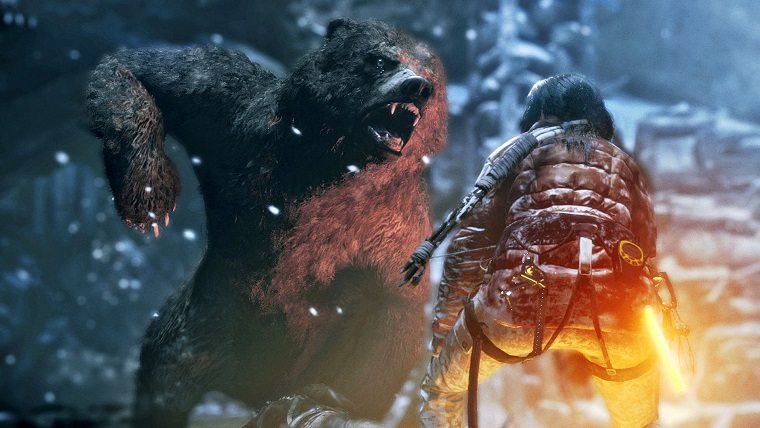 While the main game has plenty to offer, the game’s Expedition mode offers even more to get lost in. This is even more true with this 20 Year Celebration edition, as right out of the box you’ll be able to check out Score Attack, Chapter Replay, Chapter Replay Elite, Remnant Resistance, Endurance (solo and co-op), Cold Darkness and the brand new Lara’s Nightmare. Each offer an arcade-like twist to the game’s typical gameplay, whether you’re replaying missions to get a high score, dealing with dwindling hunger and warmth meters in Endurance, destroying bases in a “Keep Talking and Nobody Explodes”-like manner in Cold Darkness, or even taking down the living dead in Lara’s Nightmare. These modes range from good to great, and provide many reasons to keep playing the game well after the credits roll.

And these modes don’t even cover the story DLC. Baba Yaga is worked right into the main storyline’s world, which has Lara hunting down a witch from Russian folklore. It’s a trippy chunk of gameplay that’s a nice change of pace from the rest of the game, concluding in a great boss battle. However, the true standout is the brand new Blood Ties story, which has Lara exploring Croft Manor for proof that she is the rightful heir to stop the Manor from being taken away. There’s no combat at all as the focus is entirely on exploration and the Croft family lore, and it’s all the better for it.

Rise of the Tomb Raider: 20 Year Celebration is a fantastic package that any Tomb Raider fan will adore. The main story is possibly the best that the entire series has offered yet, and the sheer amount of additional and worthwhile content both inside the main game and outside of it with Expeditions is staggering. The series’ future may have been in question a few years ago, but it now finds itself standing firmly with the best that the action-adventure genre has to offer.