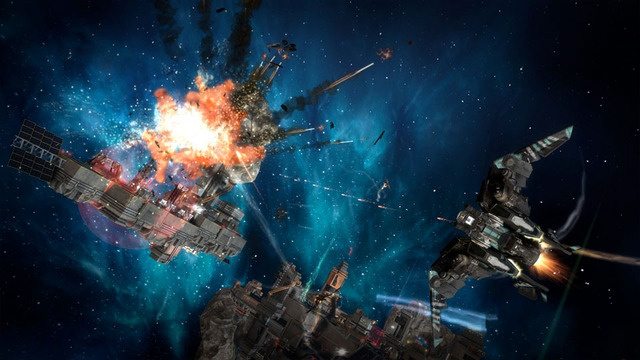 Welcome to a new era of multiplayer experiences, Starhawk has arrived exclusively for the PlayStation 3.  Unlike any shooter that’s come before it, LightBox Interactive and Sony Santa Monica have cooked up an improbable formula that’s a distinctly refreshing contrast to the me-too experiences that have been left in Call of Duty’s wake in recent years. Developed on a “Build & Battle” gameplay methodology, Starhawk asks players to not only shoot the other guy, but to use real time strategy and tower defense rules in the process.

The universe of Starhawk is set in the distant future, one where factions do battle over a rare substance called Rift Energy.  The desire of everyone in the galaxy, Rifters work to mine the substance to make an honest living, while The Outcast have other plans.  They’re  a group of mutated creatures that at one time were human,  but have become mutated and psychotic after an overexposure to the glowing substance.  Somewhere in-between these two factions is Emmett Graves.  Graves is a hired gun, who shares traits with both factions, some mutations of his own Graves hasn’t quite hit the tipping point that the Outcast have.  When the leader of the Outcast warriors makes his way back to Graves’ home settlement of White Plains, the humans will need his help to push back the creature threat once and for all.

Starhawk’s campaign is more or less an eight hour tutorial on how to play the game’s multiplayer component.

This overarching battle for Rift Energy plays a central role in Starhawk’s gameplay.  The story behind the Rift Energy however, is more of an afterthought in a campaign that serves as more or less an eight hour tutorial on how to play the game’s multiplayer component.  Starhawk’s single player portion will teach you the finer points of “Build & Battle”, starting small and working your way up to the  most powerful weaponry available.  The premise though is truly simple: Harvest Rift energy.  If you have enough you can build anything you want.  That ranges through a wide variety of orbital drops to be called in to aid you in battle.  Starhawk’s single player will ask you to perform a number of tasks.  From base defense to dog fighting and tank driving, you’ll learn the ins-and outs of all these weapons in due time.  There’s two ways that Starhawk’s single player campaign can be looked at.  For a third person action game it definitely lacks in the story telling department compared to its competition.  As a strategy title however, it definitely holds it own.  Driven on the standard Sony storyboards of late, the majority of Starhawk’s story is told through cartoon-like animated sequences.

Eventhough its easily the game’s weakest component, the single player should be mandatory for new Starhawk players looking to get the most out of multiplayer. Because this is where Starhawk absolutely shines.  32 man battles where everyone can build defenses on whim, the action is chaotic and fast.  Flying, driving, and infantry play are all fair game in Starhawk, and you won’t have to look far to find a fight in some form.  The sprawling battlefields will have you cutting through enemy defenses to retake zones, capture flags, or just going for kills in the standard deathmatch and team deathmatch modes.

Overtaking an enemy plot of land in Starhawk is a beautiful thing to participate in.  Using teamwork to disable shields, turrets, and other defenses while vehicle units move into mop up the stragglers or take on your enemy’s heavy equipment  is as intense as it gets in multiplayer offerings on any platform.  Similarly, hunkering down to push back an enemy onslaught while calling orbital drops to aid in your defense is just as gratifying.  No matter what you’re controlling, be it the Hawk Mech/Plane combo, the Ox Tank, Razorback Truck, Sidewinder, or just your character on foot, Starhawk is silky smooth from a control standpoint as well.  The truly amazing thing is just how much is going on in any given battle.

Starhawk is as intense as it gets in multiplayer offerings on any platform.

On top of it all Starhawk doesn’t skimp when it comes to options.  As you would expect from a game focused on multiplayer, there are alot of unlockables to achieve through the games XP system.  Paint jobs, clothes, and other things are a nice touch, but don’t have much effect on the field of the play, which is probably a good thing.  The ability to form or join a clan is also stock in Starhawk, and with so much emphasis placed on teamwork, it’d probably be beneficial to join one, though its not mandatory.  You can jump into any number of quickmatch affairs through the game’s matchmaking system, or through a lobby browser if you’re looking for more specific game parameters.

You’re not likely going to find a multiplayer experience that is as rich and unique as Starhawk anytime soon.  LightBox took a big risk in forming its own mold for this game, and it works surprisingly well.  From concept to execution there’s not much to find fault with, because frankly its unlike any other game.   Usually when games attempt to combine genres like Starhawk has, something is usually lacking, but here that’s simply just not the case.  It marries the addictive elements of tower defense and fast paced action of third person shooters exceptionally.  You could fault the campaign for lacking a little, but only because it pales in comparison to the fun to be had when you finally take Starhawk online.