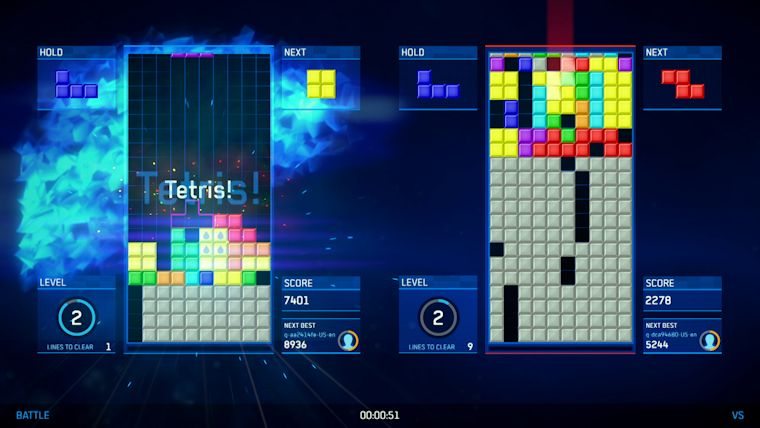 Serving as probably the most popular entertainment product to come from the Soviet Union, Tetris took the rest of the world by storm back in the 1980s. Initially debuting on PC and then coming to systems like Commodore 64 and NES, Tetris became the phenomenon that it is today thanks to the handheld version that released for Game Boy. Offering some of the simplest puzzle gameplay of all, the game has continued to live on through the years by taking many different forms. To celebrate the 30th anniversary of the creation of the gaming juggernaut, Ubisoft has teamed up with The Tetris Company to revive the series once again with Tetris Ultimate, a game that provides gameplay typical of the franchise while disappointingly not breaking many new boundaries.

Serving as basically the father of the puzzle game genre, Tetris has almost always followed the same simple gameplay. Seven differently shaped blocks fall from the top of the screen while the player moves and turns the pieces to clear lines. Tetris Ultimate is absolutely no different in these regards, with the main Marathon mode being just that. This can be good in some aspects, as it provides players a very simple and familiar game mode to play. The very annoying aspect is that Marathon mode is paired up with a locked mode known as Endless, but to unlock this mode, one has to play Endless to Level 15, which is quite a feat for most players. When the game only has six modes total, it is a terrible idea to make one of them almost impossible to unlock without a lot of luck.

In its most basic form, Marathon Mode can feel quite redundant, as there is very little to differentiate it from the Tetris of old.  However, Ubisoft has implemented a multiplayer element known as Tetris Live that can be played against not only the AI based Tetribots, but also other players online. While a little glitchy at times, this definitely helps to mix up the same Tetris that has been around forever by squaring off against other players. The Tetribots range from four difficulty levels: Apprentice, Intermediate, Advanced, and Master. The skill of each Tetribot differs greatly, with the Advanced and Master Tetribots truly offering a challenge for even the best of Tetris players.

Though easy to overlook, Marathon mode does also offer both Team Versus and Co-Op game styles, which can add a lot of fun to the game. Playing with friends in Co-Op is easily one of the best aspects of Tetris Ultimate, as there are up to 34 connected columns, with each of the four players having access to either six or eight columns. On top of that, each player has the ability to overlap through the two spaces between the other players. Working to clear a full row of 34 blocks takes a lot of work, which makes this one all the more fun, especially with live players.

Rather than working together, the game also allows one to square off against others in every one of the game modes. Sprint and Ultra are very similar, with Sprint being a race to clear 40 lines first while Ultra has you playing for three minutes to see who can get the most lines. However, the biggest disappointment here is that these two are not customizable in the least, with both being locked down to the respective 40 lines and three minutes. This is something very simple that they should have offered in the game to add a little bit on longevity to the one mode that typically won’t result in a game over.

The competitive multiplayer element is best exemplified in two of the other game modes found in the game, Battle Mode and Battle Ultimate Mode. Offering nothing overly groundbreaking, Battle Mode pits one against up to three other players in fairly intense matchups. This can get pretty boring after awhile and is not all that much fun to play. Luckily, Battle Ultimate Mode shakes it up quite a bit, by adding in five separate power-ups that can be used against opponents. One of the most unique causes the opponent’s blocks to shift to the left for every Tetrimino that falls, making the game much more difficult overall. 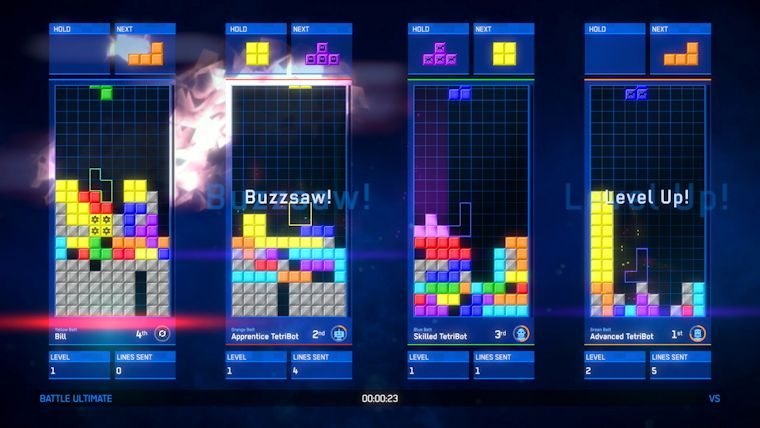 Tetris Live can be technically used on any game modes, but both of the Battle Modes are where it feels most at home, especially with the ability to face off against not only the basic AI, online opponents, and friends both local and online, but also friends’ “Tetris Self”. This is similar to the Drivatar technology found in the two most recent Forza games, though nowhere near as advanced. This is certainly something that is nice to have, but in a game like Tetris, it is hard to tell how accurate the AI really is with Tetris Self.

Tetris Ultimate is a nostalgic trip down memory lane that feels too stale in the long run. The classic Tetris gameplay elements are here, but with so many releases over the years in this franchise, Ubisoft really could have tried to break new ground in more ways. The simplicity and accessibility of Tetris Live is much appreciated, including the ability to play against the Tetris Self of friends, while Co-Op is also a lot of fun to use. At only $9.99, one certainly wouldn’t be making a mistake buying Tetris Ultimate with more game modes said to be on the way, though if one is looking for a very different type of Tetris experience, it would probably be best to look elsewhere.