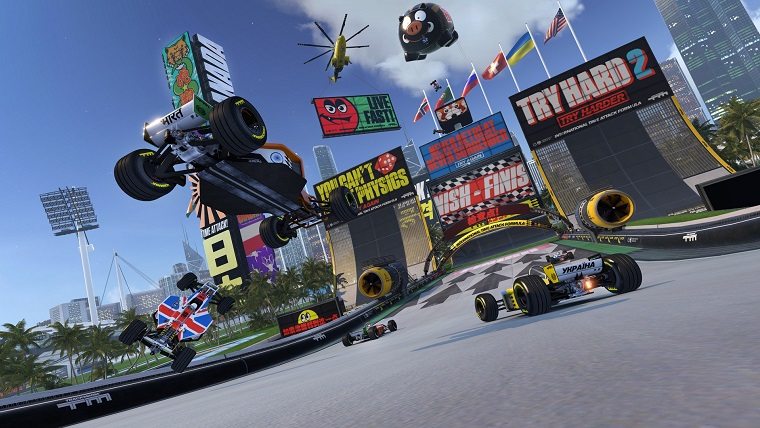 In a world where racing games tend to lean more and more towards a 1:1 simulation of cars in real life, it’s nice to have a game come along every now and then that throws a wrench in the formula. As great as the Forza and Gran Turismo series are, sometimes you just want a racer that’s less about realism and more about high-octane thrills in a more simplified, arcade experience. Thankfully, TrackMania Turbo has come at just the right time, offering an incredible sense of speed through 200 levels filled with all matter of jumps, loops, super-sharp turns and more that all put the focus squarely on going as fast as you can while avoiding a terrible collision.

You know that you’re in for one hell of a ride right off the bat when your very first course (and many others) has you dropping from a helicopter several hundred feet in the air onto a vert ramp to start the race. Things don’t let up after that, either, as the formula that TrackMania Turbo lives by is sheer over-the-top insanity. While the game is simple to understand with its basic controls of steer, accelerate, brake and restart, it’s mastering them with each of the handful of vehicles throughout the 4 locations that host the aforementioned 200 levels that is the true challenge. The game is incredibly challenging and will have you restarting multiple times per level due to precision being the key to overcoming them, but it always feels like it’s your fault and not the game being cheap or unfair.

The meat of the game is found within the campaign mode, as the game slowly eases you into how the game works with easier levels before ramping up the difficulty. It’s all about getting the best possible time you can on each course, as you will be rewarded with a bronze, silver or gold medal depending on how well you do. These go towards unlocking more levels and even aesthetic customizations for your car, so there’s a true sense of wanting to master each course in order to experience everything the game has to offer. The vast majority of the courses can be completed in under a minute, which is perfect considering the game’s pick-up-and-play nature and how much you’ll be restarting to perfect them. The game’s music is even tied to how well or poorly you perform, increasing and decreasing in intensity throughout the course of each race. 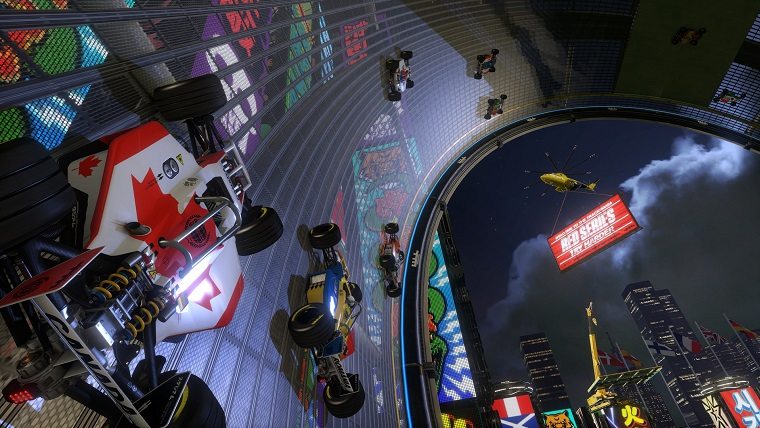 While TrackMania Turbo may not be on the same graphical level as some of the straight-up racing simulations out there, it is nevertheless a joy on the eyes with vibrant colors and fantastic level design. Just witnessing some of the madness unfold as you progress through many of the courses is a pleasure, as you’ll see a massive jump coming up on the horizon or a super-sharp turn that has you clenching your teeth in anticipation. Things start off pretty simply with with the desert locale of Canyon Grand Drift to get the hang of things, but after that you’ll be going through the wooded Down & Dirty Valley, the incredibly-twisted loops of Rollercoaster Lagoon and the jaw-dropping metro city locale of the International Stadium.

They aren’t present nearly as much as the shorter courses, but there are longer 3-lap courses that, honestly, don’t work as well. Where the game is so focused on quick bursts of speed through levels filled with challenges that can force you to have to start over, a longer course ends up losing the thrills pretty quickly. While restarting over and over in a course you know is only around 30-40 seconds long is perfectly fine, when you make a mistake on the third lap of a longer course it makes starting over much more daunting of a task. Thankfully, restarting is instantaneous and allows you to get right back in on the action with a press of a button.

If you ever get tired of all of the courses that the game offers you then you are free to check out the game’s Track Builder, which allows you to make tracks as simple or complex as you want them to be. There are also different versions of the Track Builder for you to choose from, allowing beginners to get a feel for how to create a basic course before moving on to the much more intricately-designed ones. These tracks can also be shared online where you can try out other people’s creations, which will definitely go towards giving this game lasting value. 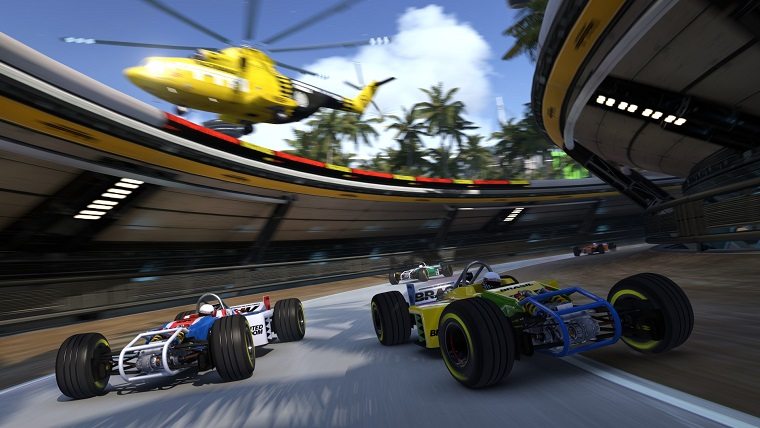 Of course, taking on live opponents is where the true fun begins, and TrackMania Turbo features both local and online multiplayer options. Getting into online matches is a snap, which hold up to 100 people around the world with little to no lag in my time of testing it and no disconnections whatsoever. The focus is mainly on getting the best time, with the game giving you a set amount of time to have multiple runs through a particular course and keeping your best time for the end to see who got through it the fastest. Even though there can be up to 99 other people racing with you, they are presented as ghosts and they cannot interfere with your driving in anyway. The courses also have multiple checkpoints that record your time leading up to them, so you can restart at the point giving you the most trouble rather than back at the beginning every time.

The game is no slouch in the local multiplayer department, either, with plenty of content to keep you occupied. You can play through all of the 200 courses offered in the campaign, as well as tracks that you’ve created in the Track Builder and even randomly generated ones. The random track generator is fantastic and something I can see giving this game even more replay value, as you witness the tracks created before your very eyes and can then decide if you want to race in it or not. There’s even a Double Driver mode that has you and one other player controlling the same car, which is ridiculously fun to try and actually pull off to make it through a course with a respectable time. I can’t see this being a mode that people will jump to all the time, but it’s great for the novelty of it alone.

If you find yourself getting tired of the more realistic racers out there, TrackMania Turbo could be just the remedy you’re looking for. Trading in realism for thrills, the game is able to firmly stand on its own within the crowded racing genre thanks to its fantastic arcade mechanics and sheer fun factor. There’s tons of content to get through in the campaign, and that amount is multiplied exponentially once you take on others online and start creating your own courses. It’s getting harder and harder for racing games to really come with a wow factor, but TrackMania Turbo has it in spades.