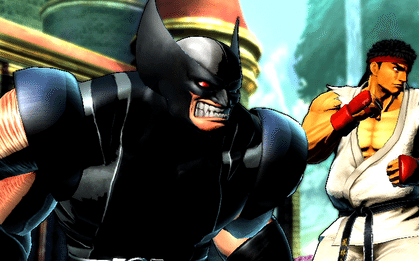 In 2011, Capcom released multiple iterations of their popular long running fighting franchise, Marvel vs Capcom.  The third entry in the series brought about the traditional Capcom treatment of a standard version, and then later in the year an “Ultimate” edition.  Now here in 2012, the release of the PlayStation Vita brings about another version of the popular fighter: Ultimate Marvel Vs Capcom 3 for the Vita.  What’s most surprising about the latest release from Capcom is their ability to deliver the complete Marvel Vs Capcom experience on the handheld, for what all intents and purposes is a direct 1:1 translation of the fighter.

The core gameplay of the Marvel Vs Capcom 3 experience on the Xbox 360 and PlayStation 3 are present here.  The gameplay remains the same fast pased, well balanced affair that fans of the franchise are accustomed to.  The real rewards of the Vita version boil down to the ability to utilize all of the online functionality of a console, in the palm of your hand on the Vita.  That being said, Ultimate Marvel Vs Capcom 3 is a perfect example of what core gamers are expecting out of a PlayStation Vita port.  Being able to participate in every online aspect of Ultimate Marvel Vs Capcom 3 that you’ll find on consoles is the ultimate +.

There are other perks that come alongside the PS Vita version of Ultimate Marvel Vs Capcom 3.   Vita players can use their handheld as “The Ultimate Controller” for their PlayStation 3 version of the game.  By connecting the Vita to the PS3 wirelessly, players can enhance their console experience with the addition of the functionality of using the Vita to control the onscreen action.  Is it gimmicky?  Yes, for the “core” fighting fan that has sunk the time into master the moves in the game, they may find that this new addition is one they’ll make little use of.  Is it cool?  Definitely.

Alot of these features that comingle with the PlayStation 3 show alot of promise for what developers could decide to do with the PS Vita.  While it’s glaringly obvious that there is little quality lost in the translation between the PS3 version of the game and the Vita, they do also incorporate touchscreen controls into the fighting that definitely seperate the game from its predecessors.  Touch Mode in Ultimate Marvel Vs Capcom 3 is pretty intuitive, but for hardcore fighter fans, again they can feel somewhat oversimplified.  Simple taps can lead to 50 hit juggle combos, and many lobbies you’ll find online bar the touch screen controls from being used at all, because of this. This oversimplification leaves alot of the bullet points of Vita specific features feeling more like gimmicks than features that enhance the experience, but are cool to try out, and as I said, show a ton of potential.

That said, after playing a bunch of Ultimate Marvel Vs Capcom 3, now on the PlayStation Vita, I stand by alot of the likes and dislikes of our original reviews  of the title (MVC3 & UMVC3).  Well, outside of the whole “glorified DLC thing that was complained about” when Ultimate originally launched late last year.  Ultimate Marvel Vs Capcom 3 on the Vita will blow your mind.  Maybe not for what you’ve seen before on previous console offerings of the title, but by just how well the Vita handles it all.