The Xbox One Backwards Compatibility list grows by six games today with Microsoft unleashing a new set of Xbox 360...

Saints Row 4 to release in August

Deep Silver and Volition will release Saints Row IV on August 20th in North America and August 23rd in the...

The Future of Saints Row in a post-THQ world

Volition has been responsible for the Saints Row franchise since its inception, and today, the studio was sold to the...

Saints Row: The Third launched earlier this week, and PlayStation owners were feeling a little betrayed when there was no sign of any exclusive content that they were promised with the game. While THQ hasn't offered any statement on the lack of this exclusive mode that was touted at E3 back in 2010, they did make good on giving PS3 gamers a little some extra.

If you can remember all the way back to E3 2010, you'll remember that THQ had promised PS3 owners a little something extra when they purchased Saints Row: The Third. The exclusive mode, which was never detailed in full, was apparently scrapped by THQ and Volition. 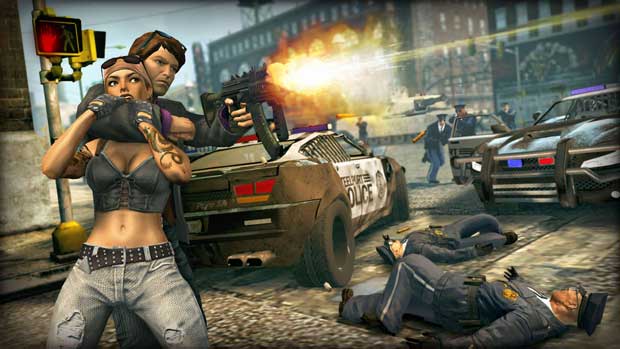 The Saints Row franchise spawned to life to fill somewhat of a demand for sandbox games that Rockstar created with the Grand Theft Auto series.  While the original Saints Row saw some criticisms thrown its way for emulating Rockstar's maginificent open-world formula, it's sequel, Saints Row 2 began to forge its own path.

Saints Row: The Third will Feature a Season Pass

Saints Row: The Third doesn't release until next week, and rest assured THQ has plans for DLC in the future. They think you're gonna want to play it, and to make sure you get all of it, they're offering it up season pass style.

Need more proof that Saints Row: The Third has a inside shot at being the strangest game you'll play in 2011? Well look no further.

The go anywhere do anything action of Saints Row: The Third is on display in the latest gameplay to surface for the upcoming sandbox game. The footage doesn't appears to be straight gameplay from the game, so it gives a good representation about what to expect come mid-November.

THQ has launched the Saints Row: The Third Initiation Station demo where you can customize your character and upload it to the Saints Row community servers.

Sure, EA's Origin content delivery system may have seemed a little light at re-launch, but today, the publisher revealed that some of the industry's biggest are joining the network. Soon you'll be able to get content on Origin from publishers like Capcom, Warner Brothers, and THQ which will definitely increase the value of having an Origin account if you only picked one up for Battlefield 3.

In the most recent trailer for Saints Row: The Third, THQ introduces us to The Deckers.  They are the elite...

1 2 Next »
That's all we have for Saints Row: The Third. Check out some of our latest content on Attack of the Fanboy.

Pokemon The Crown Tundra – Which Is The Real Articuno?

Pick the right one.

Pokemon The Crown Tundra – Where To Find Galarian Articuno

The toughest of the trio to find and acquire.

Pokemon The Crown Tundra – How To Unlock The Galarian Star Tournament