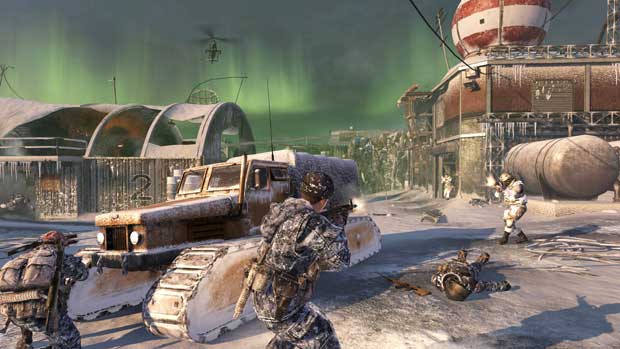 Call of Duty Black Ops First Strike has just launched on the PS3. The downloadable map pack includes four new multiplayer maps and a new zombie map.  The screenshots and video below will give you a good idea of what to expect in First Strike.

The four new multiplayer maps: Stadium, Kowloon, Discovery, and Berlin Wall all have distinct and unique features.  You can read our review of the DLC, which we reviewed last month when it launched on Xbox 360.  The video below is also from the Xbox 360 version, but after playing through the maps on both consoles, you’d be hard pressed to find a difference on either console.

Aside from the four new multiplayer maps, First Strike comes with a new zombies map: Ascension.  Here you fend off the zombie horde with a slew of new weapons and interactions on the map.  But watch out, the Space Monkeys are coming!

While the maps are well worth the fifteen dollars, we are giving away codes for the map pack.  You’ll need to follow us on Twitter and retweet the following message. Follow us here

#BlackOps #FirstStrike DLC is now available for #PS3. Follow @FanboyAttack for your chance to win a copy. http://bit.ly/hSz96L