Choosing a side in Star Wars: The Old Republic 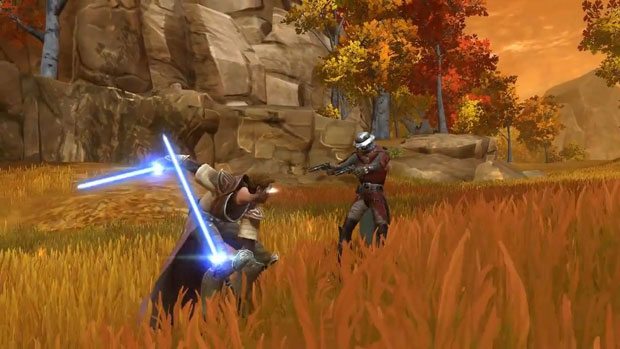 Rolling a character and choosing a faction can be a big decision in any MMO.  This will be no different in Star Wars: The Old Republic, as you’ll have a wealth of options to choose from.  In Star Wars: The Old Republic the Galactic Republic and the Sith Empire do battle, and starting out you’ll need to pick a side.  Inside each faction there are eight different classes to choose from, which all have their own strengths and weaknesses.

While you might not get a chance to see these classes in action for a couple months, (unless you sign up to beta test) EA has put together a set of videos that show some of the classes doing battle against one another.  The first video that was just released shows a Jedi Knight against a Bounty Hunter.

In the Jedi Knight v Bounty Hunter matchup, you’ll see that close ranged attacks and force powers are the Jedi’s strong traits.  As opposed to the Bounty Hunter who uses a wide assortment of gadgetry and ranged weapons to their advantage.  Who comes out on top?  You’ll need to watch the video below to find out, and start thinking about which type of character you’ll chose in Star Wars: The Old Republic.

SWTOR is set for a limited release this December.

Home / Videos / Choosing a side in Star Wars: The Old Republic