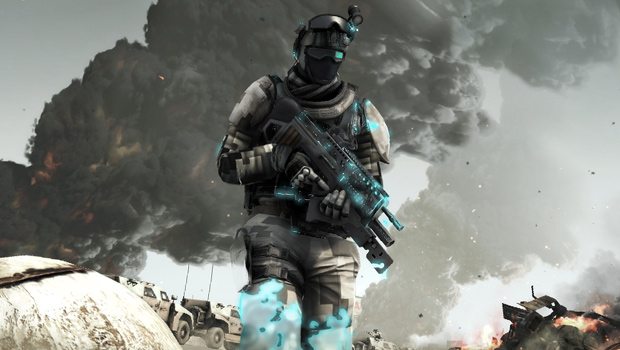 If there was ever any doubt that the Ghost Recon franchise had been losing steam over the years, prepare to think again after you watch the premiere gameplay trailer for Ghost Recon: Future Soldier.

As if it weren’t clear enough following the game’s big reveal at last year’s E3, this game will be the real deal as far as military shooters in today’s day and age go. The trailer showcases some phenomenal cinematic sequences as well as some in-game footage that will surely not disappoint. In traditional Tom Clancy fashion, the element of stealth is clearly still ever-present, so for those of you worried that the franchise was on the verge of turning to a more run-and-gun style you need not fear. The trailer highlights some slick futuristic weaponry, tech, and gadgets that will assist you in taking out entire convoys without a single peep. I think we all knew it was only a matter of time before the military got its hands on camouflage technology capable of making soldiers virtually invisible, but I doubt you’d be able to get your hands on it for more recreational purposes. Like, you know, snaking into the girls bathroom and such.

The “in the near future” storyline will take place in Norway, the Middle East, and Asia following a Russian invasion. You will take control of “The Ghosts”, a 4-man squad dedicated to the most deadly missions behind enemy lines. Each squad member has their respective strengths – a commando, sniper, reconnaissance expert, and engineer. The game will once again take the form of a third-person shooter with FPS elements, particularly when aiming down the sights or firing from cover.

Ghost Recon: Future Soldier is set for release this May 22. If you’re a shooter fan or someone who has always fantasized about the possibilities of being temporarily invisible, this is a title you’re not going to want to miss. Check out the new trailer below: