The latest news in the world of video games at Attack of the Fanboy
April 9th, 2017 by Dean James 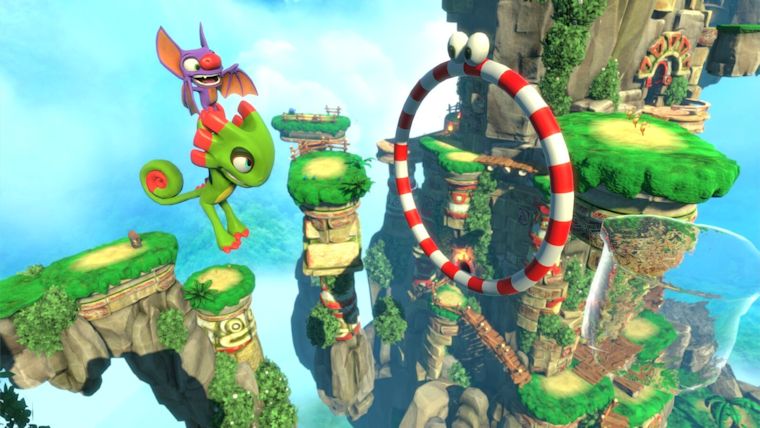 Update: Playtonic Games has told Game Informer that the Xbox Wire report was incorrect and sadly Yooka-Laylee will not be coming to Xbox Play Anywhere after all.

The much talked about Yooka-Laylee finally releases this week after the review embargo went up last week. Playtonic Games already revealed that they were releasing a day one patch for the game, but now some new information has come out about the game that makes those buying the Xbox One or Windows 10 versions even better.

Yooka-Laylee is a very worthwhile trip back to the Nintendo 64 era from the team that used to be at Rare and brought us classics like Banjo-Kazooie. The game is releasing this week on Xbox One, PlayStation 4, and PC, with a version coming out for Nintendo Switch at a later time. However, there is definitely one console version that you’ll be getting more bang for your buck with.

As revealed by the This Week in Xbox feature on Xbox Wire, Yooka-Laylee will be supporting the Xbox One and Windows 10 Xbox Play Anywhere Program when it launches on Tuesday.

This program was announced at E3 last year and is great for those that own an Xbox One and a Windows 10 PC capable of playing games. By purchasing Yooka-Laylee on either Xbox One or Windows 10 PC, you will then be able to also download the game through that same account on the other as well.

For those that are worried, Yooka-Laylee is not exclusive to Windows 10, as it will also be available to download elsewhere on PC through Steam and such. However, if you want to be able to play the game across the two, there is no reason not to get it this way.

While Yooka-Laylee isn’t out yet, you can check out our review for the game that went up this past week where we quite enjoyed the game. It definitely has some flaws, but thankfully Playtonic is already working on the day one patch to fix a lot of these issues.