The latest news in the world of video games at Attack of the Fanboy
August 15th, 2017 by Al McCarthy 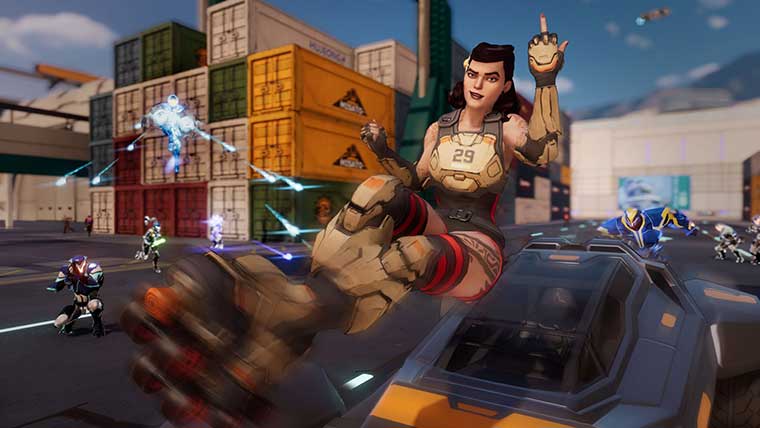 Volition has been bringing us Saints Row titles for over a decade.  What started as something that was essentially a Grand Theft Auto clone, transitioned into something really special that stood on its own as the developers started incorporating an over-the-top story that took a low level street gang all the way to the White House.  All the while, expanding on gameplay elements that felt unique to the series as it continued to evolve.  You may think that Volition closed the door on Saints Row as they’ve transitioned over to Agents of Mayhem.  While this game is certainly not a Saints Row game it feels like an evolution of it… and it does take place in the same universe…kinda.  It’s actually a spin-off of one of the endings in the Gat out of Hell expansion where the fan-favorite character, Johnny Gat, asks God to recreate the Earth.

// 3. This function creates an

// 4. The API will call this function when the video player is ready. function onPlayerReady(event) { event.target.mute(); }

In this new world, the Agents of Mayhem are fighting an organization of supervillains called L.E.G.I.O.N.  (The League of Evil Gentlemen Intent on Obliterating Nations).  The gameplay is a continuation of what we saw in the Saints Row franchise — open world, third person action.  The big difference between Agents of Mayhem and Saints Row though is that instead of creating a character and playing that character for the entirety of the game, Volition has developed a group of super heroes known as M.A.Y.H.E.M.  (Multinational Agency Hunting Evil Masterminds).  This group consists of a number of unique, colorful characters all with different playstyles, weapons, and ways to upgrade them.  In tone, Volition hasn’t changed at all with Agents of Mayhem.  If you’ve loved the outlandishness fun and humor of the Saints Row series, you’ll love Agents of Mayhem for the same reasons.

The characters that comprise M.A.Y.H.E.M.  are interesting enough in their own right.  Each have their own backstory, side-missions, and gameplay nuances.    You’ve got Braddock, a former USMC Drill Instructor that has a chip on her shoulder from having soldiers she’d trained turned into L.E.G.I.O.N.  Daisy is a stocky roller derby contestant with a penchant for drinking and toting her Heavy Mini-Gun.  Fortune is one of the three agents that you start out as.  This Columbian sky pirate dual-wields pistols, uses acrobatic movements, and is never without her faithful drone companion.  Hardtack is ex-Navy heavy class that gets up close and personal with a shotgun, who’ll sometimes break out a harpoon when the situation calls for it.  Hollywood is an ex-reality star with narcissitc tendencies.  The list goes on with characters like tech-savvy fashionista, Pierce Washington from the Saints Row games, Oni a Yakuza Hitman, a bow-toting immunilogist, and others. 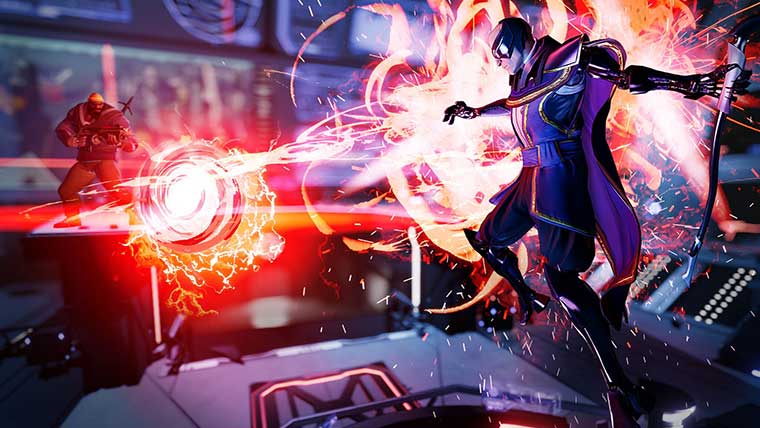 Volition has a definitive style to their games in terms of both the humor, writing and gameplay elements from their previous efforts.  A lot has been taken from the Saints Row series and incorporated into AOM.  It’s an open world game with all the collectibles, world events to tackle, and main story path missions that the Saints Row games had.  This time around though, the sheer number of playable characters and ways to use them together as fighting units are the most obvious tweaks to this formula.  The Agents of Mayhem roll as a team and whether on a mission or free roaming Seoul, you can swap between any of the three characters that you put into a unit.  Combat is third person shooting, but each character may have strengths and weakness that must be used in tandem to take down different types of enemies.  The roster of heroes in Agents of Mayhem feels almost like something you’d find in a MOBA.  Each character has a unique primary weapon, and then two special moves that they can also use to thin the ranks of L.E.G.I.O.N. forces.  With twelve unlockable agents (and more depending on if you pre-ordered from a certain retailer) there are plenty of combinations to try.  The game also lets you tackle any mission on a wide array of difficulty levels that scale bigger or smaller bonuses on completion.

This is definitely Agents of Mayhem’s biggest strength.  That and the daunting amount of collectibles and upgrades that you can find throughout the world to continue and strengthen M.A.Y.H.E.M. in their fight.  Open world enthusiasts will find no shortage of things to do in AOM.  From tackling main path story missions to side missions that add color to each of the heroes backstory, AOM does a great job in building this new world.  For those coming from Saints Row, there are quite a few throwbacks to that game.  References like the fast food restaurant Freckle Bitches and characters like Pierce and Gat being included in the game make it feel connected to that beloved series.  It’s quite unfortunate that they put one of Saints Row’s best characters in behind a pre-order scheme. 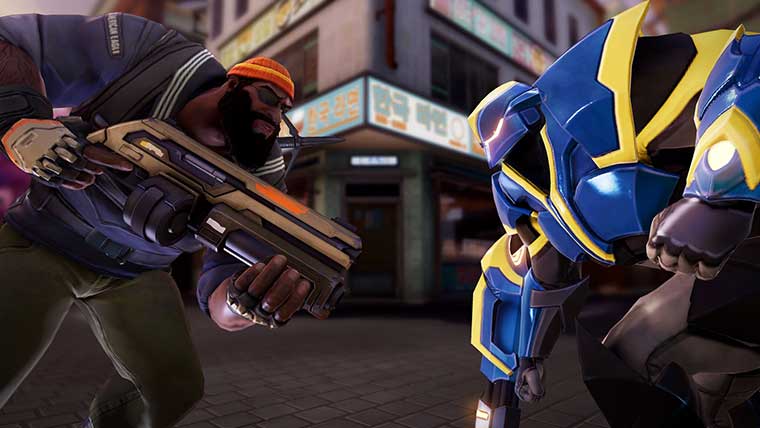 For those that like the management aspect of things, there’s plenty to do in AOM in that regard as well.   Your homebase, the Ark, has a number of things to do there when you’re not out on a mission.  You can keep track of all agency activities.  You can visit the Requisitions store and purchase upgrades for the agency.  These include bonuses that require that you be a certain level, but that effect all characters on your roster.  If you acquire trading companies out in the field, you can also collect money to spend that runs on a timer.  The Ark also has a vehicle  depot that you can build throughout the game.  Each different car gives you different bonuses, and skins to unlock.  The Armory is where a lot of your customization will take place.  Each character can be outfitted with different gadgets in three slots give different buffs and abilities.  Upgrades, Core Upgrades, and Legion Tech can also be added to each character separately.  Legion Tech is developed in the R&D department of the Ark.  You’ll need to find schematics and then use crafting materials to use these powerful upgrades.  The same goes for other power-ups known as Gremlin Tech.  There’s a crafting loop in the game to power-up your characters to tackle tougher and tougher challenges which includes sending them out into a passive mode called Global Conflict.  You don’t play this mode, rather send inactive agents to different areas of the world to ultimately uncover a secret lair, but it’s all done behing the scenes on a timer.

Agents of Mayhem certainly a respectable third person action game that’s a lot of fun to play.  The large roster of unique characters and multiple ways to customize and stengthen the agency definitely form a cohesive tone for the game in the fight against L.E.G.I.O.N.  This progression corresponds with a story that feels and looks like a Saturday morning cartoon for adults, at least in the cutscenes that tell it.  In-game, AOM is a definite step up from any of the Saints Row games in terms of visuals. 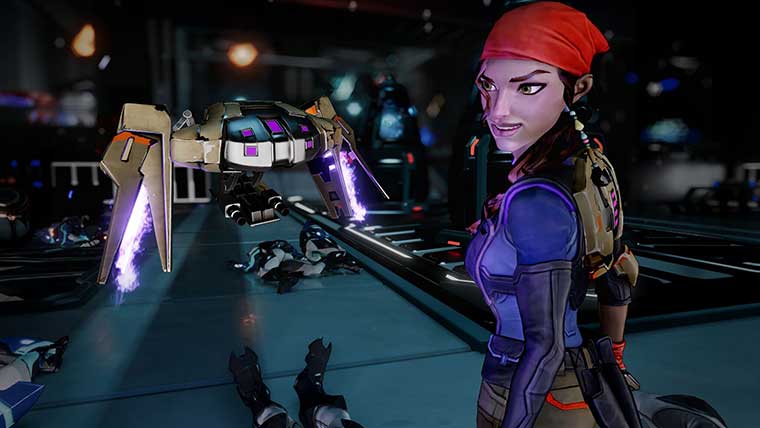 That said, like a lot of open world games, AOM can get a little bit repetitive at times.  It doesn’t quite have the silliness and sandbox nature of Saint’s Row. Where those games allowed you to cause incredible amounts of chaos often ending in ridiculous scenarios that had little to do with any mission or story element of the game, AOM feels a little less dynamic in this regard.  It feels more streamlined and mission based than its predecessors.  It also feels like a step backwards in some of the movement mechanics. Bringing players back to a place where driving is the primary method of getting from point A to point B feels a little rote.  You’ll spend quite a bit of time in vehicles in Agents of Mayhem.  It’s just not a fun mechanic when you go from the last game in the series where players had the ability to bound through the world and soar through the skies, back to driving cars.  That might be more of a nitpick for myself and less of a deal-breaker for others, if you didn’t mind the driving from the previous Saints Row games you won’t have any problem here.

What does feel like a bigger problem for Agents of Mayhem is the complete lack of online functionality in the game.  There’s no cooperative or competitive multiplayer in the game.  It feels like an odd decision on both fronts.   Even if they weren’t going to do some sort of traditional PvP mode, they could’ve taken some inspiration from something like Ubisoft’s Watch_Dogs 2 to incorporate something else for players to do to mix up the monotonous gameplay. A cooperative mode seems like it should’ve been included at the very least.  Some of the more challenging skill levels probably could’ve been incredibly fun to tackle with friends and given the solid gameplay it could’ve rivaled games like Destiny or Borderlands.

Agents of Mayhem feels like a game that doesn’t reach it’s true potential.  The high points are undoubtedly commendable.  The presentation, the characters, the gameplay — Agents of Mayhem feels like a great game in spots.  It’s got all the Saints Row style that you’re accustomed to seeing from Volition, but it lacks in features when compared to other open world games of this nature.