Go on the emotional journey to try and save your father all over again. 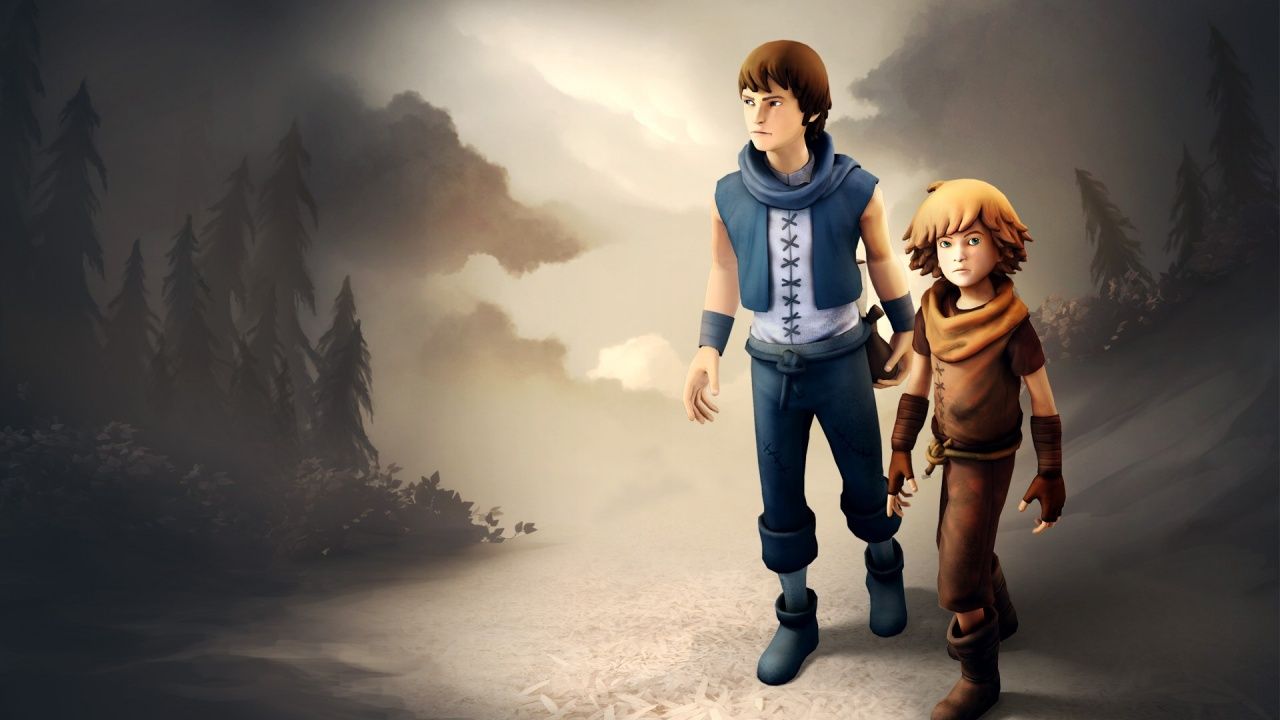 Josef Fares may be known more now for A Way Out or his The Game Awards outburst a couple years ago, but he got his start in game directing with 2013’s Brothers: A Tale of Two Sons on Xbox 360. The game was later re-released with extra content on current generations platforms and now the game has arrived on Nintendo Switch with one brand new feature.

Brothers: A Tale of Two Sons stars the titular brothers as they go on a journey to find special water from the Tree of Life to help their dying father. Rather than using actual dialogue or voice acting, the game uses a fake language made for the game. This means the animations for the characters really have to tell the story themselves, which they really do a good job at in the game. 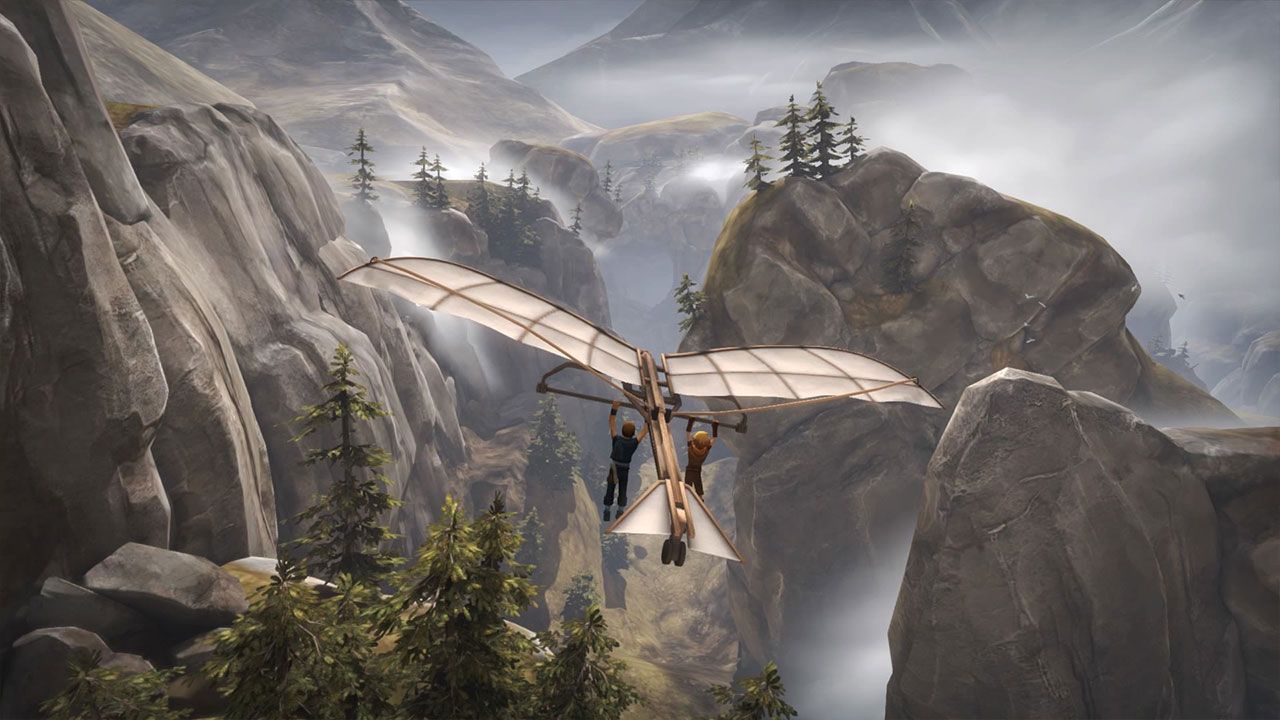 With the fantasy type setting, the game features fantastical and colorful visuals that would feel right at home in a series like The Legend of Zelda or Fable. Considering the visual style, there is not any sort of visual downgrade found on the Nintendo Switch version at all compared to past releases, along with performance that seemed to be on par with previous releases as well.

The gameplay found in Brothers: A Tale of Two Sons is based on controlling both of the brothers simultaneously with the use of one controller, or two in the case of the Nintendo Switch if you are playing with two Joy-Cons rather then a Pro Controller. The left half of the controller, or the left Joy-Con, is used to control the older brother while the right half of the controller, or the right Joy-Con, is used to control the younger brother. Moving the analog stick on that half moves that brother around and the respective trigger button interacts with different people and objects. The two bumper buttons are also used to move around the camera, though the solid camera included in the game rarely needs manual movement.

At the very start, the two brothers will have to work together to carry a homemade stretcher with their father on it, with each grabbing an end and moving it. This gives an easy introduction to the dual controls that you will have to get used to in Brothers: A Tale of Two Sons. From there, the game introduces a variety of different puzzle elements that you must use to advance across the game’s nine total chapters. The game is split into a prologue, seven numbered chapters, and then an epilogue after, though these are seamless if you are playing through the game in one go, which is the recommended way to play this game. If you know what you are doing and aren’t having trouble with the puzzles, you can complete Brothers: A Tale of Two Sons relatively quickly in about three hours. However, this length actually works for this type of game as it avoids overstaying its welcome with what is a relatively short journey overall.

Even though the game is short, that does not mean that it does not leave a lasting mark on you. This is done with the emotional beats that are found within the game both in the main story and little side characters you come across during the game. These are much more emotional than you may expect from a game with no actual dialogue, but they are conveyed incredibly well with the aforementioned character animations and the usage of the musical score, both of which are fully on display in both the Art Gallery and Sound Gallery available on the main menu. The game starts to tug at the heartstrings from the very beginning of the game where the little brother is at the grave of his mother that drowned in the past and extends all throughout the game, such as when you find a random side character trying to commit suicide by hanging that you can choose to help or not. Going into any more detail on these moments would really remove a lot of the experience from Brothers: A Tale of Two Sons, as it’s best to experience them firsthand instead.

On your way to the Tree of Life, you will come across a number of different puzzles to solve that include moving platforms, obtaining keys, and even some gameplay similar to that of Unravel 2 that came years before in its original release. Some of the best of these involve you saving a troll and helping it to reunite with its partner, with the troll helping you along the way to traverse areas that you couldn’t pass otherwise.

Completely new to the Nintendo Switch version is true co-op play, which was technically possible in the past if you really wanted. In previous releases, the only way you could play with two players was to share a single controller, with each person handling one half and one brother. However, this really did not work well and the game felt built for just the one player. The Nintendo Switch version actually lets you play with two players though, with each player having their own controller to use while controlling one of the brothers. This works much better than the previous method, though you can still easily enjoy the game and probably get the full effect of the impact when playing as just one player. One of the coolest features added in the current generation ports of Brothers: A Tale of Two Sons was that of director commentary over the game and it returns here as well. Rather than it playing over your playthrough of the game though, it instead is included in the main menu as a video that you can watch as a pre-done video of the game itself is played instead. This was probably for the best overall, as it would have been a little difficult to time the commentary over the random playthroughs of each player instead.

Nearly six years after its initial release on Xbox 360 and Brothers: A Tale of Two Sons is still a powerful emotional journey well worth taking. While the game is still quite short, the adventure within those three hours is still full of enjoyable puzzles and has an ending that will really stick with you long after you are done playing.

In addition to the touching story of two brothers trying to save their father that has been present in all previous releases, Brothers: A Tale of Two Sons for Nintendo Switch finally gains the co-op gameplay option the game always felt like it was lacking. If you have missed out on Brothers: A Tale of Two Sons in the past, there is absolutely no reason not to check out the latest release on Nintendo Switch in its definitive form.