Some of the criticisms towards Dragon Ball Super right now is that the series just recycles too much content from the animated movies we have seen before. Episode 22 however does the exact opposite and tells a different story from the movies. It also adds characters that weren’t in the movie to the fray.

The characters being added include Goten, Trunks and even Captain Ginyu. All of them have a role in this episode that makes it a little more interesting than in the movie. It’s nice to see the two boys join the fight as many fans were disappointed when they didn’t appear in the movie.

Let’s go back a bit and explain what happens at the start of this episode. Tagoma is now a tough guy as he had lots of training. He used to be a weakling, but now he can hang with the likes of Piccolo and Gohan.

Tagoma is pretty much too powerful for Piccolo. Piccolo gets his arm ripped out from Tagoma. It’s not until Gohan blasts him away that Piccolo has enough time to regenerate his own arm back.

While Tagoma is boasting how powerful he’s become, Super Saiyan Gotenks comes barging in headbutting Tagoma in the nuts. I am not kidding as you can see from the screenshot provided. It was one of the more funnier scenes of the entire episode. 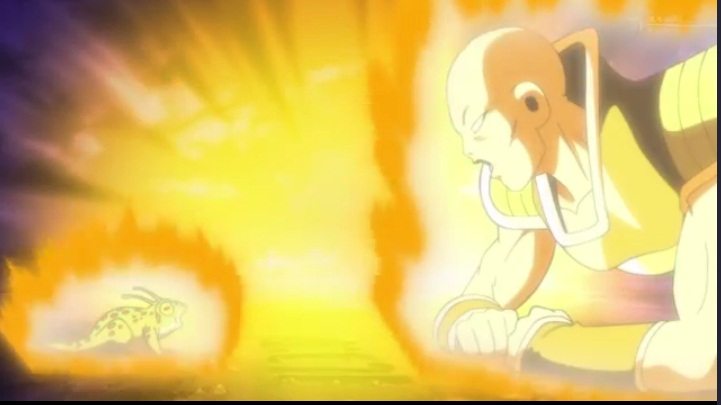 However, Gotenks’ fusion does not last that long as Goten and Trunks get separated. At this time, Frieza lays eyes on the two Saiyan kids for the first time. It’s interesting he didn’t attack them or anything as seeing Trunks made him get scary flashbacks of the Future Trunks killing him off.

Tagoma is trying to get up after getting hit in the nuts. He wakes up and see a frog. This frog is of course Ginyu. Ginyu writes “change” in the dirt and Tagoma says this out loud. This forces Ginyu to change bodies with Tagoma. Ginyu is back in a new body!

Ginyu then tells Frieza his life story on how he became a frog and how he has been living as an amphibian on Earth for so many years after Porunga transported everyone from Namek there. Goten and Trunks also admire Ginyu because of his poses. Jaco just sighs at them.

Ginyu seems to be already familiar with Tagoma’s body as he wiped out the Z fighters effortlessly. Bulma knows they’re all in trouble so she contacts Whis by presenting him with another nice looking dessert. Goku and Vegeta aren’t ready to come back yet as they are still training. They have not reached the Super Saiyan Blue form just yet.

Back on Earth, Gohan is the only one that holds his own against Ginyu/Tagoma. He’s not strong in the base form so he turns Super Saiyan. Ginyu/Tagoma is defeated by the Super Saiyan. This prompts Frieza to torture Gohan. It’s different from the movie as Frieza laser blasts Gohan many times other than just punching him. The episode ends with what looks like a fatal blast that Piccolo takes. This mirrors the time Piccolo saved Gohan’s life with Nappa’s blast.

Again, this was another solid Dragon Ball Super full of the right type of comedy and drama. The original content also makes it a must watch for fans too. Next week, Vegeta and Goku finally arrive on Earth.