Wow, Dragon Ball Super episode 23 featured something that truly did not happen in the Resurrection F movie. It’s worth noting major spoilers will be covered so read at your own discretion.

A major incident occurred in this week’s episode of Dragon Ball Super that may make many fans very sad. I’m not sure why this event happened, but I guess they felt something big needed to happen to add more drama to the TV series. As aforementioned before, a big spoiler will be discussed.

Unlike in Resurrection F, they decided to kill off Piccolo in Dragon Ball Super. Yes, you have read that right. If you remember from last week’s episode, Piccolo protected a laser blast from Frieza that was originally aimed for Gohan. Piccolo once again made the save the same way he did years before when Nappa did something similar.

Many people thought Piccolo may have been severely injured, but it appears Frieza did kill him off. This is sad and will make fans of the character very upset. It’s a ballsy move to make since the movie didn’t kill off any good guys.

Bulma knows everyone is in trouble so she gives Whis another call. At this point of the story, Goku and Vegeta are still training. They are still oblivious to the fact that Frieza is on Earth causing all sorts of trouble. 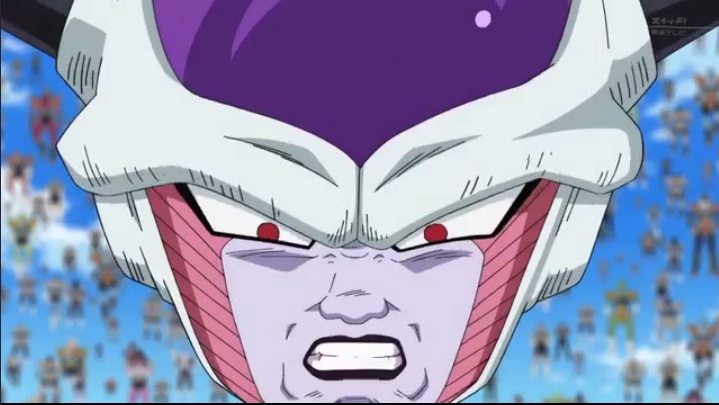 When Whis brings Goku and Vegeta back, there is a funny scene where they have eaten all of the pizza. Beerus wanted more pizza to himself so he chases down Goku and Vegata all over his planet. The fun does not last long though because Bulma’s distress call finally arrives to Whis. She tells everyone what has been going down including Piccolo’s death.

Goku cannot use Instant Transmission yet because he needs to find a powerful ki first. This is where Gohan steps up. We think he’s about to face Frieza and the gang to avenge the death of Piccolo. While he’s powering up, Goku senses Gohan’s ki and uses Instant Transmission to get to Earth. Goku and Vegeta are now on the battlefield!

It’s kind of funny how powerful Goku and Vegeta are. Frieza was about to kill Gohan with his death ray, but Goku deflects it with ease with one finger. As for Piccolo, the only way he can get revived is via the Namekian dragon balls. Goku and Vegeta also tell Trunks and Goten to go as well. It’s too dangerous for them to stay around.

Ginyu (who is inside Tagoma’s body) requests to start fighting the Saiyans. Obviously Goku and Vegeta are confused as they have not heard that name in ages. Vegeta does not show any mercy on Ginyu. He disposes of Ginyu pretty easily. It’s worth noting Vegeta has now eliminated every member of the Ginyu Force. All of them are now in Hell thanks to Vegeta.

Dragon Ball Super episode 23 ends with both Frieza and Goku powering up in their base forms. We don’t see Golden Frieza or Super Saiyan Blue just yet. The first part of their fight begins next week.

Overall, I had mixed feelings about this week’s episode of Dragon Ball Super. I admire the changes that were made from the movie, but killing off Piccolo caught me off guard. I also thought this episode dragged on quite a bit as it was mostly full of talking as they are saving all of the action until next week.

Not to mention this episode made Gohan look very weak. Gohan even mentioned he could have saved Piccolo if he kept up with his training. It’s sad how Akira Toriyama had big plans for the character, but now he’s just a nerd.