We have had to wait for several months, but Dragon Ball Super has finally introduced us to new material. Episode 28 is the beginning of the Champa saga and it does not disappoint.

After the defeat of Frieza, the Earth is at peace once again thanks to Goku and Vegeta. We don’t get an indication on how much time has passed, but it looks like only a few months have gone by. Since the Earth is safe, Goku and Vegeta are back training with Whis on Beerus’ planet.

Goku and Vegeta have weighted clothing on while Whis is watching them while drinking a cup of coffee. Goku is currently doing 50,000 pushups with only his finger. Vegeta is also doing the same thing. Both of them are sweating really hard.

Their training is interrupted however when something comes from the sky and explodes onto Beerus’ planet. The aftershock is felt from miles away and this is noticed by everyone including Beerus who has woken up from his sleep. Beerus is very angry thinking the explosion was caused by Goku and Vegeta. However, it was not them making all of the ruckus.

Beerus doesn’t listen to them and starts throwing laser bombs at them. It is quite funny seeing these two characters getting punked out as they have always been portrayed as strong characters before Beerus arrived.

When the smoke dissipates, we see Champa and Vados. The pair from Universe 6 have arrived. Champa may look imposing but then we see a comedic side of him already. He’s an unfit person as Vados calls him “fat” as he gets tired easily. Vados and him go to Beerus’ door and we see Champa rehydrating himself with a drink. After that, Champa blasts Beerus’ door open.

Beerus is in his pyjamas thinking that Goku and Vegeta caused the explosion again. Beerus then turns around and blasts Champa, although he doesn’t notice who he’s blasting at yet. Champa screams really loud which causes everyone to stop and stare. Beerus finally knows it’s Champa. The two tease one another and Vegeta and Goku look on as both of them are confused. 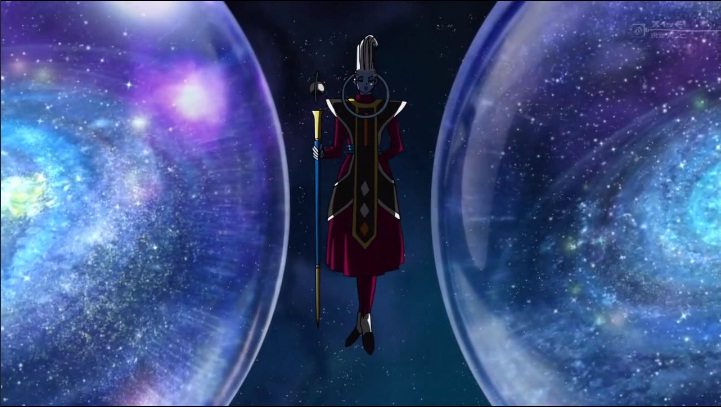 Beerus invites Champa and Vados to his home and Champa is drinking a fruit milkshake of sorts. Vados explains to Goku and Vegeta who Champa is. Champa is the God of Destruction from Universe 6. He is the fat twin brother of Beerus. Vados is the sister to Whis. Champa then feeds the whole group bringing in food from his own universe. They are given eggs.

Beerus then impresses Champa more by feeding him ramen noodles that you can cook with boiling water. For us this is just ordinary food, but Champa and Vados absolutely love it. Beerus tells him that his food is from Earth. Champa says his Universe’s Earth was ruined by humans and their wars.

This is when Whis does some explaining for the Dragon Ball Super audience about the multiverse theory. In real life, we just know that one universe exists which is the one we live in right now. However, there is a theory that more universes exist that are replicas of ours, but are different too. This is not just a Dragon Ball Super thing, real life physicists have theorized this.

Anyway in the Dragon Ball Super world, Universe 7 is the Earth and place that Beerus, Goku and the others live in. Universe 6 is the mirrored version of Universe 7 that Champa and Vados come from. There are 12 universes in total in Dragon Ball Super. There is no good food from the Universe 6 Earth thanks to the Civil War that happened. Humans made themselves extinct. Goku made a funny comment that Vegeta tried to destroy Earth many year ago…

Beerus keeps mocking Champa and Champa gets upset. The two fight and this causes the whole planet to shake. Everyone knows this cannot be good because if two Gods fight, this may cause the destruction of the entire Universe because their powers are so high.

The two agree that fighting each other is not a good way to go (after intervention from Whis and Vados) so they decide to make a tournament out of fighters of their choosing. If Champa wins, he gets to move our Earth into Universe 6, because it has the lovely food and is not war ravaged like his own Earth.

Beerus accepts the tournament because there is a chance he can use the Super Dragon Balls with the help of Bulma. Champa has only collected six of them so far. Not much is explained about the Super Dragon Balls yet, other than they’re powerful than the ones the Namekians make and they’re the size of planets. People that have read ahead on the manga will know of their importance though. The episode ends with Goku celebrating the chance to fight in another tournament. Vegeta joins Beerus’ team too to test out his skills.

Overall, I thought this first episode of the new Dragon Ball Super saga was great. The multiverse theory is something that has never been introduced in the Dragon Ball universe before. Not to mention the story is more unique as it’s like Champa wants to destroy the Earth like every other bad guy. He just simply just wants to move it in another Universe.

In next week’s episode we should know more about the Super Dragon Balls and we also see Champa and Vados trying to recruit their team. Come back next week as we will review episode 29. It looks like we will be in for a fun ride as this saga sounds unique and exciting!