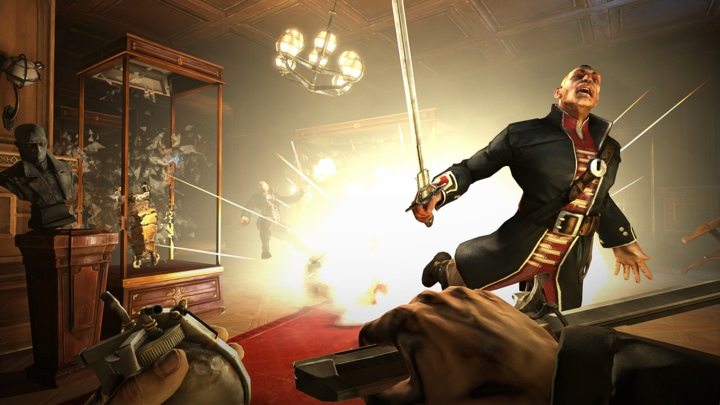 You may have heard of Arkane Studios’ next title; a little game called Dishonored. Published by Bethesda, Dishonored is a steampunk, stealth game involving supernatural powers and an innocent man with a thirst for vengeance. You take on the roll of a bodyguard, Corvo Atano, who has been falsely accused of assassinating the very person he was sworn to protect, the Empress. Using his blade, a handful of weapons, a wide variety of special powers and a vast, open environment, Atano must hunt down the man responsible to clear his name.

After a short time playing the E3 demo for the game, it is apparent that there is quite the learning curve. The demo started about halfway into the campaign, so most (if not all) of the weapons and abilities had been unlocked. There are quite a few powers available to you, including but not limited to: Blink (a kind of limited teleportation mechanic), Possession (possess any living thing to slip passed guards and shielded doorways), Dark Vision (gives you the ability to see through walls), Swarm (spawn a swarm of rats do distract or devour unsuspecting guards) and several more. These powers are predominantly designed to help you sneak passed guards as much as possible, but some are obviously meant to help give you an edge in any given fight.

The control scheme is somewhat reminiscent of Bioshock, where you have your primary weapon (in this case it’s a blade) in your right hand and your power or secondary weapon (guns, explosives, crossbows, etc.) in your left. Funny enough, you’re spending most of your time using your left hand (strange, considering games are usually right hand exclusive) for the powers you have available to you are far to fun and useful in comparison to your little blade. Ammo is scarce, however, so even though the game allows you to go in guns blazing, it’s recommended that you don’t. Unfortunately, sneaking passed guards is not very easy. In fact, some of the powers, such as Blink, have a tendency to backfire on you and not work as well as you had hoped. Then you unintentionally alert a group of guards and are thrust into a fierce battle anyways. Ouch.

The objective was to capture a man named Sokolov from his home (or lab…it wasn’t entirely clear what that place was). Sounds simple, right? Wrong. You have a massive number of ways to sneak in. There is the ability to start at the ground level and pick off guards outside as you move to the main entrance. From the same area, you could also sneak around the guards via some dilapidated buildings and Blink your way onto the ground floor. Or you could do what I kept having to do (because I am evidently not a very stealthy individual) and blow away every guard that noticed your presence.

This is the route that the Bethesda representative who was guiding me through the demo kept advising me to take (minus the blowing the guards away part) as it was his personal favorite. He told me that his method was actually not a method the developers had thought of whilst designing the level. Considering how the game is tailor made for the idea of player-creativity, it seems the game can adapt to a player’s strategy even though that strategy was never intended to appear in game. This pushed me to try something a little different, the obvious decision when you keep dying every thirty seconds. And finally found my own way.

Evidently there’s a way to sneak in behind the building and it is a direct shortcut to your main objective. After twenty minutes of trial and error, a simple change of direction cut my gameplay into a fraction of the time. Goes to show, when someone is giving you advice in a sandbox, follow it once then move onto something else. If that was already obvious then clearly I am thickheaded.

The only downside to the demo that I found is that it isn’t very “newb” friendly. It didn’t give you a whole lot of opportunity to test out the various abilities without the risk of being caught and killed. Aside from that, it was quite a treat. There is a pretty generous aim assist system, but if it wasn’t there you’d probably never hit your target for every time you get hit, the camera sways about and takes a moment to reset. The auto aim really helps you fend off an enemy as you try to recover. This and the occasional waypoint are the only “hand holding” aspects of the game and they really don’t hold your hand that much to begin with.

In short, Dishonored is a wonderful breath of fresh air. It’s an original IP, it’s unique, it’s interesting and it allows the player to play the game pretty much how they want. It’s a shame that we don’t see MORE games like this in a year. The demo was far from a disappointment and it looks like the full game will be just as satisfying, if not more. Dishonored will be available on PC, Xbox 360, and PS3 on October 9. It’s probably a good idea to keep an eye on this if you haven’t already. Just saying’…