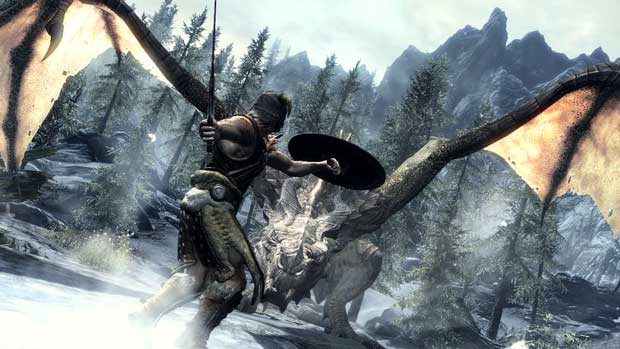 Today would be our first look at The Elder Scrolls V: Skyrim at E3 2011.  In a closed doors meeting, Todd Howard took us on a guided tour of what to expect when Elder Scrolls V launches this Fall.

Todd took it from the top and walked us through the many of the finer points of The Elder Scrolls V.  Much of what I saw today, I had already heard about from various sources.  But to finally see the game in action, I couldn’t help but think to myself that this was unequivocially the best RPG of 2011, and quite possibly 2012.

The brief showing almost felt cramped for as much content and possibility that the game shows.  Though right off the bat, you could see the Creation Engine at work, and the game looked silky smooth from both the first person perspective and newly redesigned third person vantage point.  As the screenshots and videos of the game show, I can confirm that Skyrim is a beautiful place.  Full of details that the developer noted were all designed by hand, and it showed.

Todd looked to be having fun showing off the work of the team, and the new features that were sure to be crowd pleasers.  He showed off some of the new combat mechanics, and took us down a list of spells that had various functions in the game.  He showed battle spells, spells that aided him in navigating dungeons, and dragon shouts, which were rightfully the most impressive of the bunch. As far as spells go, there seemed to be far too many for the developer to show, but he did have his favorited spells tied to d-pad for quick access.  When he actually delved into the menu system, you could tell that were many many more spells at his disposal.Including the Dragon Shouts which seemed to keep the developer out of trouble in many instances where enemies may have had the upper hand on him.

It wasn’t all magic though, he also showed off some very impressive melee combat as well.  The melee combat in the series has been something I’ve  never really been fond of in the Elder Scrolls series.  The animations look much smoother, and from the looks of it, the sword play has a much more fluid feel to it.  In somewhat of a pleasant surprise he unleashed brutal finishing moves on his enemies.  How he executed these moves, he didn’t reveal, but it’s likely tied to the level mechanics of the game.

As we already knew, TESV will have 3D modeling for each and every item in the game.  Howard explained the how and why behind the new design technique, and its implications on the gameplay.  Apparently, some of the items that you’ll pick up along the way will have inscriptions or other clues on how to solve the puzzles which are incorporated into each of the game’s dungeons, which I believe he said were totalling over 150 in all.  Careful examination of the items you collect along your journey can shed light on problems you may encounter.  The level of detail extended from the game world to the menus, and the option to examine your collection of items was just the first layer of detail of measure for your quest.  Your traditional menus, which we have seen glimpses of, are nothing short of amazing as well.  Looking to the heavens to chart your characters skill tree is a nice touch, with what appears to be an extremely intuitive approach to leveling your character, and designing your very own constellation skill tree.  The map can also be pulled down from the menu, which can be expanded for quick travel, and its a far cry from the Elder Scrolls of old.  With a few months to release the game looked extremely polished in all aspects that were shown today.

Taking us through a dungeon, up a snowy mountainside, and into one of the first cities we’ll encounter TESV, the game reeked of excellence.  But what brought it all together was what The Elder Scrolls V: Skyrim was built around, and that was the dragon encounters.  In the demo, Todd showed off two encounters with the scaled beasts.  They seemingly come out of nowhere, and can impede your progress while on a quest.  They’ll instantly swoop into any scenario and start regining down fire upon you.  It was hard to believe when I first heard about it, the dynamic generation of the dragons and how they decide to interact in a give situation.  There are times when you’ll fight a tough battle against on of the beasts only to have another one carpet bomb you before deciding to fly away and leave you be.

Our E3 2011 peaked with Elder Scrolls V.  Seeing it in action, was a bit bittersweet.  It was sweet because from what we saw, everything that has been talked about and promised in the game has been over-delivered.  Which makes the time we still need to wait for the game a bitter pill to swallow.