The latest news in the world of video games at Attack of the Fanboy
June 8th, 2012 by William Schwartz 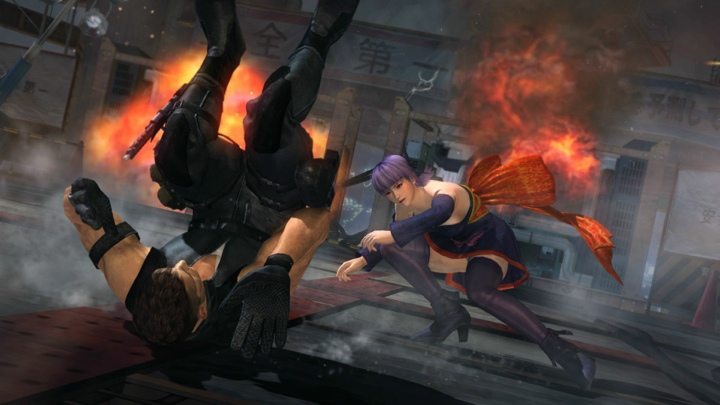 I was surprised when I arrived at the Tecmo booth at E3 2012 to get hands on with Dead or Alive 5. Instead of the standard tour and talking points for the game, I got a complete run-down and demonstration of the new features for DOA 5. This enthusiastic pro-gamer who goes by the name of Ch0sen1 was nothing short of a master at Tecmo’s upcoming fighter.

Dead or Alive 5 has a new type of movement system. In Dead or Alive 4 , if you did a move there was no side-stepping. Therefore, the only options you had would be to block or hold. Now there’s a block, hold, or side-step. “This totally changes the whole game, ” he explained. “Obviously, the new power blow system. The new power blow system is tricky. But once you get the hang of it, its gonna be you that’s the high level player. The game changes at 50% health and allows you to get the edge on your opponent if you can seize that window of opportunity.”

At this point in the interview, Chosen1 proceeded to attempt to teach me the powerblow system, but as he said, “it is tricky” and it is. Each character has a special move that they can use throughout the entire game. It can land if there is an opening during regular play, but if your health is low, the power blow can turn the tides of a battle. Compared to a “super” in Street Fighter, Chosen1 was really excited about the way that this new mechanic would factor into the new gameplay.

“It really can be a game changer,” he explained. But it’s only a game changer if you master the move. Using it at the wrong time can leave you open for counter attacks that can hurt you against players of any skill level, and in an especially bad way against players that can recognize your weaknesses quickly. On the flip side, this new mechanic to DOA also opens up your target for a chained combo after it breaks their guard. As Chosen1 explained, this new system will make upper and lower level DOA 5 players more weary of going in for the kill when their enemy’s health bar is glowing red, signaling the ability use the power-up.

There could be some trickery involved he told me, as high level players can fake using the move, and cancel it during its charging period. Adding another layer to fast-paced chess match between top DOA 5 players. And fast it was. As he displayed the cancelling techniques, it was not a input that was easy for a new comer to learn, but with some more time with the game, it didn’t seem impossible.

But what we began to go over next was probably the most impressive thing about the new game for those of us that may never reach the pinnacle of high-level competition in this fighter. Visually, Dead or Alive 5 is beautiful. But, the new “Danger Zone” animations that are triggered on varying levels, is amazing. On par with any of the animations that are found in titles like Street Fighter, Mortal Kombat, or other top-tier fighters. Dead or Alive 5 features a variety of ways to use the environment against your enemy to juggle, earn extra damage, and at times, dive into full cinematic attacks that transition within the multi-tiered levels.

For high-level players this once again changes the way that the game is played. “As the camera pans around, the environment has different parts. If it hits this, you can blow them up (points to a barrel), it hits that it may knock them off a cliff. It also changes the way you might choose to do a juggle. You might choose instead to do a move that doesn’t max out the juggle, but earns more damage by hitting your opponent into a piece of the envrionment that takes extra health from your opponent. It really changes your whole perspective.”

After getting this great tutorial from a player who knows the ins and outs of the game, I put these techniques to work, and surprisingly I dominated the next two players to walk up to the kiosk, unknowing of my recent training. What I was told is that the game is a little over 50% complete, which was surprising considering just how well it was playing. Making it an even longer wait for the return of the Dead or Alive franchise.