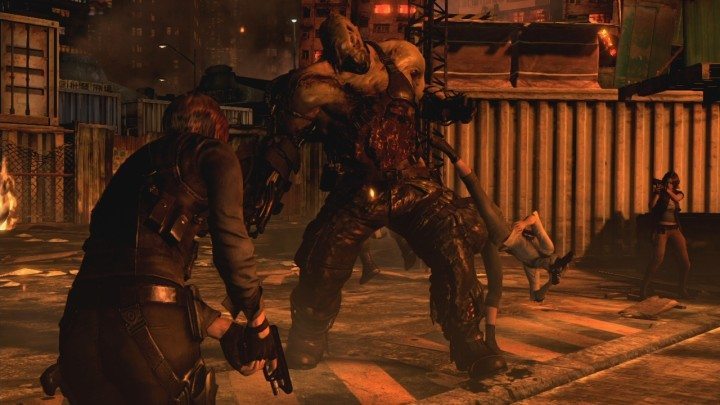 We recently got a chance to sit down with Yoshiraki Hirabayashi of Capcom, to hear more about Resident Evil 6 and its branching storylines in an interesting inclusion to the single player portion of the game called “Crossovers”.

As you may or may not know, Resident Evil 6 will have three separate story strands, with separate main characters. The story strands stand alone as gameplay experiences, but at certain points, they will also actually intersect with each other. The story cross-over points with thrust characters into each others’ worlds for cooperative play experiences.

Given an example structure, Capcom’s Hirabayashi noted that what we were seeing was not from the “actual story structure of Resident Evil 6. As millions of players set out on their personal Resident Evil experiences across the world, they’ll at some point or another need help to pass certain areas of the game. It’s here where Capcom will introduce a matchmaking system that will merge game worlds and unite players to defeat a common enemy.

In the demo, we saw Leon and Helena after a crash landing puts them in China. They meet up in a story intersection with Jake and Sherry Birkin, who had been in China for a mission in their single player campaign. The large Ustanak monster reveals itself, and as Hirabayshi explains it “You’re going to need all for players playing together to take down this bigger, tougher enemy.” While they were showing off the brand new cooperative structure, we did also get a glimpse at the new running and shooting mechanic. We also saw rolling, dodging, shooting and even shooting from the ground.

The massive enemy gave the perfect opportunity to see the new combat mechanics, but also showed off some of the defensive gameplay that was needed when your teammates had been downed by the imposing foe. The encounters are said to be quite lengthy, and can branch off significantly giving you a new short-term partner while taking the necessary steps to defeat your enemy.

“We tried to put each storyline together with uniqueness for each, while bringing them together through the common threads that were shown in today’s demo,” said Hirabayashi.

When the demo was finished, Hirabayashi opened to Q&A:

If the AI is playing with you does it make it more difficult to complete?

“We’ve improved the AI substantially since Resident Evil 5. As you’re battling this guy(Ustanak), he’s gonna start taking the AI out.  There going to start getting reduced, and you might be left with yourself, and a lot of pressure.  You’ll be really glad when you get to the crossover points, and get either AI or human allies with you for certain parts of the game.”

How did you manage to balance the importance of all three plots in one game?

“We tried to put each storyline together with uniqueness for each, while bringing them together through the common threads that were shown in today’s demo.”

‘You’ll be given the option when you reach certain points of the story to allow anyone on the online network to join you, or freinds only.  When that happens timing is an issue, so you would want your friend to be playing on his side as well.  You basically want to come to the same point in the story at the same time.  That way, you can increase the chances of being matched with your friend.’