How to Unlock All Specialist Companions in Far Cry 5 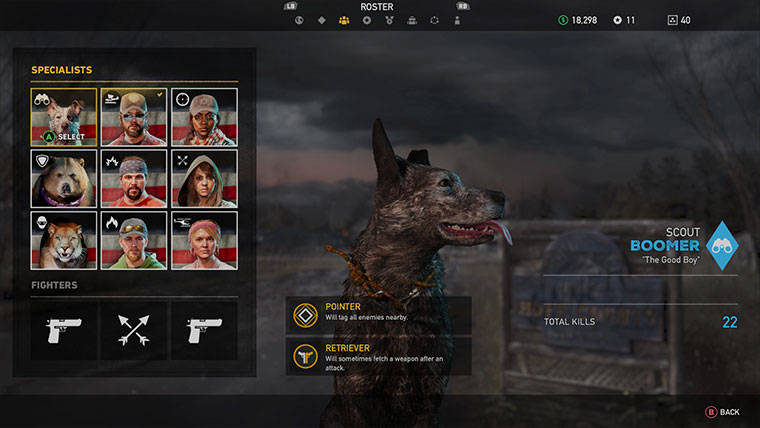 Throughout the course of Far Cry 5 you’ll encounter numerous missions that allow you to add Specialists that you can call on to help you defeat the Cult.  These characters can only be unlocked by completing certain missions, but the reward for doing so is being able to call them in to help you whenever you need it.  These specialists don’t need to be unlocked in any order.  The game starts you out with only one slot available for teammates, but acquiring a perk will allow you to add up to two specialists characters to your squad at any time.

If one of these Specialist characters fall while in battle you can revive them.  If you fail to do so, you won’t be able to call them back in for a set period of time.  You can check the Roster Tab in the game’s menu to see how long each character has before you can call them back in.

Complete “A Dish Served Cold” Story Mission
This mission has you tracking down one of the cultists known as the “Cook.”
Stays concealed from enemies.
Friendly with wild animals.

Complete “A Right to Bear Arms” Story Mission
You’ll need to catch a fish and then bring it to Cheesburger.  After he’s up and moving again you’ll need to defend him from the cult.
Strong melee attack
Can draw focus away from you when in battle

Complete  “Grace Under Fire” Story Mission
She is a sniper who you meet that asks you to protect the graves of fallen soldiers as the cult tries to deface them.
Sniper Support
Has a laser sight on her weapon that helps point out enemies.

Complete “Wingman” Story Mission
A pilot whose plane has been taken by the Cult. You must simply find the plane and then bring it back to Nick.  To add him to your roster.
Can drop bomb’s on enemies from planes
Can perform strafing runs against enemies with plane

Complete “Man’s Best Friend” Story Mission
Boomer is dog available as a companion that must be liberated in the mission to unlock him.
Will automatically tag nearby enemies
Can sometimes fetch a weapon after attacking

Complete “Burn Baby Burn” Story Mission.
In it Sharky seemingly wants to have some fun by listening to music and killing cultists.  Complete the mission to add him to the roster.
Attacks have spark effect
Resistant to most explosions and impacts

Complete “The Prodigal Son” Story Mission
Get Hurk’s father’s truck back from the cultists.
Has RPG that can track air and land vehicles
More destructive RPG attacks on vehicles

Complete “Here Kitty, Kitty” Story Mission
You’ll need to go to a nearby campsite and lure Peaches back to her owner.
Stealth pounce attack
Stays hidden in tall grass

Complete the Mission “Friendly Skies.”
Get Adelaide’s chopper back from the cultists.
Can deliver you an attack helicopter
Needs to reload less often

There are also other characters that you can call on in battle that have different specialites that you’ll encounter when saving different NPCs in the game.  They have different buffs depending on the character.  These range from being untrackable, to reparing vehicles, and many more.  Abilities of these soldiers can be unlocked by getting kills while teamed up with this unit.