Is Fortnite Better Than PUBG?

The latest news in the world of video games at Attack of the Fanboy
February 16th, 2018 by William Schwartz 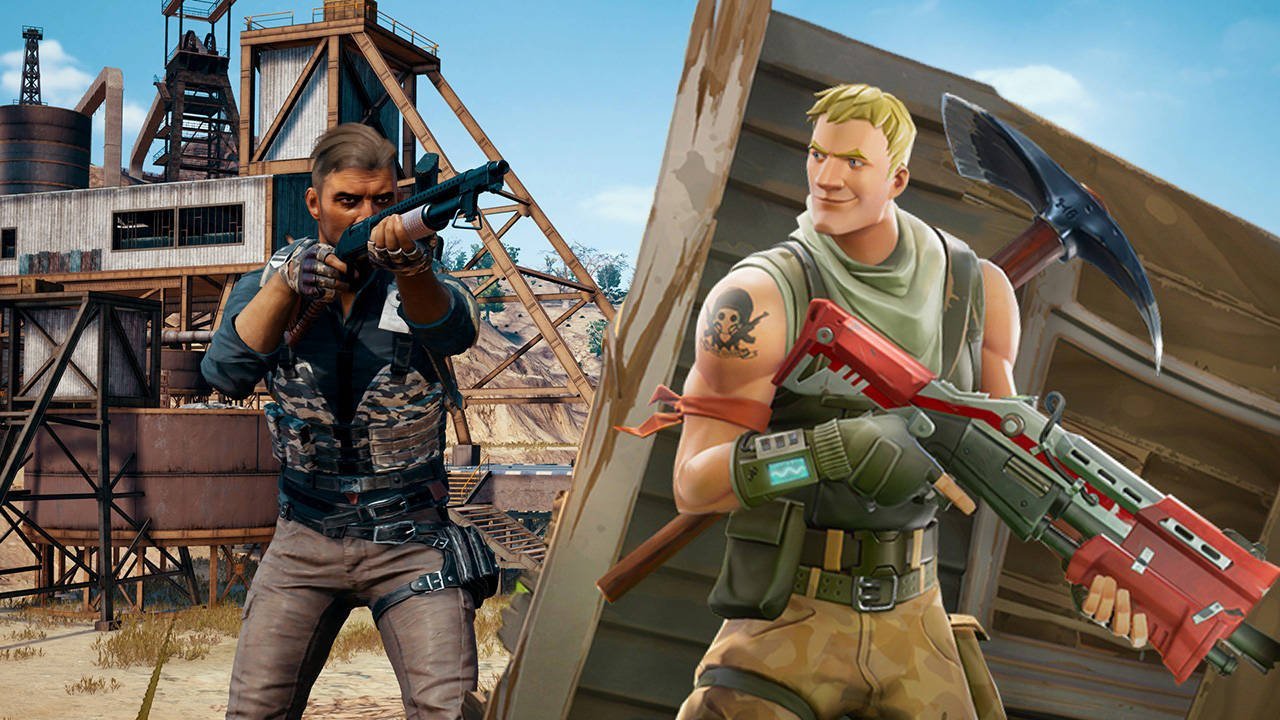 The Battle Royale era may have been ushered in by Player Unknown’s Battlegrounds, but Epic Games’ Fortnite has been coming on strong recently.  Throwing a ton of development resources at the game, making it free to play, and keeping their ears directed at the massive community that’s playing the game, they’ve steadily caught up with PUBG in terms of the number of people playing the it.  So which game is better and which one will better suit you?  Here are some reasons why Fortnite is better than PUBG and some reasons why you might think that PUBG is better than Fortnite.

PlayerUnknown’s Battlegrounds strives for realism in its gameplay.  While on the other hand, Fortnite is something that is more fantasy oriented.  But both have the same objectives whether playing by yourself or with a team… be the last ones standing.  PUBG is a calculated game.  Everything about it from the moment you parachute out of the plane and pick your strategic first looting spot to your movements towards the middle of the circle and ultimately victory is a calculated move.  With 100 players on the field you must pick your spots carefully as to when to shoot, when to move, and when to do absolutely nothing.  PUBG is in many ways like a horror game.  You’re out on a massive map and for the most part you’re by yourself or with teammates.  That is until you hear footsteps nearby or gunshots ring out.  Then it becomes a game that incites pulse quickening tension, as you frantically try to get a fix on where your closest enemies are.  Fortnite, on the other hand, is a little less forgiving and does have unique mechanics in it that allow for building structures while in combat.  The gameplay isn’t as rooted in reality as PUBG and you could call the gameplay “arcadey.”  The shooting is more approachable for newcomers, but let’s not mistake that for its own depth.  As a result of this approachable nature, Fortnite cast a wider net as more people are able to pick up and play the game, having a good time while learning the nuances of the game and improving.

Free to Play vs. Full Price

Another reason why Fortnite has been adopted at such a rapid pace is that it’s free.  What started as a cooperative game that was charging obscene upfront prices as an Early Access that had somewhat of a following turned into a game where millions are playing on a daily basis, and that’s likely because anyone can play it.  There’s nothing lost other than the data that’s been used to download Fortnite’s Battle Royale.  If you try it and don’t like it, you’re not out anything.  Epic’s strategy with Battle Royale to monetize these millions of players is to allow them to buy cosmetic skins for their characters.  Epic is following the good guy playbook with Battle Royale and we’ve seen no signs that they plan on trying to change what’s been working.  On the other hand, you’ve got PlayerUnknown’s Battlegrounds.  On PC this game is in full release with two maps and all the most current features.  On Xbox One, this game is still in Early Access and it’s got scores of issues at the moment.  Regardless of where you play PUBG, you’re paying for it.  On Steam the game costs $29.99 and the unfinished version costs the same price on Xbox One.  That said, the PC version of PlayerUnknown’s Battlegrounds uses a points system in which players accrue Battle Points by playing the game.  These points can be used to customize your character and purchase crates which contain cosmetic items.  The wrinkle here is that PUBG also uses a premium crate system that require keys to unlock which costs cold hard cash.  But even if you do purchase a key there’s no telling what you’ll get out of the loot box.  It could be an incredibly rare item and it could be common.  Either way, you’ve just spent more money on the game.  The Xbox One version does not include these types of microtransactions… yet.

Both PlayerUnknown’s Battlegrounds and Fortnite: Battle Royale run on the same game engine.  This game engine was developed by Epic and licensed to PUBG Corp. for their game.  While PUBG has seen a ton of updates and made good progress since its launch in early access, it’s recently become clear that Epic is able to scale up more quickly than the upstart.  In fact, Epic Games has an all hands on deck situation for Battle Royale.  They’ve shuttered other game development projects to focus on bringing out updates and new content at a blistering pace.  PUBG on the other hand feels like a company that has their hands full in supporting just the PC and Xbox One versions of the game.  Updates are rolling out slowly for PlayerUnknown’s Battlegrounds and Epic Games is putting Bluehole to shame when it comes to adding new content to the game.  Fortnite has seen numerous map overhauls and tweaks to the game’s gunplay and the developer has a finger on the pulse of what the community wants from the game and manages to move quickly.  Epic has added seasonal content to Fortnite in short order.  This initiative gives players a reason to come back and play the game other than to just see the latest feature released in a patch.  These seasonal events add limited time skins and other reasons for Fortnite players to stay engaged with the game. PUBG, while seemingly listening to the community, is clearly slower to act in this regard and doesn’t appear to care about this player retention and engagement in the way that Epic does.  If they do, they certainly aren’t showing it or announced any plans to indicate that they do.  If the Battle Royale arms race continues at this pace, Epic Games Fortnite  will be everything that the community wants it to be, while PlayerUnknown’s Battlegrounds will be playing catch-up.

Do you play on a console or PC?

A PC game that’s being ported to the Xbox One is having its growing pains in PlayerUnknown’s Battlegrounds and it’s unclear if it’ll ever offer the same experience that it does on PC.  This is due to some optimization issues in Early Access, but it also lacks the snappy controls that the big first and third person shooters of the console landscape have.  Getting PUBG to feel acceptable on the Xbox One, players need to wrangle with things like input lag and sensitivity settings just to make the game playable.  There is no one size fits all scheme for PUBG on the Xbox One.  While all first person shooters have this to some extent, the controls for PUBG still doesn’t compare to other FPS designed explicitly with a console control scheme in mind, even when that sweet spot is found by the player.  There was no real consideration about how to make the interface more friendly for console players.  The approach was more of a how can we fit all these controls onto a gamepad, and it shows.  Fortnite on the other hand feels a lot better with a controller in hand.  Sure, PC players will always have the upper hand when it comes to multi-tasking but it’s glaringly obvious from the moment you pick up Fortnite that it just feels more at home on consoles.

If you play exclusively on the PlayStation 4, you don’t really have a choice at this point.  While the developers of PUBG have expressed that they’d love to have the game available on all platforms it’s simply not available at this time on the PlayStation 4 and there’s no clear cut timeline regarding when PUBG will arrive on the platform.  As it stands it’s a console exclusive for the Xbox One at the moment and some have cited the Early Access nature of the game on Xbox One.  If you’re holding off for PUBG on PlayStation 4, you might be a benefactor here.  Bypassing all the problems that PUBG currently has on consoles in its early access state might be a blessing in disguise.  Even the mighty Xbox One X has trouble with PlayerUnknown’s Battlegrounds, but when it finally does release on PS4 it’ll likely be the 1.0 version.  Fortnite on the other hand has another advantage here of being available in more places.  PlayStation 4 owners, just like Xbox One and PC players can all download Fortnite for free on the respective marketplaces.

There’s no denying that Fortnite is designed for the casual gaming audience.  A game that is designed to cast a wide net, pull players in and let them have fun in this goofy world they’ve created.  Sure the rules are somewhat the same, but Epic’s brand of fun is much different than Bluehole’s.  For PUBG players the fun is in the competitive nature of the game.  There’s a sense of competition found in PUBG that Fortnite doesn’t have, and that’s largely because they exist for different audiences.  This is clearly evident by PUBG’s push into the e-sports arena.  They want this game to be THE competitive Battle Royale game.  Epic on the other hand doesn’t seem like they care at all about these things, as long as players are having fun.  The rule sets for both games are designed according to this.  In Fortnite you’re way more likely to see something unique and often times funny than you are in PlayerUnknown’s Battlegrounds. While PUBG certainly has its own spectacular moments it’s a more rigid experience, while Fortnite is anything but.

Is Fortnite better than PUBG?

If you read through this article you’ve probably come to the same conclusion that we did after playing each of the game extensively over the course of months.  They’re two different games that can coexist with one another.  There’s really no reason to say that one if better than the other and those who do will likely be saying that because their preferences align with what each game is offering.  While they do have some overlapping qualities that can appeal to multiple audiences and types of players, there is no real answer here.  If price is your consideration, Fortnite is better than PUBG as it’s free. If you’re looking for a tense competitive experience in your shooter, you’ll likely feel PUBG is better.  If you’re just looking for a little fun, you’d probably enjoy Fortnite more.