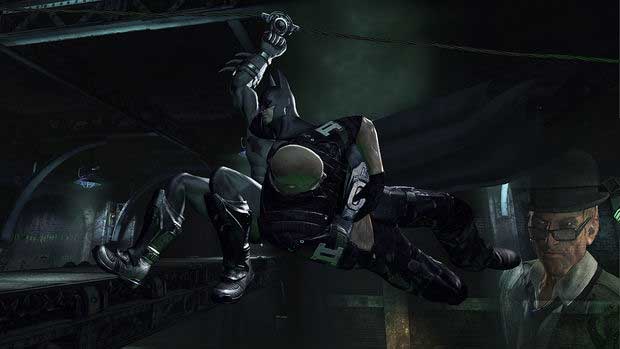 Batman: Arkham City, like its predecessor, Arkham Asylum, is an action game that incorporates elements of stealth and predator tactics. All of the gadgets previously obtained in the first game will be present at the start of Arkham City, some possessing improved or new capabilities. At least two additional gadgets have been revealed: smoke bombs which Batman can use and sneak away in the confusion, and a broadcast tracer device to locate signals and track them to their sources.

The game incorporates more puzzle elements; the use of Batman’s “Detective Mode”, which highlights elements such as enemy skeletons and clues on-screen, is used to perform forensic analysis at crime scenes, such as tracing the origin of a sniper round.

The player also has access to a criminal database that tracks the major villains across the city that is used within Detective Mode and the forensic puzzles.However, Rocksteady’s art director David Hugo stated that the use of Detective Mode will be changed to an “augmented reality mode”, as they found players had completed Arkham Asylum using Detective Mode all of the time.Optional challenges from the Riddler to collect hidden trophies placed around the city will also be present, but it will require additional effort to locate these, such as through interrogation of men loyal to the Riddler.