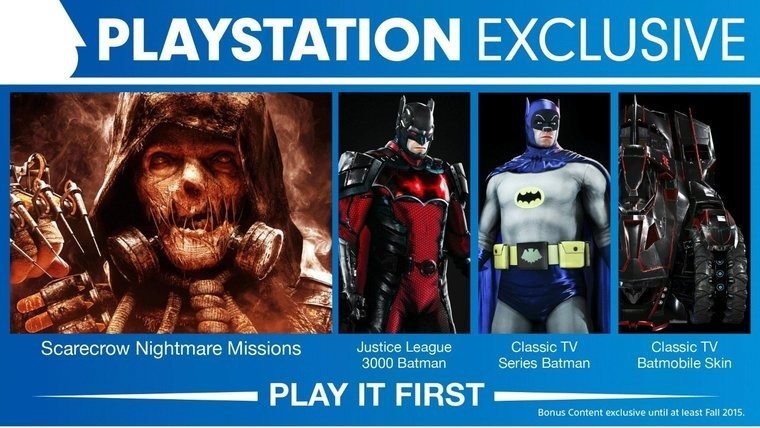 Batman: Arkham Knight will certainly be the hottest game of the summer, set to release on June 23 after the recent delay. Dating all the way back to Batman: Arkham Asylum, the PlayStation platform has been the preferred system for awhile, with exclusive content even back then. We knew that PlayStation 4 was going to also be getting exclusive content for Batman: Arkham Knight, but now we have a better idea of how long that exclusivity will last and details on just what that content will be.

Just like with the details of the Harley Quinn pre-order DLC, Amazon has provided us with all of this brand new information through its listing for Batman: Arkham Knight. Coming from the listings for the console bundles for the game, the following description was given for this extra content:

The listing itself did not give details about how long it will be exclusive to PS4, but an image that was added to the page gives us a little more of an idea. According to the image seen above, this special DLC for Batman: Arkham Knight will be exclusive to PS4 through at least Fall of 2015. This actually isn’t all that long, considering that is only a few months after the release of the game in June. Destiny’s PlayStation exclusive content in comparison was listed as much longer, so we’ll have to see how WB Games handles this with the wording of “at least.”