The latest news in the world of video games at Attack of the Fanboy
October 15th, 2011 by William Schwartz 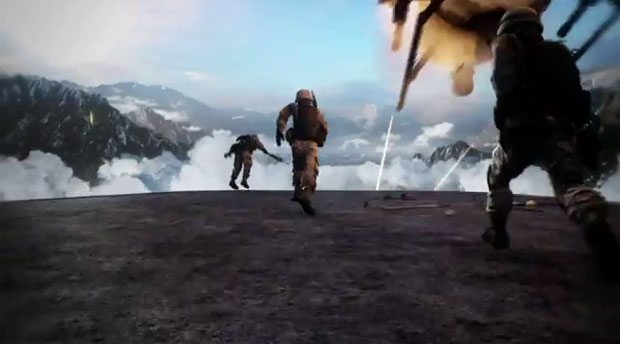 Talk about variety.  How does two spawns that have 500M of vertical distance between them sound?  DICE has always been one to give you unique perspectives in the Battlefield franchise, but the Damavand Peak Multiplayer Map in Battlefield 3 looks to be another one of those opportunities for the developer.

DICE told fans that the map is internally known as “base jump” because that’s the star of the show here.  Attack in Rush are said to start high over the battlefield with the only way down being off a cliff.

It could be a modern day “Battle of Normandy” where players need to avoid incoming fire on their decent, but once a man touches down, obviously the squad spawning can begin.  That’s just rumor at this point, but with such a unique feature in the map, it’s hard not to think of interesting ways that it can be used within the game.  In the series of trailers called “Fault Line”, the video depicts soldiers leaping off the edge with a helicopter just ahead, come to find out, that’s what you’ll be doing in multiplayer.  Epic.