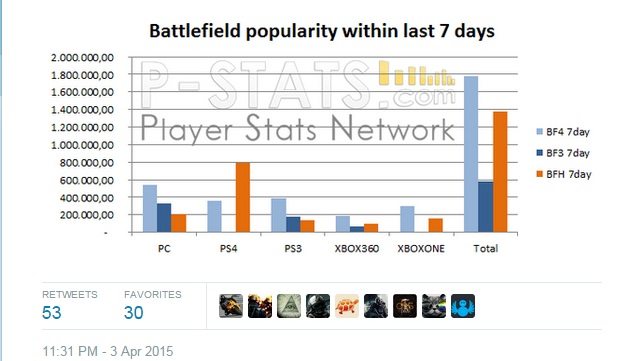 Battlefield Hardline may have just come out, but more people seem to be playing Battlefield 4 at the moment.

P-Stats Network shared the following graph (pictured above) that shows the total number of Battlefield 4 players are actually higher than those for Battlefield Hardline.

Battlefield Hardline was the least critically acclaimed game of the series, and it also had a new cops and robbers theme. Battlefield 4 had a shocking launch, but the game has become more playable and popular. The fourth game is much better now than it was back when it came out in 2013.

It’s likely Battlefield 4 is still more popular than Battlefield 4 because the game has been out longer. Within the next few months, we may see the Hardline player count rise.

Another thing we can take away from this is that players are now shifting away from the PS3 and Xbox 360. There are far more players on the PS4 and Xbox One.