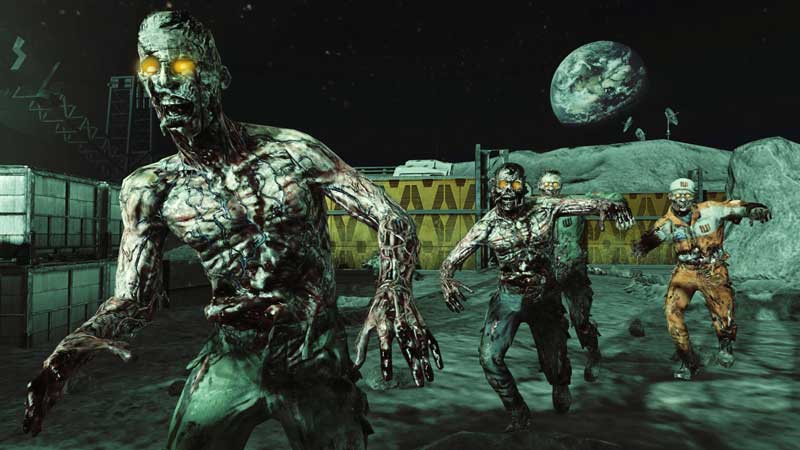 Lift off into the latest Zombies epic with “Rezurrection,” the new content pack for “Call of Duty: Black Ops,” and the first to launch players into space! Old school Zombies strategies get blown out of the airlock in “Moon,” where armed with new perks and a space-age arsenal of weapons, our heroes must overcome undead astronauts and fluctuating gravity as they unearth conspiracies that began in 1943. Rounding out Rezurrection are the 4 maps that spawned the Zombie phenomenon: “Nacht der Untoten,” “Verrückt,” “Shi No Numa” and “Der Riese.” – Activision

Moon level is a great content addition – The Moon map in the Rezurrection DLC pack is probably the most ambitious of any of the zombies content that Treyarch has produced.  The map sets you in an environment with zero gravity, and as usual, you’ll be fending off wave after wave of increasingly difficult zombies of numerous variations.  The Moon map has plenty for both the passive zombie’s player or the hardcore Easter Egg hunter.

As the game mode has evolved, so has Zombies, and Moon is by far the one with the most moving pieces and atmospheric environment.  It’s split into components where you’ll be battling in zero gravity, requiring that you wear a space suit for oxygen, while proceeding through the level to complete the standard objectives like turning on the power and collecting power ups to aid you in survival.  The zero gravity effect is a neat touch to this new map, and is the most unique addition to the mode yet.  Your zombie slaying arsenal has expanded for the new map, and if good enough, you can find yourself fending off the undead with the Wave Gun and the Quantum Entanglement Device.

The Wave gun is the weapon that was highlighted in the “Zombie Labs” video and makes the monstrocities gradually inflate before exploding into a bloody mess.  The QED is used like a tactical grenade that causes random effects on the playing field.  Sometimes it will explode, other times it will produce other acts of random, like spawning weapons or awarding power-ups.

The moon is a pretty complex little area as it has quite a few doors that can be opened, as well as a telporter that will take you back and forth between an area called “Area 51” and the Space Station.  Going back to Area 51 is a deadly proposition without adequate weapons.  The zombies come fast and furious, but the good news is you’re just a telporter away from getting the heck out of Dodge.  You’ll need to go back to area for specific perks if you want them all.  Since the pack-a-punch machine is located there you’ll eventually be heading back at some point.  But starting out, you are overpowered in the earthbound area.  To go back and forth between areas you’ll need to be communicating with your team as each team member needs to be on the teleporter for it to work.  This can cause some headaches if you have a player going lone wolf, but shouldn’t be an issue as long as the lines of communication are open.

On the moon you’ll be dealing with a few new types of zombies as well. One is The Astronaut, which takes quite a bit of damage, and if you let him get too close, he’ll teleport you away from your team.  The other is a Phasing Zombie who teleports seemingly within harms reach without much of a warning.  The zombies come from everywhere in the new map, and its quite easy to get overwhelmed.  The best policy is to communicate and hold down strategic areas as has been the standard for as long as zombies has been around.

Of course, to get the most out of the Moon Level you’ll need to learn all of the nuances of the level.  There’s an end game included in this last zombies map, called “Big Bang Theory” where you’ll need to complete specific objectives within the map as well as have earned achievements on previous zombies maps.  It ties together the zombies experience as a whole, but without help, it’s certainly not easy.  There have been countless tutorials on how to accomplish the Easter Egg but if you can’t get through them yourself, you can always have a look at how’s it done here.

Alongside Moon, there’s a bit of zombies nostalgia included in the map pack.  Remastered versions of the original zombies maps from Call of Duty: World at War are certainly a trip down memory lane.  They include some visual upgrades and new audio tracks have been laid down, but for the most part they are the maps that you remember.  Having a playthrough on some of the old maps will definitely give you a sense of how far the mode has come since the first zombies map appeared as an Easter Egg after beating World at War’s campaign.

Fool me twice – As good as the remastered maps are in Call of Duty: Black Ops Rezurrection, they are the bulk of the content included in the purchase.  That being said, unless you are a die-hard zombies fan that can’t get enough of the mode, you might be left scratching your head as to why there isn’t more new content included in the map pack.  If you played the old maps before, you likely paid for them once already (like I did), and are now paying again for the same content more or less.  There simply aren’t enough enhancements to the remastered maps to warrant a full priced map pack for those that have purchased the content previously.

For those that haven’t played them before, its an entirely different story.  You’re getting an immense amount of new content that you’ve never played before and I can certainly see the appeal for fans of the mode that just joined the fight with Black Ops.

Matchmaking Problems – I’m not sure whether it’s the zombie centric map pack or some other server side issues, but personally I have been experiencing extreme difficulties in getting a public game started in any of the new maps.  There seems to be a Host Migration error that is plaguing the mode upon release, and hopefully the kinks are ironed out to make the public matchmaking more accessible.  The zombies mode has always been best with friends so it’s not a complete deal breaker, and games can be found through a number of different methods.  Private matches don’t seem to be having the same problems, so inviting recent players is always a viable option.

Some might be bitter about swallowing another 15 dollar pill for the remastered zombies maps from Call of Duty: World at War, but as a zombies fan there’s no other way to get the remastered content other than hopping in a time machine set for November of 2010 and picking up the Hardened Edition of Black Ops.  Paid for them once before or not, they definitely are a fun time, and the new map is a blast to play with plenty of secrets to discover. It might be the only map pack I’ve had a legitimate gripe with over the past year, but it certainly wasn’t for anything related to the quality of the content included.