The latest news in the world of video games at Attack of the Fanboy
June 14th, 2013 by William Schwartz 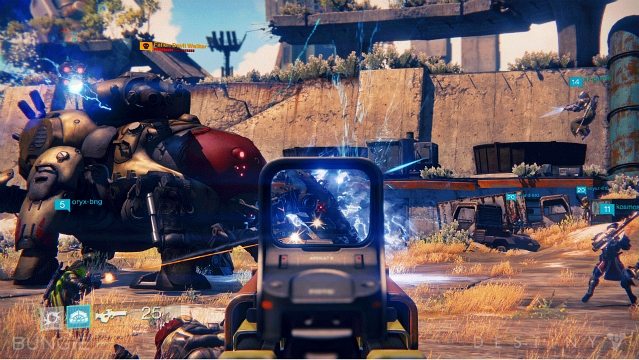 With E3 2013 having come and gone, Bungie’s Destiny is still very much a mystery. Despite being tight-lipped about the game up until this point, it appeared that Bungie was ready to steal the show with their first gameplay reveal of the upcoming shooter. But Bungie fans didn’t need to tune in very long to get their first taste of the game, the only new details that came out of the show was the gameplay that was revealed at Sony’s E3 Press Conference on Monday night. The team at Bungie obviously had a very specific message that they wanted to share with show attendees, and had very little else to explain what Destiny is.

We didn’t need to fly out to Los Angeles to see Bungie’s next game, nor book any time to take a look at the game in their “behind closed doors” presentation. What we saw was the same thing that the millions of fans viewing the PlayStation press conference on Monday night were treated to. For all intents and purposes, what we saw was a game that looked very similar to Borderlands with a bigger scope and MMO-like public events. The problem is, this scope was neither explained nor showcased well in either of the demos that we saw.

We were treated to a glimpse of Destiny’s alleged massive world in our viewing, but aside from taking the time to basically look into the distance, we weren’t given very much to go on in terms of scale. The game looks massive, beautiful, and will likely have the same tight controls that made the Halo franchise incredibly popular, but again, this is just going on Bungie’s pedigree. There was really nothing that we were shown or told to actually confirm any of this. The same scripted gameplay sequence that was shown at Sony’s E3 Press Conference was all we were treated to, and it prompted the question of why Bungie is still being so secretive about this project just months ahead of release.

The most important part of E3 for a lot of attendees is to talk with fellow game players and industry participants that have come to the show. We’ve come from far and wide to see the latest and greatest of the video game world, but when talking about Destiny, one topic kept coming up. What is Destiny exactly? What we were shown isn’t something that we haven’t seen in other games before it. The looting mechanic and class based gameplay certainly was a reminder of just how addicting the Borderlands/MMO loot grind can be. There was certainly flairs of Bungie’s greatness and the visual potential of the next-generation, but nothing that really made it stand out from the myriad of other shooters that are either on their way, or have come before it.

It may not have been the most entertaining presentation option, but those that were looking for more details about the systems of Destiny (like us), would have loved to hear more about what will make this game special. Co-op shooters aren’t exactly a brand new thing in the video game world. From what we saw, Bungie’s Destiny looked a little more like Gearbox Software’s destiny, if they had a bigger bankroll.