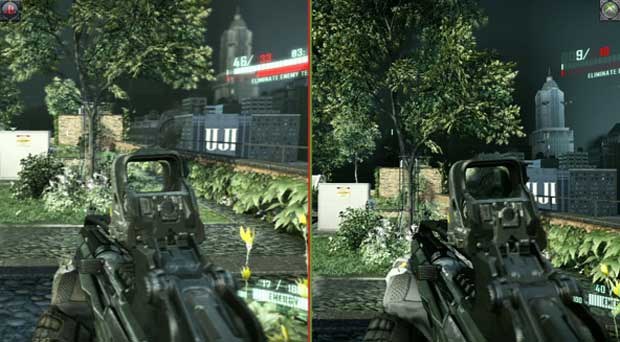 There’s been some controversy brewing regarding the PS3 and Xbox 360 version of Crysis 2.  PlayStation 3 users might be getting the short end of the stick again when Crysis 2 releases next week.  First spotted by IGN when playing the PS3 version of the game, the publication claimed that the game was noticibly better looking on the Xbox 360 and PC then it was on the PS3.

The verdict? Not so great, unfortunately. The performance of the PS3 version is pretty underwhelming. The framerate is frequently low and choppy. There are jagged lines everywhere, and shadows are especially messy. There’s a muddiness to the graphics that’s hard to stomach in the wake of the PS3’s other flagship showpieces, and worse, the variable framerate really hurts controller response. – 3.3.11

Well yesterday the demo finally released for the PS3 and our friends at the Lens of Truth have begun their comparison as usual with the demos for the game.  Looking at the Xbox 360 and PS3 there actually does seem to be a little bit better clarity in some of the Xbox 360 shots. Users over at Lens of Truth have voted in a landslide that the Xbox 360 version looks superior, but this goes in contrast to what the developer actually stated today.  Claiming that there is no difference between the two versions “due to “the core of the CryEngine 3”  and “under the hood magic”.