The latest news in the world of video games at Attack of the Fanboy
December 20th, 2017 by Jelani James 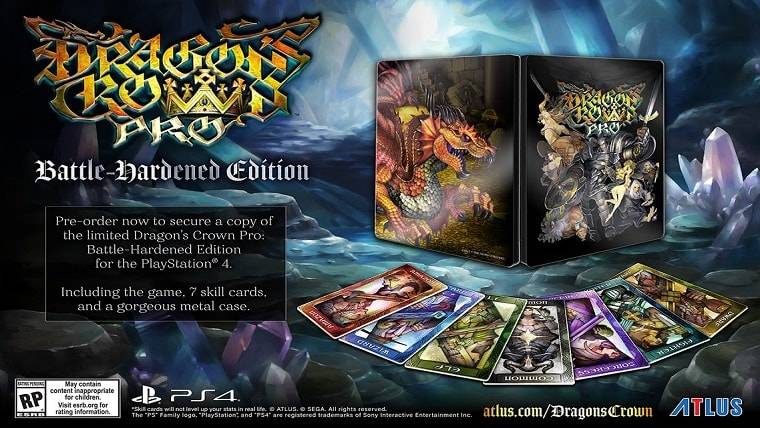 Dragon’s Crown Pro is coming soon and Atlus is keeping fans excited with the announcement of a shiny limited edition that will be exclusive for fans in the West.

Titled the “Battle-Hardened Edition,” the limited edition of the game will feature a special case and various cards depicting the skill cards used by each of the game’s six classes. None of this will cost players extra, as first-print and pre-ordered copies of Dragon’s Crown Pro will be automatically upgraded to the Battle-Hardened Edition. As such, simply being among the first to pay the default $49.99 USD / $64.99 CAD when the game launches will be enough to guarantee access to the bonuses the limited edition provides.

To recap, Dragon’s Crown Pro is a remaster of 2013’s Dragon Crown for the PlayStation 3 and PlayStation Vita. In the game, the player controls one of six characters and takes them through a variety of dungeons as they search for a special item called the Dragon’s Crown which is needed to save the kingdom of Hydeland from ruin. The game is formatted like a classic arcade beat-em-up and keeping true to its roots, up to four players can play together.

The core of the game will remain intact for the remaster, but Vanillaware saw it fit to provide a variety of primarily visual and audio improvements, such as 4K resolution support, a newly recorded soundtrack via live orchestra, cross-play with the PlayStation 3 and PS Vita versions (w/save data importing) and dual audio support.

Dragon’s Crown Pro will arrive on the PlayStation 4 on Feb. 8, 2018 in Japan, while the West will be able to get in on the action at some point during Spring 2018.