EA Access is a New Subscription Service Exclusively on Xbox One 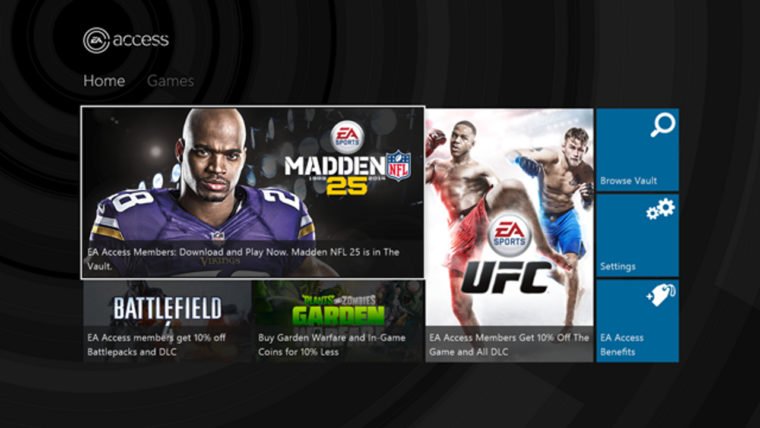 Electronic Arts has just announced a new subscription service that they will be offering exclusively on Xbox One. The service is called EA Access is a monthyl or yearly subscription that will let you download and play certain EA games. EA is calling the selection of games “The Vault”, which is said to contain “a collection of EA’s biggest games on Xbox One ready for you to download and play.” Along with the games comes other perks like early and exclusive demos and a 10% discount on other EA games.

A subscription to EA Access starts at $4.99 a month, or $29.99 a year. It is currently in beta implementation, so only a limited number of users have been offered a chance to subscribe. A full roll out is planned soon though, so if you aren’t one of the few invited and wish to subscribe you’ll just have to wait a little while longer.

The current selection of games on offer are FIFA 14, Madden NFL 25, Peggle 2, and Battlefield 4. Subscribers to EA Access will be able to download and play these four games for free. Unlike the special demos, these four games will feature unlimited access, so it is just like owning the game. However, like other programs of this ilk you will not be able to keep the games if you let your membership expire. Going off the current prices of those games on the Xbox Marketplace, it would cost you just over $100 to buy them all, making EA Access a definite deal if you were interested in the games but hadn’t purchased them yet.

Along with the four games comes a 10% discount on other EA digital titles. Anything produced by EA that is featured on the Xbox Games Store will be 10% off for EA Access members, including upcoming titles like Dragon Age Inquisition and NHL 15. This includes other membership programs as well, such as Battlefield Premium and FIFA Ultimate Team points.

And to help you decide what games to purchase with that discount EA Access will give you exclusive demos of EA games. “Membership in EA Access lets you experience trials of new EA games up to five days before the release date. It starts with Madden NFL 15, NHL 15, FIFA 15, NBA LIVE 15, and Dragon Age: Inquisition, but more are on the way. If you decide to buy the game, your progress will carry over so you can pick up right where you left off.”