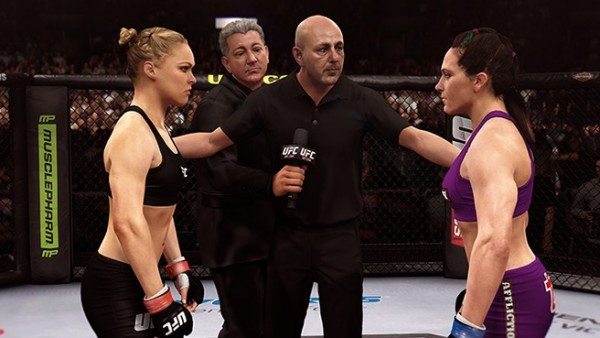 UFC 184 takes place this weekend with Ronda Rousey fighting against Cat Zingano. EA Sports UFC ran a simulation to predict who will come out on top.

Both Ronda Rousey and Cat Zingano are undefeated in MMA. One of them will lose this weekend and their winning streak will be over for good. EA Sports UFC is a pretty accurate game and has predicted fights correctly in the past. Let’s see who might win this UFC 184 encounter.

EA wrote all about the results of the EA Sports UFC simulation on its official website. The first round is expected to be a fast pace battle with both ladies striking a lot. Near the end of the first round, Rousey scores a takedown and finishes up with some ground and pound attacks. This ends the first round.

The second round as predicted by EA Sports UFC will also be a back and forth contest. Both ladies don’t want to stay on the ground for very long as they would rather stand up and fight. After getting backed up against the cage, Rousey gets angry and judo throws Zingano down to the mat. Rousey then puts in Zingano in an armbar. Zingano taps out and Rousey is declared the winner.

Do you agree that Rousey will win at UFC 184?

Update: EA Sports UFC correctly predicted the UFC 184 fight. Rousey did win by an armbar submission. However, the real fight only lasted for 14 seconds. Much shorter than the simulation where the fight went to the 2nd round.