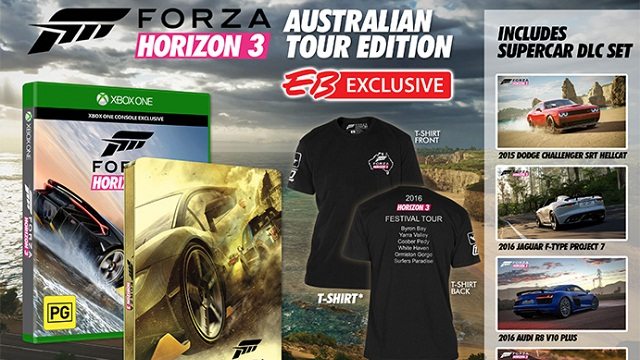 EA Games Australia has revealed a special edition for Forza Horizon 3. They are calling it the ‘Australian Tour Edition’ and it is exclusive to the retailer.

This exclusive edition of Forza Horizon 3 is available on September 27th, 2016 for the Xbox One version of the game. It will cost $AUD$99.95.

As of right now, this edition of the game is only available in Australian branches of EB Games. There have been no listings on the New Zealand EB Games website for this edition yet.

Australia is an important location because this is the country where the game is set in. The Forza Horizon series is well known for going to exotic looking locations and this third game is looking like the best one yet.

Not to mention it’s going to be the first Horizon video game to be available on the PC. If you have a powerful enough Windows 10 PC, you can play the game in glorious 4K. That’s not to say the Xbox One version looks shabby in comparison as that version looks good too.