The latest news in the world of video games at Attack of the Fanboy
March 30th, 2017 by Jose Belmonte 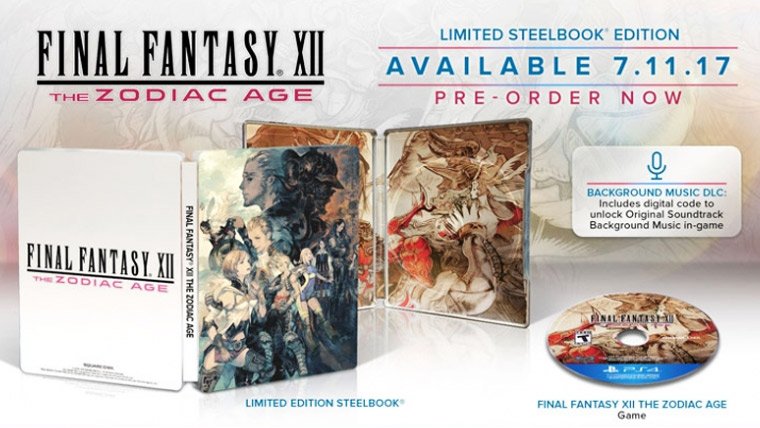 Ever since Square Enix announced the different editions in which Final Fantasy XII: The Zodiac Age was going to be released, those European fans who tried pre-ordering the version that comes with the game in a steelbook found that the so-called Limited Edition was not available neither through retailers nor the official Square Enix Store. However, now we can confirm that the Limited Edition has become available this week exclusively through select retailers.

The Limited Edition includes the game in a steelbook featuring artwork by Akihiko Yoshida on the cover. It’s a middle ground proposition in between the Standard and Collector’s Edition. In territories like North America, this version became available through the Square Enix Store or Best Buy from the day of the reveal, but the only versions that European fans could only find available through Square Enix or their local retailers were the Standard and Collector’s editions.

But now we can confirm that the Limited Edition is finally available to pre-order in European countries, although as opposed to other territories, this version is exclusive to select retailers in each country. Koch Media has confirmed to Attack of the Fanboy that the steelbook is available only through Game in Spain, while other sources have received the same information about the United Kingdom. Gamestop is offering the edition in Austria, Denmark, Finland, Germany, Italy, Norway, Sweeden, and Switzerland, while Micromania is admiting pre-orders in France.

There will be three editions of the game: the Standard comes with the game in a regular PlayStation 4 case, and the first shipment will include a reversible cover featuring artwork by Akihiko Yoshida. The Limited Edition, as mentioned earlier, comes with the game in a steelbook featuring Yoshida’s artwork, and a code to use the original version of the soundtrack as background music. And finally, the Collector’s Edition, exclusive to the official Square Enix Store, includes the game in a steelbook, a set of five busts of the Judge Magisters, and a six card art set.

Final Fantasy XII: The Zodiac Age will be released on July 11th.