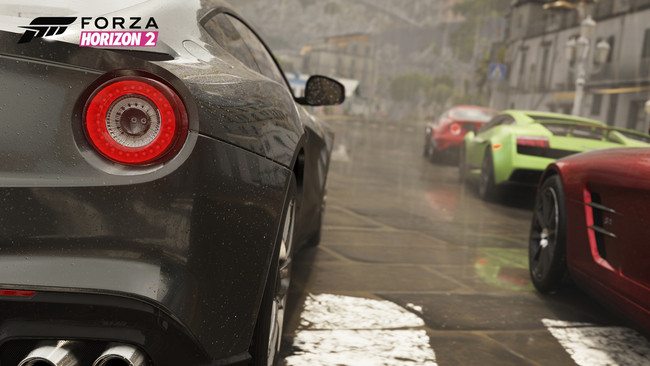 Later this year, one of the biggest gaming rivalries will be between a Microsoft exclusive and a Sony exclusive, Forza Horizon 2 and DriveClub. Releasing only one week apart from one another, the former on September 30 and the latter on October 7, there are bound to be a number of comparisons. One feature in particular that both games are touting is the introduction of weather, specifically rain, and as a result, it seems fitting to compare what we’ve seen so far.

Thanks to Gearnuke, we have two animated gifs that manage to show the comparison between the two regarding their weather physics. The DriveClub gif, which can be seen right here, looks absolutely phenomenal in action. From the raindrops hitting the windshield, to the realistic look of the rain on the pavement, this possibly looks to be some of the best use of rain physics in a video game. Evolution Studios is even saying that this is merely from an early build of DriveClub as well, so it could look even better when it is released.

Forza Horizon 2, which you can see in action right here, is really pushing the addition of weather to the game, but from what we’ve seen so far, it really seems to pale in comparison to DriveClub. This is not to say that the final product won’t be at the same level or possibly better, but from the early looks we’ve been provided, DriveClub looks to be the winner in this department. Regardless, both games look like they are implementing this very well, even if one appears to look better right now.