The latest news in the world of video games at Attack of the Fanboy
December 8th, 2017 by Jose Belmonte 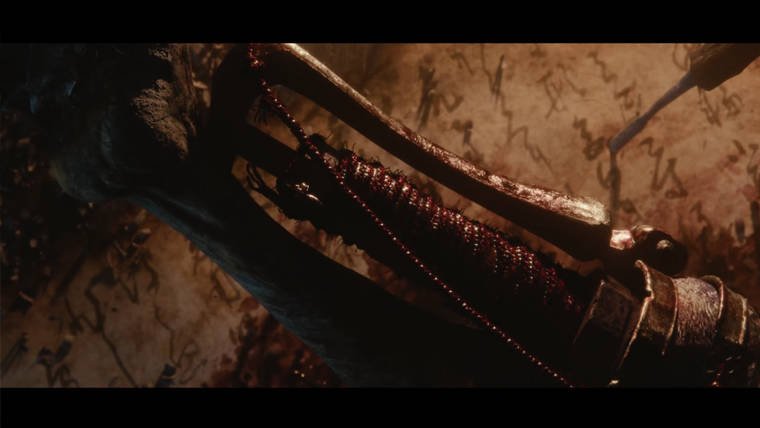 From Software, the acclaimed developer of the Dark Souls franchise, showed a very short preview of their new game last night at the Game Awards. However, don’t expect many details on the project, as the video has been made as criptic as possible on purpose to leave fans wondering what is it about. In the few seconds of footage, the trailer shows an image of an artifact covered in blood and stucked in what appears to be a human bone. The final message is as criptic as the image preceding: “Shadows Die Twice.”

The only other bit of information we got came from From Software’s Yasuhiro Kitao, who said on Twitter that fans would get more information on the project within the next 12 months, which most definitely rules out a proper reveal at this weekend’s PlayStation Experience.

Obviously the video has succeeded in sparking all sorts of speculations, pointing at whether the new game could be related to any of From Software’s most popular franchises. While many fans are hoping for a Bloodborne sequel, others have paid attention to the handwritten text in Japanese that can be seen in the background of the video, as well as the traditional Japanese instruments that can be heard, raising the suspicion that it would actually be a new Tenchu. Coincidentally, the term “shadow” is often used in the lore of the ninja series in relation to the underworld and characters who have had near-death experiences.

Whatever it is, it seems we are in for a long wait until we get some specific details. Watch the video below.

From Software The Game Awards
We're Looking For Contributors