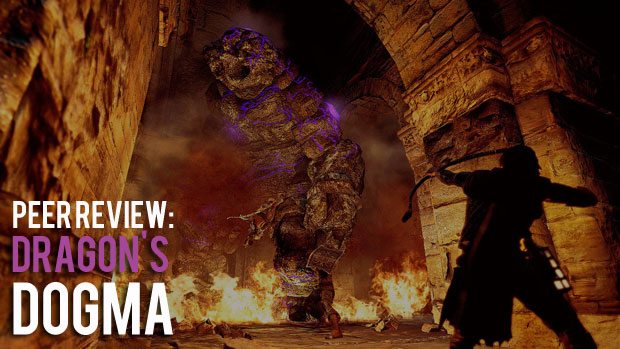 Capcom’s latest release seems to have critics inable to agree on whether the game is great or absolutely horrible. The brand new franchise for Capcom marks a different type of adventure than what the publisher has been throwing at its fan-base in recent history. By most accounts its a cross between Skyrim and Dark Souls, two of the best RPG’s of 2011. The problem is, not everyone gives this RPG the thumbs up.

Scores from respected gaming publications range from 90 all the way down to 40 on a 100 point scale. Some feature glowing praise, while others shred the ambitious title in nearly every aspect. Here are a few review scores from Metacritic and other sources.

Beefjack – 93 – Dragon’s Dogma is still a phenomenal piece of work. Very little of the game is particularly original, true, but it does a fantastic job with all the different influences it’s riffing on or building on top of.

Game Revolution – 90 – The level design and unforgettable bosses surpass even that of Skyrim. In that light, its noticeable hiccups become merely growing pains in the face of a powerful, new idea, one that’s sorely needed in an industry saturated with sequels and spin-offs. Inspired by both Dark Souls and Skyrim in almost all the best ways possible, it presents an open world that’s wrought with danger, yet begging for adventure, and shows that Capcom is ready to take a leap of faith. And so should you.

Game Trailers – 87 – If you’re the kind of player that can get completely lost in these sorts of open world RPGs, you’re going to eat Dragon’s Dogma alive. However much its reach exceeds its grasp in certain respects, this ambitious game succeeds in taking the form in an altogether welcome direction–one that does not sacrifice minute-to-minute gameplay on the altar of expansiveness.

Game Informer – 85 – Combat feels like a necessary part of the game’s design, rather than something that was begrudgingly added to provide interaction between cutscenes. I left the game feeling that I made my mark on Gransys the way I chose to, instead of being escorted from plot point to plot point. When you’re talking about an open-world game, I can’t think of higher praise.

EGM – 75 – Dragon’s Dogma is a fascinating and very enjoyable new take on the fantasy genre by Capcom, one that has a lot of promise held within it—but one which also sees some of that promise squashed due to the inclusion of an unneeded and annoying gimmick.

Destructoid – 75 – Just be aware that, for all the absorbing and exciting things to be found in Gransys, there are almost as many disappointing and infuriating things to let you down. Just grit your teeth, fight through the pain, and the rewards are there.

Polygon – 70 – Like many of the Western RPGs that influenced it, Dragon’s Dogma is an uneven experience, but it’s one that rewards patience and perseverance, and it’s a bold argument for why Japanese developers should continue making RPGs, with or without the inspiration from this side of the Pacific.

Edge – 70 – When Dragon’s Dogma succeeds, it offers a potent piece of alchemy – a studio that helped define the Japanese action genre redefining the Japanese roleplaying game. Capcom might not have crafted the kind of world in which players will invest, but it understands the powerful draw of party building and gear tweaking, the immediate thrills of slashing and spellcasting, and the spirit of adventure in sallying forth on a dragon hunt.

Eurogamer – 70 – Dragon’s Dogma is a game soundtracked by screaming guitars and a hyperactive orchestra; a game whose story is told with showboating faux-Shakespearean flourish; a game set within acres of countryside scrawled with boastful castles; a game fronted by a hero whose heart has been plucked from his chest by a dragon’s fingernails. Despite all of this, it is also a game that understands the value of understatement.

Now Gamer – 61 – The combat is usually pretty satisfying, if sometimes clumsy to the point of being unfair, and even if the ‘unique’ stuff falls mostly very flat, RPG fundamentals like exploration, character development, customisation, looting, crafting and storytelling are executed to a decent standard. The problem is that there are several much better RPGs around right now.

Official Xbox Magazine – 60 – Much like the main character’s chest cavity, this RPG ultimately feels hollow, with no real heart.

Joystiq – 40 – Any brief flickers of fun I came across were consistently extinguished by the game’s oppressive flaws.