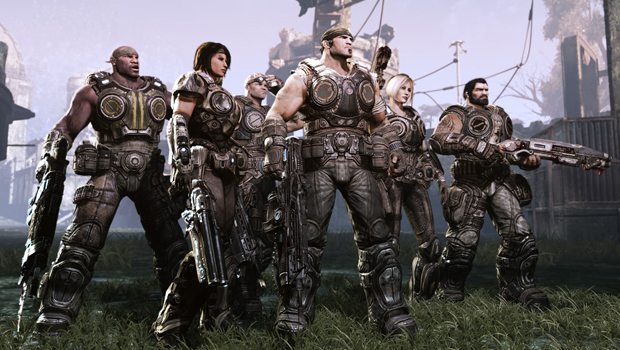 Society has collapsed, the COG military has disbanded, and you and your small team have narrowed your objectives to a singular goal: survive. These are the obstacles you’ll be facing at the outset of the highly anticipated Gears of War 3, and Epic has recently released a new “making of” video which describes how character development will play a large role in the game’s story. Rod Fergusson, Epic’s executive director, stated how Gears of War 3 will be less about the battle to save humanity and more about the relationships of the game’s various characters:

“Gears of War 1 was really about a battle, Gears of War 2 wanted you to feel like you were part of a war. With Gears of War 3 we wanted to take the scale of the story down and make it personal.”

Fergusson is most likely referring to the relationship between Marcus and his father Adam Fenix, who we caught a glimpse of in the Gears 3 trailer. Marcus is seen viewing a message from his father who supposedly has a plan to defeat the Locust invasion. Expect much of the campaign to be relating in one way or another to that plan. However, judging from the video, the story of Cole Train and the theme of loss will also be emphasized. Cole not only lost his wife and children as a result of the war, he lost the football career that once encompassed his life.

Cliff Bleszinski similarly stated how Epic is attempting to create an emotional connection with players as the trilogy reaches its end, saying, “We’re really watching these final scenes that have played out in front of us at the end of the trilogy. It’s hard not to get a little attached to the characters, that universe and everything that goes on in it.”

It goes without saying that some of the backdrops and environments that players will be able to experience in Gears 3 are pretty stunning, and that is definitely evidenced in the video below. Gears of War 3 will reach it’s thrilling conclusion on September 20th.