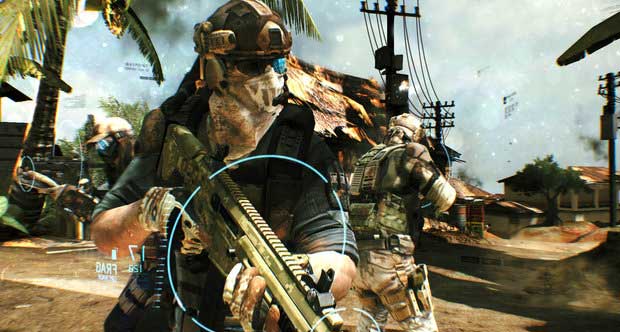 Today we took Ghost Recon Future Soldier’s Multiplayer for a spin.  On show, was the “Conflict” mode.  Being a fan Advanced Warfighter, I have to admit the delays have made me a little leery of the title.  From all of the trailers and gameplay we’ve seen, we know the game looks the part, but does it play it, and stay true to it’s predecessor?

It didn’t take long to answer that question.  The game instantly feels familiar, but also feels like the first true next-generation Ghost Recon title in a number of key areas.  Mainly, in the graphics and controls.  A competent cover system, a true class based mechanic that extends the dynamic of the multiplayer, and it’s wrapped up in a nice looking package.

Being shown on the Xbox 360, Ghost Recon Future Soldier’s “Conflict” Multiplayer mode, was obviously used to showcase the game’s focus on the class based warfare.  Objectives placed around the map were being battled for in a constant tug of war, where you were given the option to choose between multiple classes.  You can change your class on the fly at each spawn, and being that I died quite a few times, I got to play with The Rifleman, The Engineer, and the Scout.  Of the most interesting characters were the Engineer and the Scout.  They had special abilities that could be used to turn the tables on your enemies, in the form of a Drones & Monitors which would give away the enemy locations.

The level which we played on looked fantastic.  Littered with cover, it gave you ample opportunity to check out the new cover system, and the ability to attach, peek, and fire off round at your opponents.  The sniper class was even better with the cover system, as popping out also brought up a cloaked mode where you could take time and survey the battlefield without anyone being the wiser.

When Ghost Recon launches early next year, expect GRAW fans to feel right at home with this next installment of the franchise.