The latest news in the world of video games at Attack of the Fanboy
January 14th, 2017 by Dean James 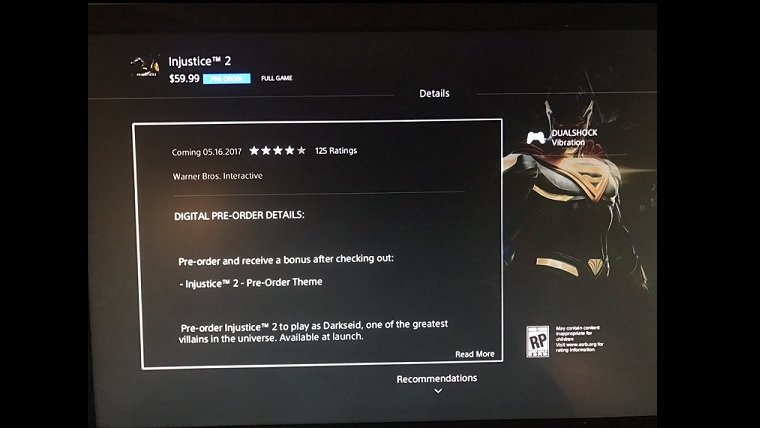 Injustice: Gods Among Us brought us the really fun story based DC Comics fighting game we’ve always wanted and we have been waiting for a sequel ever since the DLC finished up. It has been announced that more reveals are finally coming this next week for the game, but the PlayStation Store has revealed a character that appears to be a pre-order bonus for the game.

The PlayStation Store and its listings have previously been a source of many leaks and their latest involves Injustice 2. Along with the details of the game in the description, the listing also detailed pre-order bonuses and listed two items.

The first is just a simple Injustice 2 Pre-Order Theme, but the other is much more interesting, as it stated that Darkseid would be coming to the game as a pre-order bonus, which was screencapped by a member on NeoGAF. Not long after this was spotted, the listing for Injustice 2 was removed completely from the PlayStation Store, with it since going back up again minus the mention of Darkseid.

This news is not all that surprising at all considering that Mortal Kombat X featured Goro as a pre-order bonus for the game. Darkseid would be a good fit for that role, though there is no question people will be disappointed.

Thankfully, those who didn’t pre-order Mortal Kombat X didn’t have to wait long to be able to outright purchase Goro, so that’s likely how it will be with Darkseid as well if he is indeed a pre-order bonus.

Considering the listing has been taken down, it’s always possible that this was a mistake and either Darkseid isn’t coming or he is coming but isn’t a pre-order bonus. However, considering this was posted to the official PlayStation Store, it’s very likely that this is legitimate and was just removed so that they could make the official announcement later.