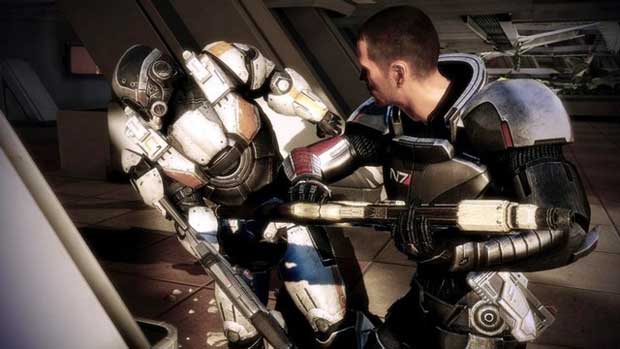 Mass Effect 3’s producer Casey Hudson recently shed some light on the new combat features in the lastest installment of the Mass Effect franchise.  A game that has evolved with each game in the series, it’s no surprise that Bioware is tweaking things yet again.  Hudson told PC Gamer, that “it’s quite different, that’s where we’re putting a lot of our fun new special activities, around these new abilities that they have.” Hudson told the magazine.

“So we’re giving them heavier melee stuff that they might do, or one of them is able to suck back the health of the enemies you’ve killed around it. So as you’re killing enemies next to it, your squadmates are working on this character, and it’s able to suck in the health.”

“One of them is the Atlas that you saw, so it’s the big kind of mech thing. The cool thing about that is obviously once you see it moving, you get more of an idea of what it’s about – it’s a massive, heavy thing that’s got a huge cannon on it,” he said when asked about specific damage on other enemies.

“But it’s piloted by a Cerberus trooper that’s on the inside – you can actually see him in there, and if you concentrate on the little glass shield that he’s behind, if you can take that shield out. Then you can damage the guy that’s in there, and then you kill the guy and the machine’s dead. Or likewise if you kill the machine, then the guy can hop out and you fight him. So there’s some fun stuff in there in terms of fighting a machine that’s actually piloted by a guy.”

The combat does seem like its taking a new direction, but the special class based abilities sound like they could really change the way you attack a situation.  I loved the combat in the original Mass Effect, and when Mass Effect 2 released, I was simply blown away by how much better it had turned out.  Hopefully we’ll get hands on with Bioware’s latest at E3 in just a hand(s) full of days.