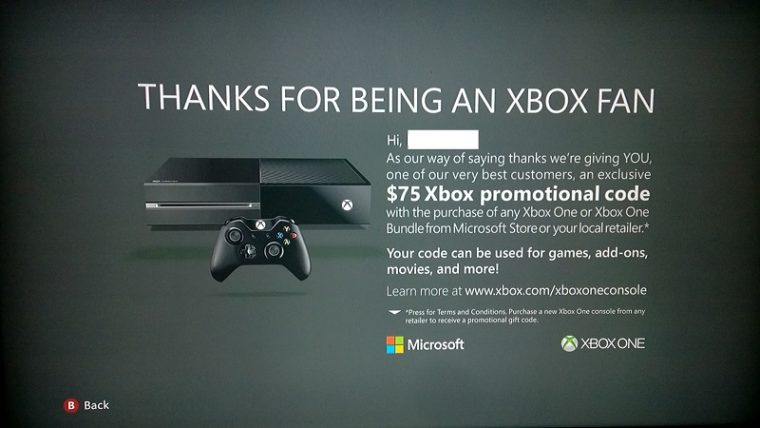 According to a post by NeoGaf user BeforeU Microsoft is sending out notices to select Xbox 360’s offering them a $75 promo code if they purchase an Xbox One by the end of July. The offer popped up when they first turned on their Xbox 360, and the offer stipulates that it is only for users who receive the notice. Other users have received the message as well, so this does seem to be a nationwide promotion.

Many of the users who received the notice already purchased Xbox Ones before the offer. While the offer’s terms and conditions say that the Xbox One must be purchased between 7/7/2014 and 7/31/2014, many have been told that they will be able to receive the credit as well. The statements have been pretty mixed so far though, some have said to contact Xbox Support, while others pointed users to the forums. If you receive the offer and already have an Xbox One I recommend calling Xbox Support at 1-800-4MY-XBOX.

The offer can be redeemed by purchasing any model of Xbox One, including the new $399 Kinect-less version. Once you have activated the Xbox One on the same Xbox Live account that received the offer you are all set. Some time before August 15th you will receive a message on your Xbox One with the gift code for the $75. The code must be redeemed by October 15th 2014, and spent by October 14th 2015 or the funds will become invalid. The $75 is only valid at certain Xbox stores and participating Microsoft online stores. 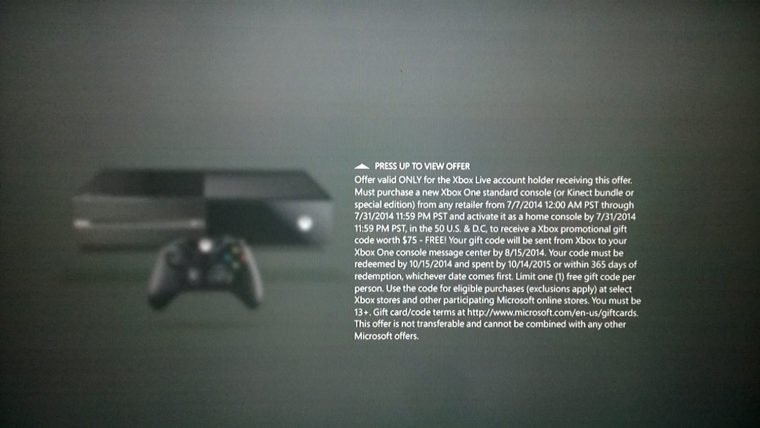 With great games like Halo: The Master Chief Collection, Destiny, and Sunset Overdrive hitting the Xbox One during the promo period this is a great deal for new Xbox One owners. Make sure you check out your Xbox 360 soon to see if you made it into the promotion, and good luck.