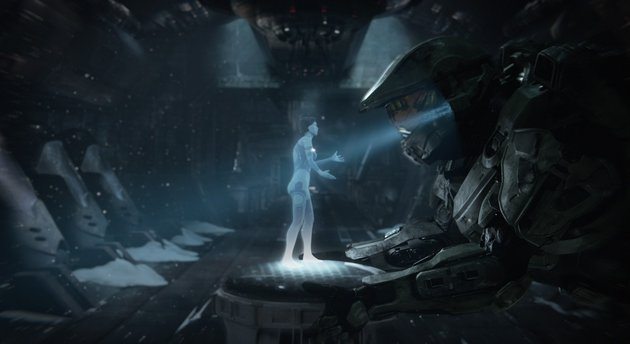 Halo 4 is the game that Halo fans have been waiting for ever since Master Chief was set adrift at the conclusion of Halo 3.  Following the the E3 2011 reveal of Halo 4, we all knew that Master Chief would make his return, but how the story will play out has been a mystery.  In a recent interview with Frank O’ Connor of 343 Industries, Xbox World gets the details about the upcoming shooter and the evolution of the Spartan aesthetically.

“There’s some fairly radical modifications to his armor,” said O’ Connor in the interview.  Which was confirmed by the Chief’s missing cod peice in the reveal.  “Some of those are an artistic evolution, but some are connected to the story.  We can’t talk about it yet.  He’s been in space for a long time.”   At this point it’s safe to say that the story will pick up where Halo 3 left off, albeit quite some time into the future.

Cortana will once again be along for the ride, but the story complications that arise in the sequel have her nearing the end of her lifespan…again.  O’ Connor details a state of “rapancy” for the character from exposure to “more information than any other AI in existence.”

With Cortana’s expiration date on the horizon, you can expect at least a partial thread of the plot in Halo 4 will be for Master Chief to find some way to assist her.