New Pokken Tournament Fighter To Be Revealed On July 14 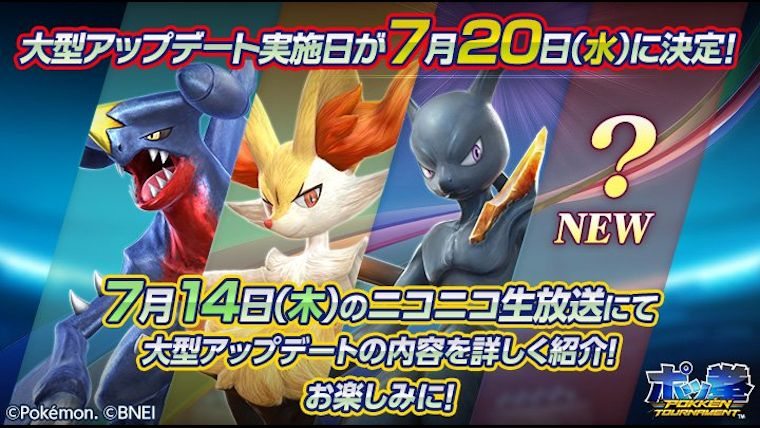 Pokken Tournament released back in March on Wii U in the US, following the arcade run in Japan that is still ongoing. The arcade units have less characters than the home version, with three console exclusives now coming to the arcade, but another announcement is set to be coming soon.

As announced through the official Pokken Tournament Japanese Twitter, an update will be coming to the arcade version of Pokken Tournament on July 20 that will add the likes of Garchomp, Braixen, and Shadow Mewtwo. However, they also threw in a tease for another reveal.

On July 14, there will be a NicoNico livestream that will reveal a brand new character that will be coming to the arcade units of Pokken Tournament on July 20 as well.

There have been rumors lately of possible additions through those that datamined the game, which include Scizor, Empoleon, and Darkrai, but we have no idea if this new fighter could be from this bunch.

This reveal is said to be for the arcade version of Pokken Tournament, but you’d have to think they’d bring any new Pokemon to the Wii U version as well through DLC. Considering the success of Mario Kart 8 and Super Smash Bros. with DLC, they would be crazy not to take advantage of that.

Make sure to stay tuned for details on the livestream in a couple weeks and hopefully any details of DLC for the Wii U version as well.